Home » World News » Mega jail that will be home to 1,440 prisoners gets go ahead

Mega jail that will be home to 1,440 prisoners gets go ahead

Mega jail that will be home to 1,440 prisoners gets go ahead despite 3,300 complaints including from the police

Plans for a ‘mega jail’ in Yorkshire with up to 1,440 inmates have been approved by Tory councillors – despite 3,300 complaints being lodged.

The Category C jail, which has been dubbed a ‘monstrous eyesore’ is expected to be built next to HMP Full Sutton, a maximum-security prison with a capacity of 608.

Some eight Tory East Riding councillors – with the exception of Wolds Weighton councillor David Rudd – voted in favour of the plans, with a total of four against. 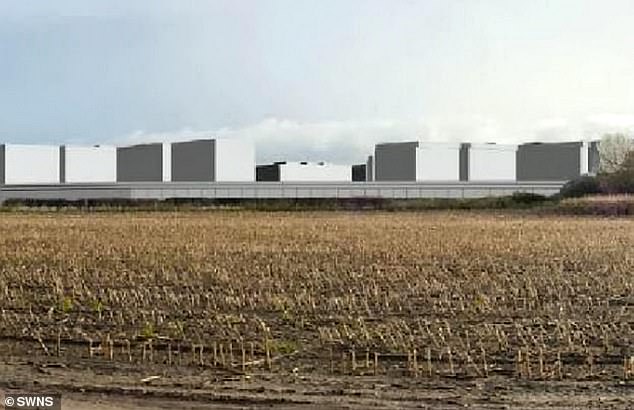 The Category C jail, which has been dubbed a ‘monstrous eyesore’ is expected to be built next to HMP Full Sutton, a maximum-security prison with a capacity of 608 (artist’s impression)

Mr Johnson announced a prison was going to be built last month when he pushed for reform in an article for the Mail on Sunday.

The ‘mega jail’ forms part of the PM’s pledge to create an extra 10,000 prison places nationwide and is expected to create more than 700 jobs in the area.

But disgruntled campaigners took to the streets of Beverley yesterday during a protest outside the town’s County Hall ahead of a planning committee meeting.

And even Humberside Police objected to the jail, fearing it would increase violent crime within the building and raise demands on the force.

What is a Category C jail?

Category C means prisoners cannot be trusted in open conditions but they are not expected to make an escape attempt.

Inmates are serving more than a year in prison or back in prison after a previous 12 months sentence.

And crimes they may have committed include violence, arson, drugs, threat of violence or sex-related offences.

Speaking after the meeting Fiona Roberts, a member of the campaign group No Mega Prison At Full Sutton, said she feared the nearby village of Full Sutton would become a ‘prison fortress’ and said the plans’ approval was ‘a huge mistake’.

She said: ‘I think Full Sutton will take an enormous beating from this in terms of traffic, in terms of prisoners coming out on day release and in terms of homeless prisoners being released.

‘I think traffic through these country lanes will be a real hazard. I believe lives are likely to be lost because of ambulances being held up in Stamford Bridge – I think it is a huge mistake.’

Miss Roberts said they would explore the possibility of a judicial review but first would have to consider the cost.

Outline planning permission was given in 2017 to a jail with 50 per cent fewer prisoners, which sparked just 52 objections. 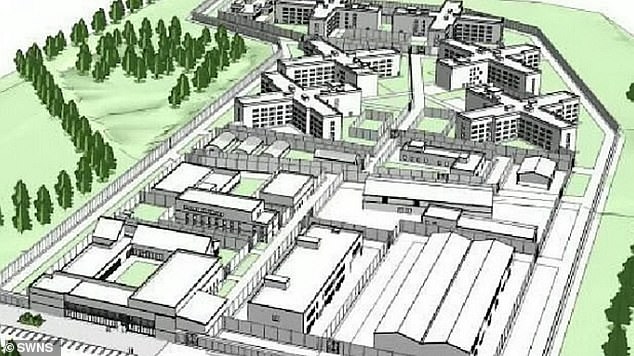 The ‘mega jail’ forms part of the PM’s pledge to create an extra 10,000 prison places nationwide and is expected to create more than 700 jobs in the area (artist’s impression)

Since then fears traffic jams could double in nearby Stamford Bridge, where a bridge is used by holidaymakers to get to the coast, have grown.

There were further concerns tens of thousands of litres of sewage would have to be tankered away as there is no room for an on-site treatment plant.

Independent councillor Phil Davison, who voted against, said with just 50 inmates more the new jail would be the second-largest in Europe or the biggest in the UK.

However, committee chairman Coun Gary McMaster said even if the plans were refused, they would ‘go ahead whether we like it or not.’ 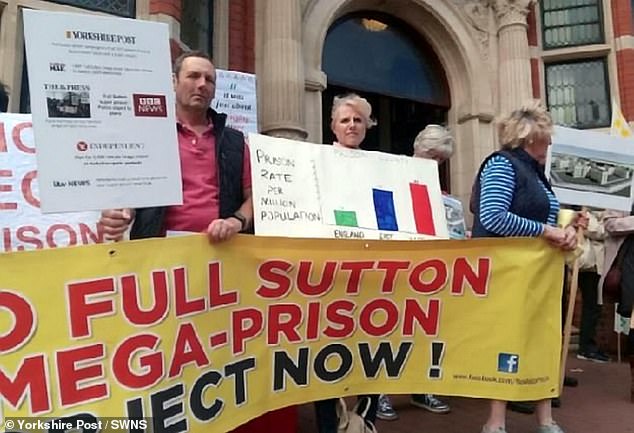 If it went to appeal, he said: ‘It is very likely to be overturned and the council will lose the right to impose any conditions whatsoever and that worries me.

‘We do not wish to lose whatever little grip we have.’

The total number of staff and inmates at the new facility and the existing prison – as high as 3,300 – will be up to seven times greater than the village’s 470-strong population.

Speaking after the meeting, she said: ‘The new jail at Full Sutton is the first milestone in our long-term plan to deliver 10,000 additional modern and efficient prison places.

‘It will create and support hundreds of jobs, during construction and afterwards, and will be a major boost to the local economy.

‘The prison will also provide a better environment to steer offenders away from crime – ultimately keeping the public safer and reducing the number of future victims.’