Married lance corporal, 31, is cleared of sex assault after he ‘shocked male soldier by repeatedly groping his leg’ after boozy barbecue

A soldier in one of the British Army’s most prestigious regiments has been cleared of sexual assault after he was accused of repeatedly stroking a male colleague’s leg.

Lance Corporal Jordan Lloyd was accused of groping the soldier after entering his bedroom following a boozy barbecue.

The 31-year-old is part of the Queen’s Royal Hussars – the most senior armoured regiment in the British Army – which boasts the Challenger 2 main battle tank and is famed for its links to Winston Churchill.

The court heard ‘jolly drunk’ LCpl Lloyd asked to use the young soldier’s toilet after the work barbecue, but then locked the two of them in the room and asked to stay the night.

The man, who cannot be named for legal reasons, agreed initially but claimed he ‘very stressed and unsure of what to do’ after LCpl Lloyd allegedly started touching his leg and ignored requests for him to leave. 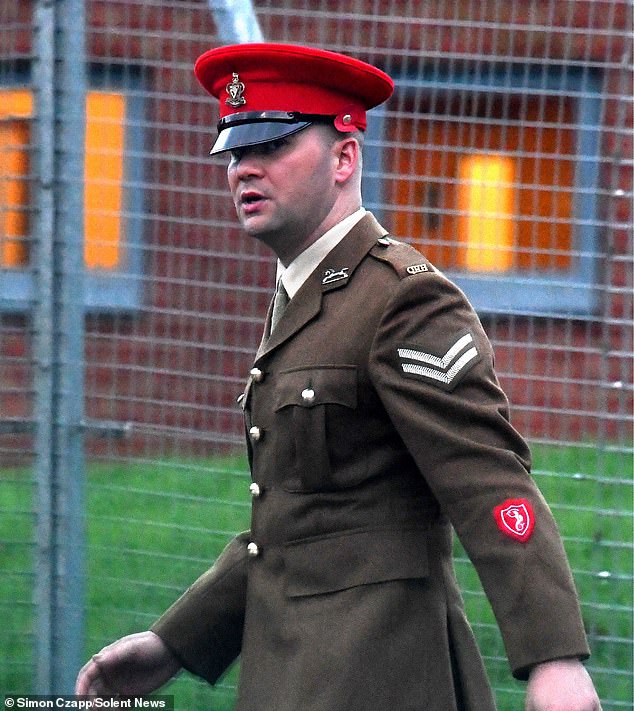 Now he has been cleared of all charges following a trial at Bulford Military Court, Wilts.

The soldier told the hearing that LCpl Lloyd began stroking his leg while they sat on his single bed watching a film on the soldier’s phone, and he then ‘froze’.

He continued: ‘I didn’t know what to do. When I built up enough courage to say something and move, I moved away from [LCpl Lloyd] and said ‘you need to leave’ to which he replied, ‘no, I’m staying’.

‘He proceeded to grope my left leg again – this time for a shorter amount of time as I had more courage. I said ”no, stop – you need to leave”.’

The soldier alleged LCpl Lloyd, who was married, then groped his leg for a third and fourth time.

He claimed LCpl Lloyd had moved ‘slightly further up’ his leg each time he touched it.

He said he was eventually able to leave his room when LCpl Lloyd was ‘distracted’ by something on his phone.

LCpl Lloyd denied the leg touching occurred at all and was cleared of both charges.

The regiment is famed for its association with Winston Churchill, who joined the 4th Hussars in 1893, serving for five years.

In 2019 the Queen’s Royal Hussars, which has been operating under various names since its inception in 1685 and awarded 172 Battle Honours and eight Victoria Crosses in that time, relocated from Germany to Tidworth Camp, Wilts.