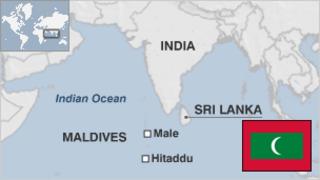 The Maldives is a republic lies south-west of the Indian sub-continent. It is made up of a chain of nearly 1,200 islands, most of them uninhabited.

None of the coral islands stand more than 1.8 metres (six feet) above sea level, making the country vulnerable to any rise in sea levels associated with global warming.

The economy revolves around tourism, and scores of islands have been developed for the top end of the tourist market.

Its political history has been unsettled since the electoral defeat of long-serving President Maumoon Abdul Gayoom in 2008.

Abdulla Yameen acknowledged his defeat in the September 2018 presidential election, which was won by opposition leader Ibrahim Mohamed Solih in a surprise result.

Mr Nasheed, the Maldives’ first democratically-elected president in 2008, resigned in 2012 after weeks of opposition protests which he described as a coup.

Political turmoil flared again early in 2018, when Mr Yameen refused to obey a court order to release nine political prisoners. The main opposition said the refusal amounted to a coup. The president declared a state of emergency.

Mr Yameen is a half-brother of Maumoon Abdul Gayoom, whose autocratic rule lasted 30 years until 2008. Mr Yameen himself took steps to restrict opposition protests against his government, and caused concern among neighbouring states over his close economic ties with China.

Non-state media report coming under pressure, and Reporters Without Borders says journalists operate in a climate of violence and impunity.

1558-1573 – Portuguese occupation, which ends after expulsion by locals.

17th century – Islands become a protectorate first of the Dutch rulers of Ceylon (Sri Lanka) and later of the British, who take control of Ceylon in 1796.

1965 – Full independence as a sultanate outside Commonwealth.

2012 –President Mohamed Nasheed is ousted in a coup.