Labour frontbencher Sir Keir Starmer was accused last night of mounting a secret operation to supplant Jeremy Corbyn and install himself as the head of an anti- No Deal Brexit unity government.

It comes amid claims that the Labour leader is warming to the idea of a temporary Prime Minister being appointed to ask Brussels for a Brexit extension – as long as it is not a Labour figure.

But sources claim the Shadow Brexit Secretary is running a covert bid to outflank Mr Corbyn by building up a base of moderate Labour MPs to back him as the only credible unity PM.

Allies of Sir Keir – who backs a second referendum on any Brexit deal – are said to be telling Labour MPs he is the one who can win over enough Tory rebels and Liberal Democrats to form a unity government if Boris Johnson is forced out. 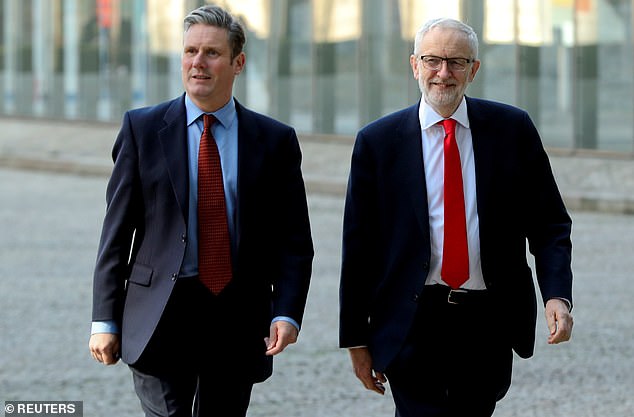 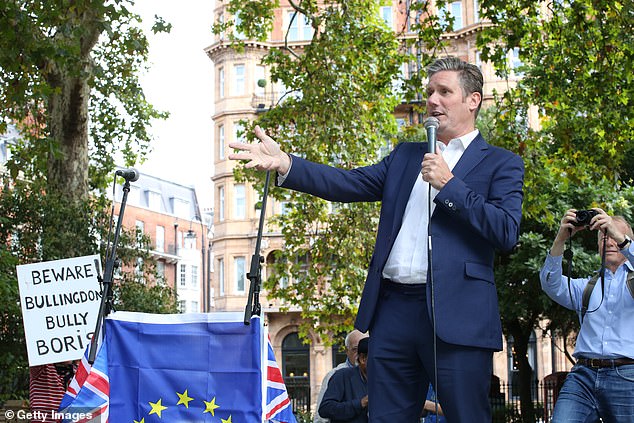 Keir Starmer, Labour MP for St Pancreas and Holborn and Shadow Brexit Secretary, speaking at the Russell Square Rally against Brexit in August

The claims come as it emerged that Sir Keir has said ‘a lot of people’ believed that Labour ‘would do better with a different leader’.

Senior Labour insiders suggest that Mr Corbyn is warming to the idea of a caretaker Prime Minister being installed to ask for a Brexit extension should Mr Johnson refuse and lose a confidence vote.

In that situation, any MP would have two weeks to prove they could command a majority in the House of Commons and become Prime Minister.

Crucially, Mr Corbyn and his coterie have made clear this temporary premier could not be another Labour MP, but he understands he would be unable to form a majority in the circumstances.

The new PM would be tasked with two things by MPs: asking Brussels for an extension and triggering an immediate General Election.

However, others in Mr Corbyn’s circle deny he is softening his stance on a caretaker PM.

Allowing a pro-EU figure who is already retiring, such as Ken Clarke, to step in would avoid Mr Corbyn being punished by voters for being the one to seek the politically toxic Brexit extension. 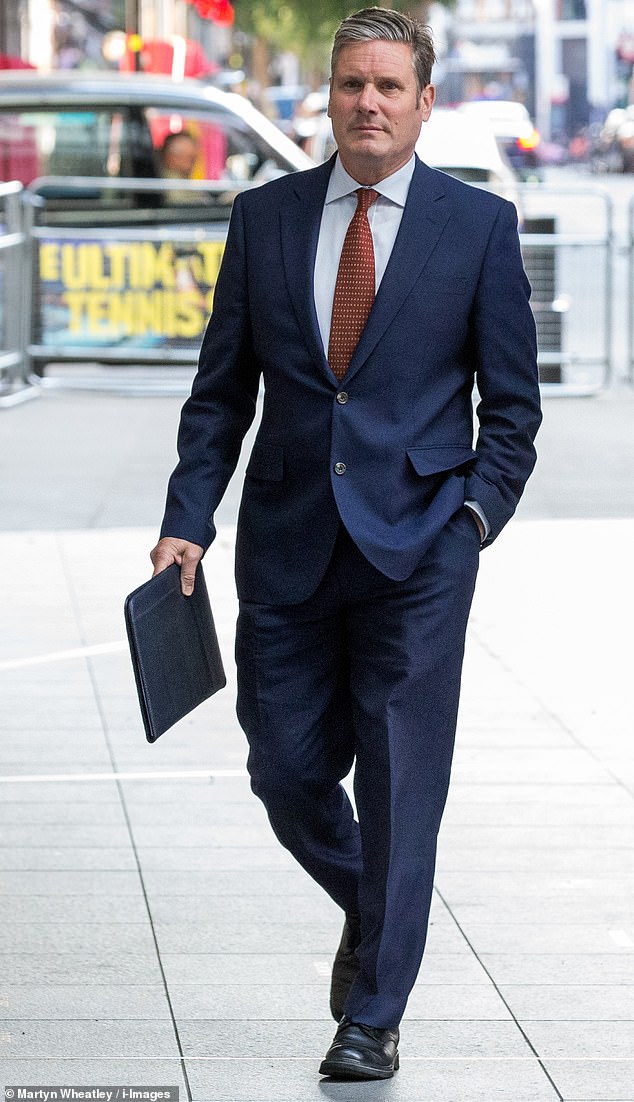 Labour strategists also fear that Mr Johnson, who they believe would stay on as Tory leader even if he was forced to quit as PM, could ‘steal the march’ with a two-week headstart on a General Election campaign if Mr Corbyn embarked on a futile attempt to form his own Government.

Mr Corbyn’s potential climbdown puts him on a collision course with Sir Keir, who is emerging as one of the most powerful figures in the Labour Party outside the leader’s tight-knit hard-Left bloc.

The Shadow Brexit Secretary was recorded telling business leaders in Sunderland that he was ‘well aware’ that Mr Corbyn was unpopular with some voters.

Labour insiders claim Sir Keir’s ‘shadow operation’ to supplant Mr Corbyn comes after Tory Brexit rebels and Lib Dems made clear they could never support the Labour leader to head any interim government in the wake of Mr Johnson being forced out.

Some also claim the party’s Brexit spokesman would be far better placed than Mr Corbyn to head a post-election Labour minority government if the party needed Lib Dem and Tory rebel votes.

‘It’s about building enough of a base within the party by saying only he can appeal to the Lib Dems and the Tory rebels as the head of a post-Boris unity government. 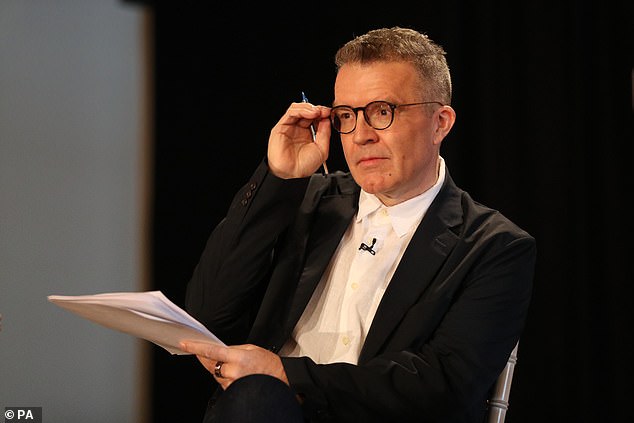 The MP claimed that North London MP Sir Keir had an operation in every region of the country to overcome his metropolitan Remainer reputation and woo as many Labour MPs as possible.

One Corbyn ally even alleged the Brexit spokesman was in league with Labour Deputy Leader Tom Watson who defied Mr Corbyn last week by insisting the party must campaign for a second referendum ahead of a General Election.

The ally said: ‘There have been suspicions that Tom and Keir have been working together on this.

‘But there’s no way a figure like Keir can appeal to Labour voters across the Midlands and the North who voted for Brexit and will simply not put up with North London MPs betraying their referendum vote.’

In comments at a meeting in Sunderland reported last week, the Shadow Brexit Secretary admitted many voters wanted a different party leader to Mr Corbyn.

He said: ‘I’m well aware from discussions around the UK and door-knocking and campaigning and canvassing that a lot of people think we would do better with a different leader.’

Sir Keir stressed this was not his own opinion. He pointed out that many people liked Mr Corbyn and that the elected party leader would take Labour into the next Election. 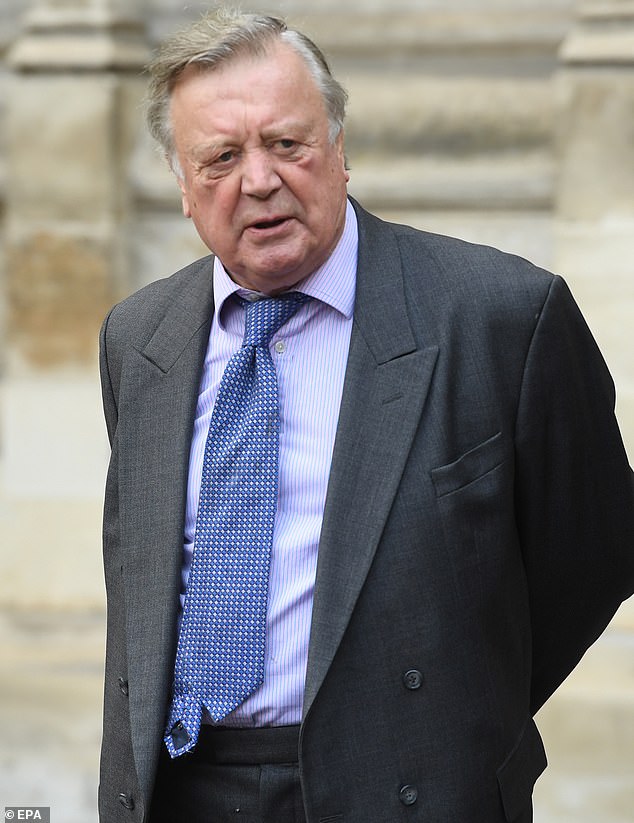 Allowing a pro-EU figure who is already retiring, such as Ken Clarke (pictured), to step in would avoid Mr Corbyn being punished by voters for being the one to seek the politically toxic Brexit extension

In a further hint that Mr Corbyn was willing to compromise and back a caretaker PM, the Labour leader said last night that he would do ‘all we can’ to prevent the UK leaving the EU without a deal.

Speaking in Scotland he said: ‘Opposition parties have worked very closely on this.

‘We will do all we can to prevent that No Deal crash-out because of all the damage that will do to jobs, living standards, supply chains, food supplies and medicine supplies, and if it happens we’re absolutely determined to bring this Government to account, to make them answer for their irresponsible behaviour over the last few days.’

The Labour leader was addressing workers and trade unionists at a rally following the Fighting For Our Future march in Kirkcaldy in Fife.

He said: ‘It doesn’t matter what you think privately – you shouldn’t undermine Jeremy by saying lots of people want a different Labour leader.’

Last night, a source close to Sir Keir denied the plot reports, insisting it was ‘complete nonsense’ to suggest he was manoeuvring to become interim PM.