Killer, 37, apologises to father of victim, 20, as he is jailed for 19 years for murdering ‘drugs enforcer’ brother of two Islamist fighters who died in Syria 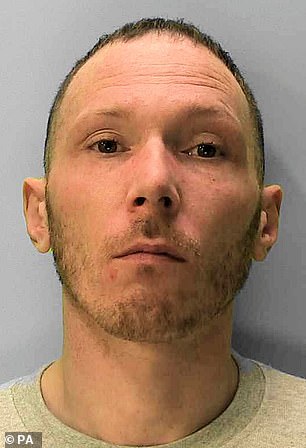 Daniel MacLeod, 37, has been jailed for life after he left ‘drug enforcer’ Abdul Deghayes, 20, to bleed to death on a Brighton street after stabbing him in the leg, arm and buttocks and driving away

A killer apologised to his victim’s father in court after he was jailed for at least 19 years for murdering the brother of two Islamist fighters who died in Syria.

Daniel MacLeod, 37, left ‘drug enforcer’ Abdul Deghayes, 20, to bleed to death on a Brighton street after stabbing him in the leg, arm and buttocks and driving away.

Residents heard a crash on the busy central Brighton street and found Mr Deghayes in the driver’s seat of a silver Volkswagen Polo with eight stab wounds.

MacCleod and his friend had met Mr Deghayes and another male at Hannover Court in Brighton, where the stabbing took place on 16 February last year.

Bleeding to death from an arterial wound, Mr Deghayes drove around the corner to Elm Grove where he lost consciousness and crashed into a parked car.

He is the son of Abubaker Deghayes, former leader of al-Quds Mosque in Brighton and the twin brother of Abdullah, 18, and sibling of Jaffar, 17, both from Brighton, who both died fighting with Islamists in Syria.

They are survived by fourth brother, Amer, a former finance student.

MacLeod was convicted of murdering Mr Deghayes after a retrial at Southwark Crown Court.

He claimed he acted in self-defence and during his first trial at Hove Crown Court last year.

His barrister Philip Evans QC described Mr Deghayes as a ‘drug enforcer’ who traded on his brothers’ terrorist reputations to bolster his own notoriety.

Mr Evans showed jurors a picture of a man posing with a 35cm long machete, with a profile name listed as A1. 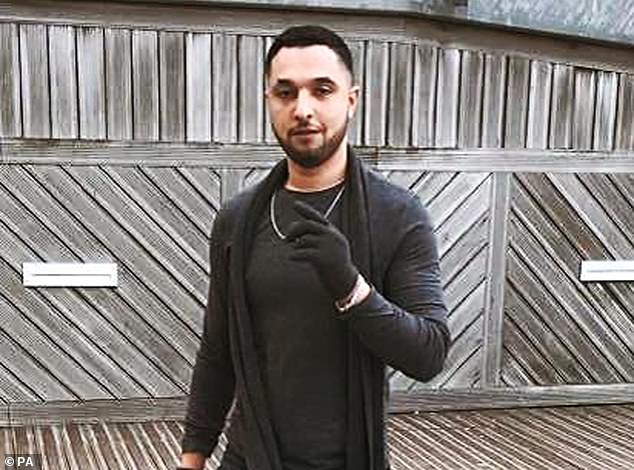 MacLeod was convicted of murdering Mr Deghayes (pictured) after a retrial at Southwark Crown Court, after he had first claimed he acted in self-defence

A caption on the image read: ‘I got hitters that would kill ur mum rude boi..’

The defence barrister said Mr Deghayes had been involved in violence and was being investigated by police for drug dealing.

Officers had raided an address and found baseball bats and a debt book, the court heard.

Mr Evans said the victim’s brothers had died as Islamic fighters and the social media image conjured up the ‘barbaric context about what has been happening thousands of miles away in Syria.’

MacLeod’s friend, 56-year-old Stephen Burns, was cleared of assisting an offender by helping Macleod flee the scene and hide evidence. 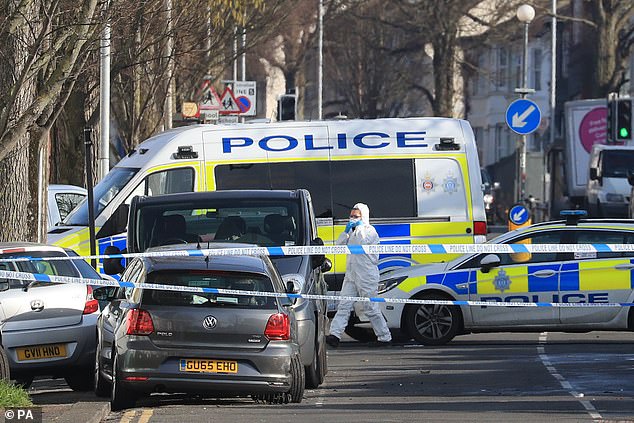 Bleeding to death from an arterial wound, Mr Deghayes drove around the corner to Elm Grove where he lost consciousness and crashed into a parked car

Mr Justice Hilliard said: ‘Mr Deghayes was 22 years old when he was murdered. I have read statement from his mother in which she speaks of the pain which has been caused by the loss of her son.

‘I have seen a document written by Mr Deghayes father and he has read it out in court.

‘He has attended the trial every day. His grief is very deep, like Mr Deghayes’ mother.

‘I hope they understand that the sentence I will pass for the offence of murder is not intended as a measure of their son’s life.’

The judge acknowledged that police believed Mr Deghayes to be a drug dealer known for assaulting other dealers.

‘Whatever the extent of the bad things he did, as a society we put a high value on human life. Nothing he did or may have done changes that,’ he added. 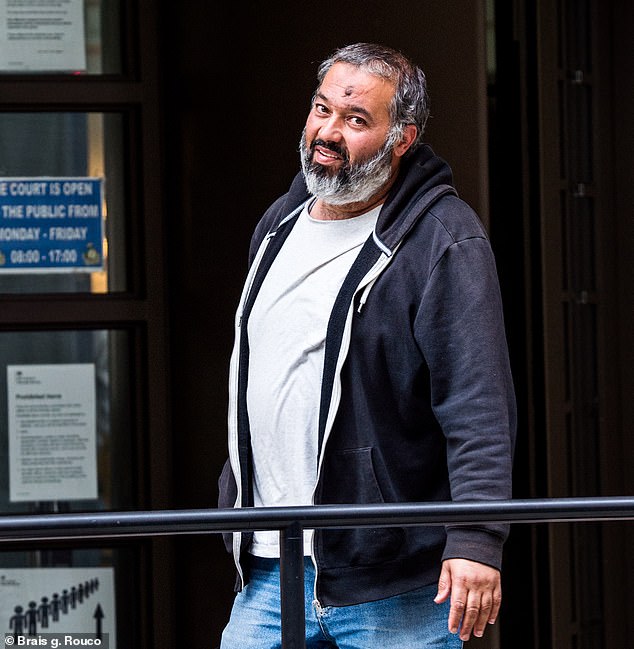 After reading his victim impact statement to the court, Abdul’s father Abubaker Deghayes turned to MacLeod, who told him: ‘I am sorry’

Dressed in a navy suit, MacLeod’s expression did not change as he was taken down to the cells.

‘The selfish soul of another led to the murder of his brother. He murdered him, and he became himself one of the lost ones.

‘It is another very very very sad day, with the loss of Abdul and Daniel MacLeod became a total loser.

‘Drugs and drug money are contaminated with invisible blood.

‘Drug dealers, poison pushers and the ones seeking visible blood to fulfil their addiction for destruction of others.’

‘Today I am wearing purple, not to be gloating. 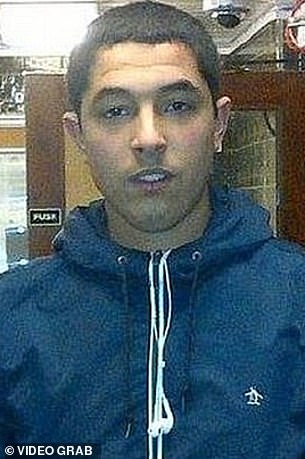 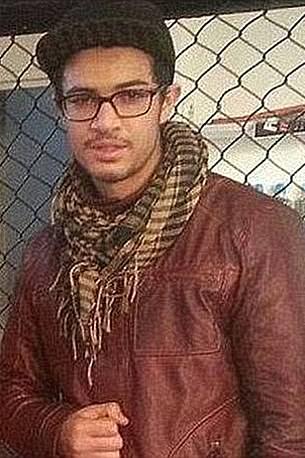 Abdul’s twin Abdullah, 18 (left) was killed fighting in Syria in 2014, just a few months after he and his brother Jaffar, 17 (right) arrived to fight for ISIS. He then died six months later

‘It is not a day to be wearing colourful things but Abdul’s favourite colour was purple since a very young age, since he was a baby he thought the purple colour belonged to him.

‘When he saw the purple colour he would run to his mum and say ‘mummy, it’s mine’.

‘Abdul was a baby in all senses and manner of the word. I am not saying that when he grew up he didn’t go astray.

‘A baby who could not hide his feelings, him out of all my sons, he couldn’t hide his jealousy and anger,’ he continued.

Turning to MacLeod, Mr Deghayes said: ‘You have looked me in eyes many times and you said many things and I remember you said you are sorry.

‘I want to take this at face value. I accept your sorrow but on this conditions. Indeed, good deeds do away with misdeeds.’

MacLeod told him: ‘I am sorry.’

The retired imam replied: ‘I stretch my hand and if the law allows my suggestion is that we form a trust in the name of Abdul and yourself and whoever is involved it this case to help drug addicts who were created partly by the drugs trade which you were involved and Abdul was involved in.

‘I am not saying Abdul was an angel.’

Adam Feest QC, prosecuting, said: ‘Adbdul Deghayes was stabbed eight times in total, stabbed through the hand, stabbed in the back which entered his kidney twice, to the upper part of the left leg and further stab wounds to the rear buttocks.

‘The stab to the left leg was inflicted to car the two main blood vessels which go in the leg and out again.

‘That lead to significant and immediate bleeding that very quickly lead to unconsciousness and very shortly to death.

‘Frank in fact is Mr MacLeod, you will hear that Mr MacLeod was involved in a drug dealing enterprise and that enterprise gave him the name Frank.

‘It’s because of drug dealing that Mr Deghayes appears to have been in that location on that evening he had telephoned Frank to bring some drugs and Frank came to the scene with another male.

‘Frank got out and went to the driveway to meet him, the other man remained in the car.

‘There is no dispute that it was Frank who inflicted some of the stab wounds and killed Mr Deghayes.’

Mr Deghayes’ blood was found in a Citroen belonging to Burns.

MacCleod remained in Brighton for another half an hour, travelling to his drug dealing address to change his clothes before returning home to Brighton in a different car.

‘That this was a drugs matter is clear, the exact reason may never be known,’ said Mr Feest.

‘Some clue is given by a telephone call an hour or so later by Stephen Burns to Colby Broderick In which he told him that Abdul Deghayes had recently robbed Mr MacLeod of drugs.

‘Mr MacLeod will be saying to you that he was acting in self defence. That he was just there to deal drugs and that Mr Deghayes came with a knife.

‘He manages to disarm him with it and manages to grab it and stab Mr Deghayes in lawful self-defence, leaving before knowing it was fatal.’

Both MacLeod and Burns have admitted possession with intent to supply cocaine, mdma and cannabis.

MacLeod was given life with a minimum sentence of 19 years.

Burns was given 34 months each for the cocaine and mdma, and 16months for the cannabis, all the be served concurently

Burns, of Lennox Street, Brighton, denied, and was cleared of, assisting an offender.

He was jailed 41 months and the judge also activated nine months of an 18 month suspended sentence for dealing cannabis that he was in breach of, bringing his sentence to 50 months.

The judge also ordered the forfeiture and destruction of the drugs seized, which had a street value of £104,000.

The prosecution will be initialising confiscation proceedings at a later date.

11/27/2020
We and our partners use cookies on this site to improve our service, perform analytics, personalize advertising, measure advertising performance, and remember website preferences.Ok