Trump will ‘meet with law enforcement and survey damage from recent riots’ in Kenosha, Wisconsin, the White House says. 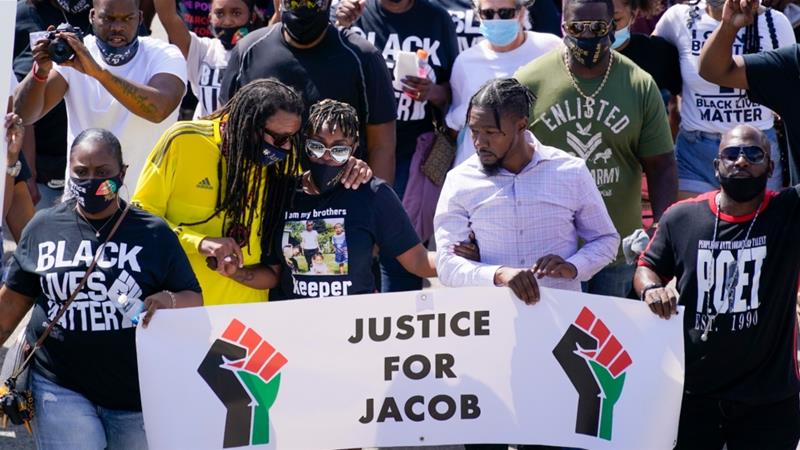 Wisconsin’s Lieutenant Governor Mandela Barnes has said his state, the site of recent protests following the police shooting of Black man, does not need a visit from President Donald Trump following his “incendiary remarks” on the racial justice demonstrations that have swept the United States in recent months.

Trump, who has taken a hard stance against the protests, will on Tuesday visit the city of Kenosha, where further demonstrations have erupted after police shot Jacob Blake, a 29-year-old Black man, seven times in the back last Sunday.

The incident, which occurred in front of three of his children and was recorded on a mobile phone, turned the mostly white city of 100,000 people south of Milwaukee into the latest flashpoint in a summer of country-wide demonstrations against police brutality and racism.

On Tuesday, amid continuing protests in the city, two people were fatally shot by an armed civilian. Kyle Rittenhouse, a 17-year-old from Illinois who had gone to the protests armed with a semi-automatic rifle, was later arrested for the violence.

The demonstrations have also resulted in property damage, with the commander of the National Guard saying on Friday that more than 1,000 guard members had been deployed to help keep the peace in the city, and more were on the way.

The shooting of Blake has come amid a larger reckoning over racial justice in the US following the death of George Floyd in police custody in May.

“They centred an entire convention around creating more animosity and creating more division around what’s going on in Kenosha,” Barnes said on CNN, referring to the Republican National Convention, which featured a recurring law-and-order theme that framed the ongoing protests as threatening the safety of cities and suburbs across the country.

“So I don’t know how, given any of the previous statements that the president made, that he intends to come here to be helpful, and we absolutely don’t need that right now,” he added.

“His visit has one purpose and one purpose only, and that is to agitate things,” the Democrat told CNN’s State of the Union programme. “We’re 66 days from an election and I think it’s a tragedy that we have a president that is doing everything he can to fan the flames.”

The White House said on Saturday that Trump would travel to the city to “meet with law enforcement and survey damage from recent riots”, but did not say whether the president planned to meet with Blake’s family.

Wisconsin Attorney General Josh Kaul said this week that police confronted Blake when they were called to the home of a woman who had reported her “boyfriend was present” without permission. Officers then tried to arrest him.

Kaul said efforts to subdue Blake with a Taser failed, and that investigators later recovered a knife from the floor of the car that Blake was leaning into when he was shot.

On Friday, the Kenosha police union defended the officers’ actions, saying Blake was armed with a knife, fought the officers and was given several chances to cooperate before they used deadly force.

Blake’s lead lawyer, Ben Crump, has said his client was not armed with a knife and did not provoke or threaten police. The witness who took the cell phone footage also said Blake did not appear to be holding a knife.

Lieutenant Governor Barnes, on Sunday, also called on Democratic presidential candidate Joe Biden to “step up to the mantle” and lay out a clear plan to address racial inequalities.