Home » World News » Is a prefab green house more than a pipedream in Australia?

Is a prefab green house more than a pipedream in Australia?

Many Australians are struggling to buy a new home, let alone one designed by a multi award-winning architect like Sydney’s Peter Stutchbury.

That could change if entrepreneur Oscar Martin can shake up the market for prefabricated green housing in the same way his former media company Pedestrian.TV stole the market for Millennials. 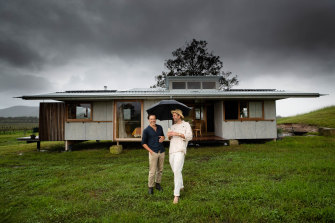 Alejo de Achaval and Krinklewood Winery owner, Oscar Martin, with the prefab kit home that is nominated for awards for design and sustainability, in the Hunter Valley, NSW.Credit:Janie Barrett

For the past two years, Martin has been working with Stutchbury and project manager Alejo De Achaval to build an affordable, prefabricated, carbon-neutral and concrete-free home with the aesthetics and flexibility of an architect-designed house.

The first home, a 90-square metre prototype called OM-1 by Martin and Stutchbury’s start-up Dimensions X, has been shortlisted for the NSW’s Australian Institute of Architects 2022 awards for sustainability and new houses.

Martin adds: “We’re on a journey to create the world’s most planet-friendly sustainable architectural house.” 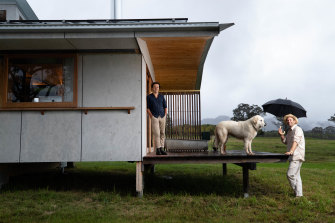 The approach is similar to Martin’s at Pedestrian. Instead of expecting the young audience to adapt to traditional media’s style, Pedestrian.TV changed what it did – writing in the voice of its audience about topics they said they wanted to read about.

Rather than expecting buyers to adapt to a set design, Martin, Stutchbury and De Achaval have developed a prefabricated house with skylights that, like the house, can be rotated 360 degrees to suit a site. Windows and doors can be switched around. Walls can be removed because of a portal frame which means they aren’t load bearing.

Extra bays for desks, bedrooms, seating and storage pop out and add on.

Eaves are used for storage. The use of a new type of footing, a concrete-free foundation called Surefoot Footing, means the house can be located on any site – no matter how rocky, wet or hilly – with only minimal changes to its cost and little disruption to the land.

With walls made of cross laminated timber, the entire house arrives in a flat pack on a single truck, ready to be erected like a sturdy pack of cards in a few weeks, depending on size.

Many apartments and most prefabricated homes lacked the flexibility to respond to the buyer’s needs, the slope of the land and the orientation of the block, said De Achaval who has been working full time on the project for two years.

But the spaces in the new prototypes can work just as easily as a bedroom, a dance studio or a nursery, said De Achaval.

He hoped it would make home ownership more affordable.

“As a young person, buying a house is getting more unreachable,” said De Achaval, who is about to become a father for the first time. “Yet it feels like the only thing I can afford if I buy land is a prefab. Most seem like a temporary solution, and not a home.”

Designing a prefabricated and/or affordable home is the stuff of most architects’ dreams. Frank Lloyd Wright wanted to build Ursonia, an urban utopia of low-cost well-designed homes.

Architecture awards often include entries that repurpose old shipping containers or homes that arrive at the back of semi-trailer. Yet few architects have managed to find a big enough market at the right price.

When the former dean of architecture at the University of Newcastle Lindsay Johnston was studying architecture in the 1960s, everyone thought houses of the future would be made in factories, he said.

That hadn’t been realised. “The great teeming masses don’t want prefab houses, and that’s the problem.”

Only 3 per cent of Australians live in a home designed by an architect. And Johnston says there is a disconnect between what Australians want from a home – very often more traditional styles – and what they want from their cars and computers – sleek modern lines.

He said maybe the time had come for modern prefabricated houses, especially given an increased appetite for greener and more affordable housing.

In 2005, Stutchbury designed a cardboard house that was displayed outside the Opera House.

“Every architect is an idealist,” said Stutchbury, explaining the prefab dream. “You want to provide architecture to the community. I’ve always felt like that. That’s why we have always done additions.”

Stutchbury said he had often been asked to design a prefabricated prototype. When he met Martin, he felt confident that he was someone who would take on the “sustainability, the aesthetic, the rigour – and who had the energy to do that.” 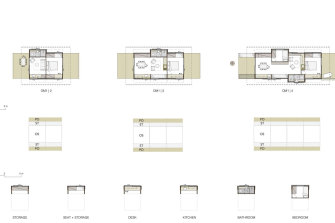 Peter Stutchbury and entrepreneur Oscar Martin have partnered to design a series of prefabricated homes called Dimensions X that can be ordered online, with pop ons and variations to suit individual owners.Credit:Dimensions X

Martin developed an interest in building after selling Pedestrian.TV to the Nine Entertainment Co. (the owner of this masthead) in 2015.

He decided to knock down the worst house in a Bondi, and build a new one while undertaking a building diploma. The expense and waste led him to research pre-fabricated houses.

He discovered beautiful models in Scandinavia and Japan. Yet there was nothing to compare in Australia. “Everything I looked at was literally a rectangle on a concrete box. Massively destructive to the environment, nothing was flexible, and it didn’t reflect the site,” he said.

At the other end of the market were spectacular architect-designed homes that most people couldn’t afford.

“ [I thought] wouldn’t it be wonderful to live in a Peter Stutchbury, an architect-designed house that has 40 years of incredible thinking and experience?” said Martin.

Martin plans to use his vineyard Krinklewood Estate at Broke to build 17 different versions of Dimensions X, including a mobile studio on a standard box trailer. It converts to sleep two people.

The Dimensions X is designed to be ordered online. The final pricing has yet to be determined.

The author is a lay juror on the panel deciding the Australian Institute of Architects’ NSW Award for new housing. Winners will be announced in July.

A guide to the environment, what’s happening to it, what’s being done about it and what it means for the future. Sign up to our fortnightly Clear Air newsletter here.