Irish PM Micheal Martin warned of the need for ‘urgent’ progress in Brexit trade talks today as pressure mounts on Michel Barnier to climb down on key demands.

Mr Martin, who recently took over from Leo Varadkar, said there had been ‘some progress’ but called for an ‘injection of momentum’.

In an apparently message to Mr Barnier as well as Boris Johnson, he insisted it was in ‘everybody’s interests’ to get a ‘good, comprehensive trade deal’.

The intervention, in an interview with the BBC’s Andrew Marr show, came after another week of talks failed to secure a major breakthrough.

It had been hoped that the face-to-face meetings with Mr Barnier and the UK’s negotiator David Frost – agreed following a high-level conference call last month between Boris Johnson and European Commission president Ursula von der Leyen – would end the deadlock.

But despite rumours of a shift on the EU’s demand for full access to British fishing waters, neither that sticking point nor the issue of obeying Brussels rules has been resolved. 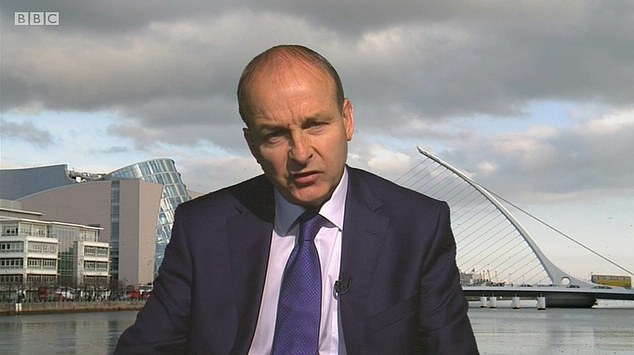 Micheal Martin, who recently took over from Leo Varadkar as Irish PM, told the BBC’s Andrew Marr show there had been ‘some progress’ in trade talks between the EU and UK but called for an ‘injection of momentum’ 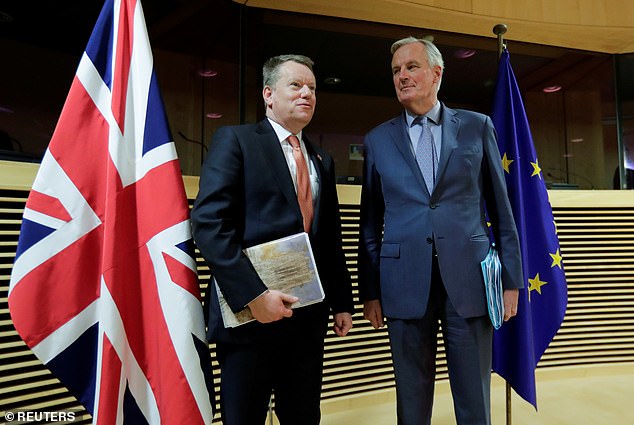 David Frost welcomed the EU’s chief Brexit negotiator Michel Barnier to Downing Street for a private Brexit dinner last week. The pair are pictured together in Brussels on March 2

The UK Government has insisted that once Britain formally splits from Brussels at the end of the transition period this year then it will become a fully independent coastal state.

That means it will have the power to grant and restrict access to its waters.

Downing Street has repeatedly said that British fishing boats will be given priority treatment over their EU counterparts.

But the EU has been adamant that for an overall Brexit trade deal to be agreed then the existing arrangements on fishing will need to continue.

In broad terms that would mean the UK effectively remaining subject to the main parts of the Common Fisheries Policy and would see EU fishing boats keep their current level of access to British waters.

The EU wants something like the status quo to continue while the UK wants to take a completely new approach – hence the struggle to reach an agreement.

Mr Johnson is adamant he will not allow the discussions to drag on into the autumn, arguing that British businesses and citizens need certainty on the way forward before then.

If the two sides are unable to reach a deal by the end of the current Brexit transition period at the end of the year, it will mean Britain leaving the single market and the customs union without any agreement on future access.

Mr Martin said today: ‘I think we need an injection of momentum into the overall talks between the EU and the UK in relation to Brexit.

‘I do believe I had a very fruitful discussion with the prime minister, Boris Johnson, after I took up office.

‘I think we both agreed that it’s in everybody’s interest, particularly in terms of businesses and giving them certainty and securing employment into the future that we get a good, comprehensive trade deal between the UK and the European Union that can be tariff-free, quota-free, and that will facilitate smooth future relationships and good access to the single market in return for a level playing pitch all around.’

He added: ‘I think that’s in all of our interest, that we get this done. Our concern is time is tight in relation to all of the mechanisms that have to be gone through in terms of getting the sanction and the approval of the EU members states, the EU parliament and our respective governments. So we are getting into, in my opinion, an urgent time frame now.’

Mr Martin said there were ‘a number of sticking points’ but ‘where there’s a will there’s a way’.

Brussels has said throughout the Brexit talks that current fishing arrangements, underpinned by the Common Fisheries Policy, must continue, with EU fishermen allowed to access UK waters in the same way they do now.

However, the UK Government is insistent British fishing boats will be given priority as it pushes for a new scientific approach based on how many fish are in domestic waters.

Mr Barnier hinted to the Lords Select Committee on the EU on June 23 that he might be willing to compromise.

According to transcript of the meeting published last week, Mr Barnier told peers: ‘I recall that, for the European Union, things are simple and clear. 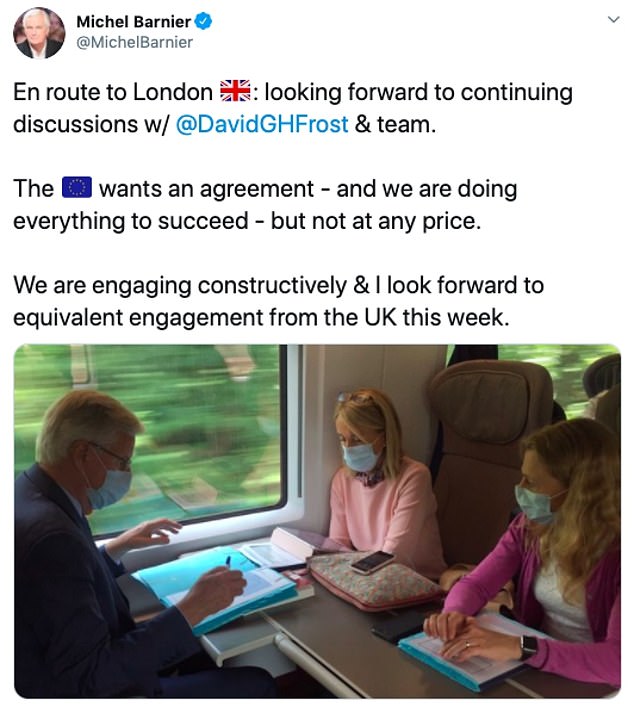 ‘The fisheries agreement that we want with the United Kingdom would be an indissociable part of the economic agreement on trade and the level playing field—or, to make it even more clear, there will be no trade agreement with the UK if there is no balanced agreement on fisheries.

He added: ‘If we both dig our heels in on those positions, there will be no discussion or agreement on fisheries and therefore no agreement on trade. That is not what we want.’

The other stumbling block is the ‘level playing field’ – conditions Brussels demands to ensure fair competition by keeping the UK closely tied to EU standards on workers’ rights, the environment and state subsidies.

The Taoiseach is due to visit Northern Ireland for his first time as Irish premier later this week.

The pair have not appeared together since the row over Ms O’Neill’s attendance among huge crowds at the funeral of veteran republican Bobby Storey in west Belfast on June 30.

Police are probing that event for potential breaches of coronavirus regulations.

Mrs Foster said: ‘We will welcome him to Northern Ireland to have discussions, respecting jurisdictions, making sure that we look forward to the future in a way that doesn’t do any damage to the relationships which have come under pressure in over the last couple of years.’

She reiterated her belief that the message on social distancing has been damaged by Ms O’Neill’s actions, but added: ‘It is now up to us all to try and rebuild that credibility … it’s important we don’t get distracted by looking at who is standing beside who but actually do the job of work of government, providing leadership.’