Iran said Sunday its arch-foe the United States is facing ‘maximum isolation’ after major powers dismissed a unilateral US declaration that UN sanctions on Tehran were back in force.

The Trump administration said the sanctions had been re-activated under the ‘snapback’ mechanism in a landmark 2015 nuclear treaty – despite Washington having withdrawn from the deal.

As other signatories cast doubt on the move having any legal effect, Washington threatened to ‘impose consequences’ on states failing to comply.

But Iran’s President Hassan Rouhani said a concerted campaign by Washington to pressure Tehran had backfired.

‘We can say that America’s ‘maximum pressure’ against Iran, in its political and legal aspect, has turned into America’s maximum isolation,’ he said in a televised cabinet meeting. 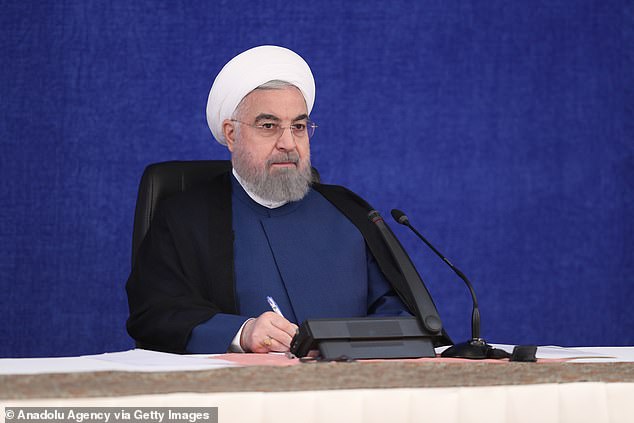 Iran said Sunday its arch-foe the United States is facing ‘maximum isolation’ after major powers dismissed a unilateral US declaration that UN sanctions on Tehran were back in force. Iran’s President Hassan Rouhani (pictured) said Washington’s efforts had backfired 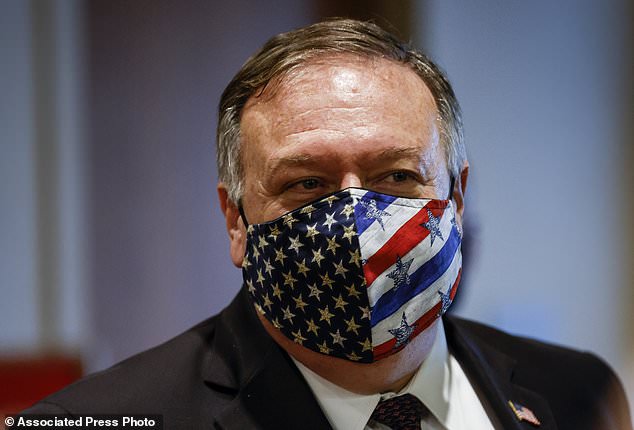 US Secretary of State Mike Pompeo (pictured), announcing the move, said Washington ‘welcomes the return of virtually all previously terminated UN sanctions on the Islamic Republic of Iran’

He also praised the UN Security Council’s approach to the issue as ‘very valuable’ as it ignored ‘America’s request (and) held no session to consider their request.’

The Security Council was what ‘the Americans always thought of as their point of strength,’ he said.

The sanctions in question had been lifted when Iran, the five permanent members of the UN Security Council (Britain, China, France, Russia and the US) and Germany signed the 2015 treaty on Iran’s nuclear program, known as the Joint Comprehensive Plan of Action.

But President Donald Trump withdrew from the JCPOA in 2018, saying the deal – negotiated by his predecessor Barack Obama – was insufficient.

He also renewed and even strengthened Washington’s own sanctions as part of a ‘maximum pressure’ campaign against the Islamic republic.

The US insists it is still a participant in the agreement that it stormed out of – but only so it can activate the snapback option, which it announced on August 20.

Virtually every other Security Council member disputes Washington’s ability to execute this legal pirouette, and the UN body has not taken the measure any further.

On Sunday, France, Germany and Britain issued a joint statement saying Washington’s ‘purported notification’ was ‘incapable of having any legal effect’. 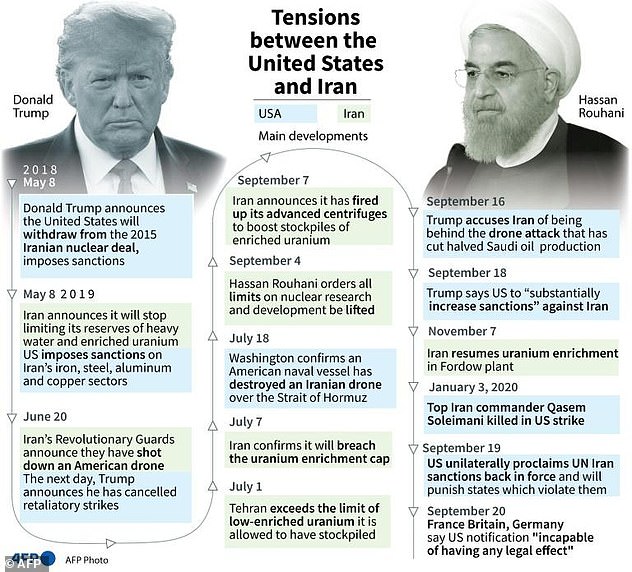 The sanctions in question had been lifted when Iran, the five permanent members of the UN Security Council (Britain, China, France, Russia and the US) and Germany signed the 2015 treaty on Iran’s nuclear program, known as the Joint Comprehensive Plan of Action

Russia also said the US lacked legal authority and that its ‘illegitimate initiative and actions’ could not have ‘international legal consequences’ for others.

Rouhani thanked UNSC members who had ‘stood against America’s illegal request’ and said that if remaining signatories let Iran access the deal’s economic benefits, Iran would reinstate nuclear commitments it had dropped in response to the US withdrawal.

Iran’s foreign ministry brushed off the move and called on the rest of the world to unite against ‘reckless actions’ of the US.

‘I imagine these are the most bitter days and hours for’ the United States, said spokesman Saeed Khatibzadeh.

US Secretary of State Mike Pompeo, announcing the move, said Washington ‘welcomes the return of virtually all previously terminated UN sanctions on the Islamic Republic of Iran’.

He said further measures would be announced in the coming days against sanctions ‘violators’, to ensure that ‘Iran does not reap the benefits of UN-prohibited activity’.

With around six weeks to go until the US presidential election, Trump could unveil those measures in a speech at the UN General Assembly on Tuesday.

But Iran’s foreign ministry said that Washington, by leaving the nuclear deal, had ‘explicitly denied itself of any right’ to use the ‘snapback’ mechanism. 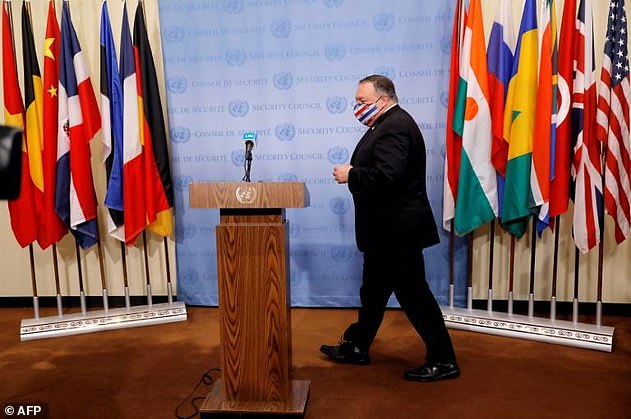 US Secretary of State Mike Pompeo on August 20 2020, after demanding that UN sanctions on Iran be resumed

It also warned that ‘if the United States acts on these threats, directly, or with the cooperation of a handful of its puppets, it will face a serious response and be responsible for all the dangerous consequences.’

The US had already suffered a resounding defeat at the Security Council in mid-August, when it tried to extend an embargo on conventional weapons deliveries to Tehran, which was due to expire in October.

Pompeo responded with an unusually vehement attack on Britain, France and Germany, accusing them of ‘siding with Iran’s ayatollahs’, before announcing the snapback.

In Washington’s eyes, its move has now extended the embargo ‘indefinitely’ and reactivated international sanctions on many activities related to Tehran’s nuclear and ballistic missile programs.

‘He’s now probably waiting for the movie to come out so he can begin to understand it,’ he told state television.

On the streets of Tehran, Iranians complained of harsh economic conditions they blamed on US sanctions.

‘It’s really difficult for the people right now. Whether sanctions are reimposed or not, we are living with utmost difficulty,’ said Leila Zanganeh, a martial arts instructor.

But Danial Namei, an architect, seemed to care little for returning UN sanctions and doubted things could get worse.

‘We’ve been through difficult things and it is still ongoing. There’s nothing worse than the worst, after all,’ he said.