UK inflation hit a four-year low last month after a drops in fuel and clothing prices.

The headline annual rate was slightly offset by a rise in the costs of food and non-alcoholic drinks.

The true figure could be even lower – as the Office for National Statistics said an alternative basket of goods, removing items not available due to the coronavirus crisis, gave a reading of 0.4 per cent.

It comes as fuel prices tumbled by 16.7 per cent in May – the biggest fall on record – while energy costs dropped 7 per cent. 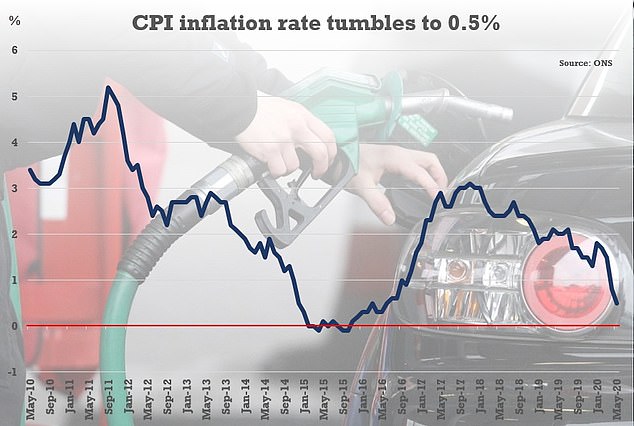 The CPI measure slumped to 0.5 per cent in May, down from 0.8 per cent and the lowest level since June 2016

Clothing and footwear price tags fell 3.1 per cent as retailers resorted to heavy discounts amid the lockdown.

‘The cost of games and toys fell back from last month’s rises while there was a continued drop in prices at the pump in May, following the huge crude price falls seen in recent months.

‘Outside these areas, we are seeing few significant changes to the prices in the shops.’

Economists said the level of inflation gives the Bank of England room to take more action to boost UK plc at its meeting tomorrow – when it is expected to launch at least another £100billion of quantitative easing (QE).

But the Bank is set to hold off from more radical action, such as negative interest rates, for now, with experts predicting it will keep interest rates unchanged at the all-time low of 0.1 per cent.

The latest inflation data showed that average petrol prices fell to 106.2p a litre last month, while diesel dropped to 113.4p a litre – levels not seen since 2016.

Fuel prices have been falling sharply as the global cost of oil has been hit hard amid the coronavirus crisis with lockdowns worldwide affecting demand, though crude prices began bouncing back last month. 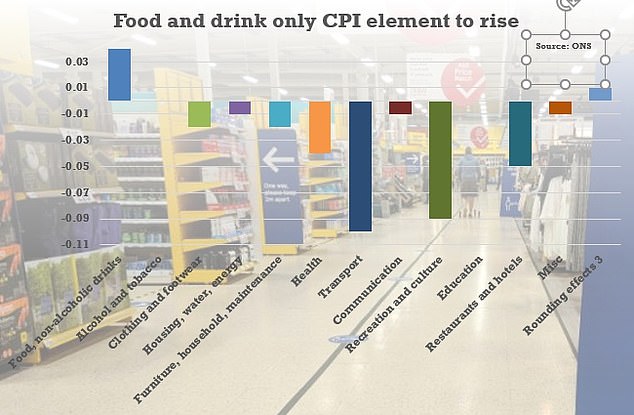 In a sign of the impact of the UK’s Covid-19 lockdown, as clothing price tags fell again sharply amid heavy discounting, food and alcohol prices also saw steep rises – up 1.8 per cent and 2.6 per cent respectively.

The data also showed that the Retail Price Index (RPI), a separate measure of inflation, was 1 per cent in May, down from 1.5 per cent in April.

The Consumer Price Index including owner-occupiers’ housing costs (CPIH) – the ONS’s preferred measure of inflation – fell to 0.7 per cent in May, down from 0.9 per cent in April.

Economist James Smith, at ING, said: ‘We expect headline UK inflation to stay below 1 per cent this year, and, given the slack in the jobs market, we’d expect price pressures to stay fairly muted for some time.

‘This, in turn, will keep the pressure on the Bank of England to maintain its current degree of stimulus, and we expect a further £150billion of QE to be unveiled this week.’