Home » World News » If this is the new normal, Britain is not ready for Australian-style summers

If this is the new normal, Britain is not ready for Australian-style summers

London: If today’s 40-degree day is a sign of what’s to come for Britain, several things are painfully clear – it is not equipped nor ready for an Australian-style climate.

Today was the first day in the six years I’ve been here where I had that feeling of living simultaneously in an oven and a tinderbox. 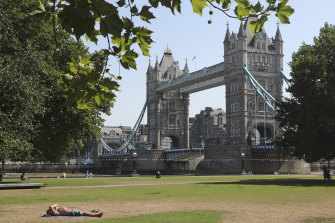 Too hot for some traditions … the shirtless sunbathers abandoned the parks.Credit:AP

That gnawing worry that this weather was so hot, the tiniest of sparks could trigger something that could be uncontrollable, and lethal.

Fires broke out. One from a compost heap. Then there was that familiar feeling of gratitude and sheer wonder at how the firefighters could be battling infernos in the unrelenting sun while the rest of us were trying to find any sort of relief in darkened flats or, if you were lucky, an air-conditioned venue.

But those are few and far between. This city is built to trap heat and air conditioning is a rarity. My apartment was built only several years ago, but it has no air con. In Australia, it probably would.

There are few escape options. There aren’t massive shopping centres where you can seek refuge. Offices might be air-conditioned but the commute to them is not. 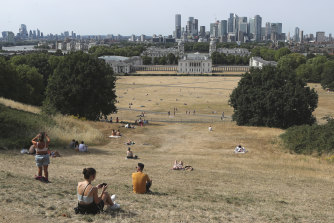 People sit on the sun-parched grass in Greenwich ParkCredit:AP

If 40 degrees in summer is not a freakish one-off but a permanent warming due to climate change this will need to change.

I doubt there was much work done in Britain today. The temperatures were so hot the goal was to move as little as possible.

My resilient cat spent all day lying in the dark under furniture. When I covered her with a wet towel she didn’t complain. Usually, that would earn me a clawing or two.

Normally, when London gets hot, the Brits go more than a little mad, stripping off clothes in public, sunbathing and drinking on the footpaths outside of pubs. I didn’t see that today.

London roasted and parts of the UK burn. It was like the 45-degree New Year’s Day I once spent in Castle Hill, in Sydney’s north-west, I’ll never forget it.

Today, sweat dripped down my face the instant I stepped onto the two, non-air conditioned buses I caught. I had waited 20 minutes hoping for an air-conditioned cab but at least two dozen went by full.

Without air-conditioned public transport London will be returned to quasi lockdown days.

At midday, popular spots like Covent Garden and Soho were virtually empty and flagship stores like Jo Malone were closed.

Mercifully, this heatwave was only two days. We spent the final hours counting down until the expected rain that would break the heatwave would come.

But what if next time is a week, a month or intermittently throughout the summer? Can we afford to disruptions the economy if they are sustained?

Retrofitting buildings, many of them hundreds of years old, will be costly and expensive, but any sensible government would urgently be talking about this as a policy option.