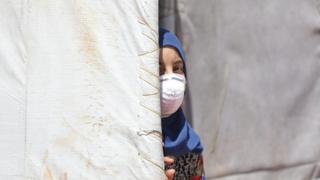 A doctor contracted the virus at a hospital in a town in Idlib near the Turkish border, aid groups said.

They said the doctor was self-isolating and his contacts were being traced.

The hospital where the doctor worked has been closed, said a World Health Organization official in Turkey.

For months aid groups have issued stark warnings about the risks of a coronavirus outbreak in north-western Syria.

Last year, the Syrian government launched an offensive to retake Idlib – the last opposition-held province in the region – from jihadist forces.

Almost one million people have fled their homes in the area since last December, with many of them now living in overcrowded refugee camps with inadequate healthcare facilities and little clean water.

There are fears the virus will spread rapidly through these vulnerable populations, overwhelming an already ravaged healthcare system.

Around six million people in total are estimated to be internally displaced within Syria, where a civil war has been raging since 2011.

A fragile ceasefire is currently place in Idlib. International charity Save the Children says that the truce needs to hold if there is any chance of containing the disease.

“Now more than ever, guns need to remain silent, the ceasefire needs to hold and all efforts have to be geared towards the aid and health response,” Sonia Khush, Save the Children’s Syria response director, said.

She said the confirmation of the first case in Idlib was “a major blow to the millions of civilians – mainly women and children – living in this area”.

Syria has officially recorded 372 cases of coronavirus, including 14 deaths, according to Johns Hopkins University in the US, which is tracking the pandemic.

But given the lack of testing, the number of infections and deaths are thought to be higher. As of 30 June, just 1,661 tests have been carried out in north-west Syria, according to Save the Children.

The charity said it understood there was only one testing facility in the region.