Soccer and circus school are banned, they can’t see their friends and they haven’t been able to go to school.

But all through the COVID-19 lockdown, siblings Kiara and Samuel Louca, age 9 and 7, have found a fantastic consolation in books. 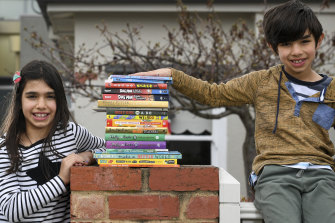 During lockdown Kiara and Samuel Louca of Coburg look forward to book deliveries by The Little Bookroom staff.Credit:Penny Stephens

With a yell and a knock on the door from the delivery man, every three weeks a few new books land on their Coburg doorstep.

Their mother, Lizzy, says it’s a treat just for the pandemic. "It adds a bit of excitement to their week and a bit of happiness," she said.

The family are among loyal customers of The Little Bookroom, in Carlton North, that since March – like other bookshops – has had to embrace online and phone orders, and find new ways to reach customers.

The Little Bookroom owner Leesa Lambert said initially she was "terrified" of losing the business, however, sales for the year to date are up 15 per cent on the same time last year. The shop’s decision to hand-deliver books to suburbs as far as Moonee Ponds and Reservoir has been a hit. 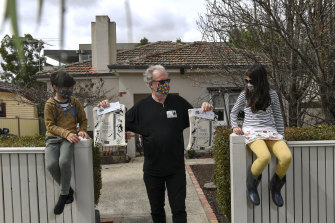 Ian Lambert from The Little Bookroom delivers books to Samuel and Kiara Louca from Coburg.Credit:Penny Stephens

Ms Lambert’s father, Ian Lambert, is among three staff who are dropping off, by car, more than 100 books per day to customers.

In the lead-up to national Love Your Bookshop Day, Australian Booksellers Association CEO Robbie Egan pointed to Nielsen BookScan figures, that show the value of print book sales in the year to August 22 were up by 2.9 per cent on last year, totalling over $681 million.

Nationally, sales of units (books) are up by 7 per cent to 37 million. (Victorian figures were not available.)

Mr Egan said: "Australian communities have been wonderful supporters of their local bookshops during the pandemic, and bookshops have responded in turn with great ingenuity."

Michelle Delle Vergin, owner of Booktique bookshop in Wangaratta in Victoria's north-east, said her shop’s monthly sales since March had been up on average more than 30 per cent compared to last year, "with April the only month when we were flat".

Being in a regional area, Booktique’s doors have stayed open during the pandemic. However, some city bookshops have been doing it tough.

Dino Traverso, co-owner of Dymocks' Collins Street store in Melbourne's CBD – which has closed for a total 12 weeks during the pandemic – said his store’s August sales were down 90 per cent compared to August 2019.

Richard Speight, co-owner of Fairfield Books, said in August, turnover was down about 20 per cent compared to the same month last year and cash reserves were low, at a time the store had to start stocking up for Christmas.

Joe Rubbo, manager of Readings bookshop in Carlton, said sales were down significantly, however, the store would survive, helped by a strong financial position pre-pandemic, customer loyalty, and more than 100 staff being on JobKeeper.

Love Your Bookshop Day will have an online focus in Victoria this year, including a live-streamed event at 11am on October 3 on the KidLit Club Facebook page, with storytelling, and chats with authors, booksellers and readers.

Visit loveyourbookshop.com.au to register or for more information.

In need of some good news?

Stories that will brighten your outlook, delivered weekly to your inbox. Sign up now for our Greater Good newsletter that is launching soon. Sign up to The Age here; Sydney Morning Herald here; Brisbane Times here and WAtoday here.