‘I was a brat’: Geri Halliwell says sorry for leaving Spice Girls

‘I was a brat’: Geri says sorry for leaving Spice Girls as Adele signs along and Mel B hints at Australia trip on emotional final night of reunion tour in front of 70,000 fans at Wembley

The Spice Girls closed a sold-out three-night run at Wembley Stadium by inviting their mothers and children on stage.

Emma Bunton, Melanie Brown, Geri Horner and Melanie Chisholm ended their long-awaited UK reunion tour with a rendition of their hits including Wannabe and Spice Up Your Life.

As the concert came to a close, they were joined by their families, with Horner remarking: ‘You saw three generations of Spice Girls.’

The tour, which began in May saw the band perform to 700,000 fans in 13 arenas making them all a considerable amount of cash 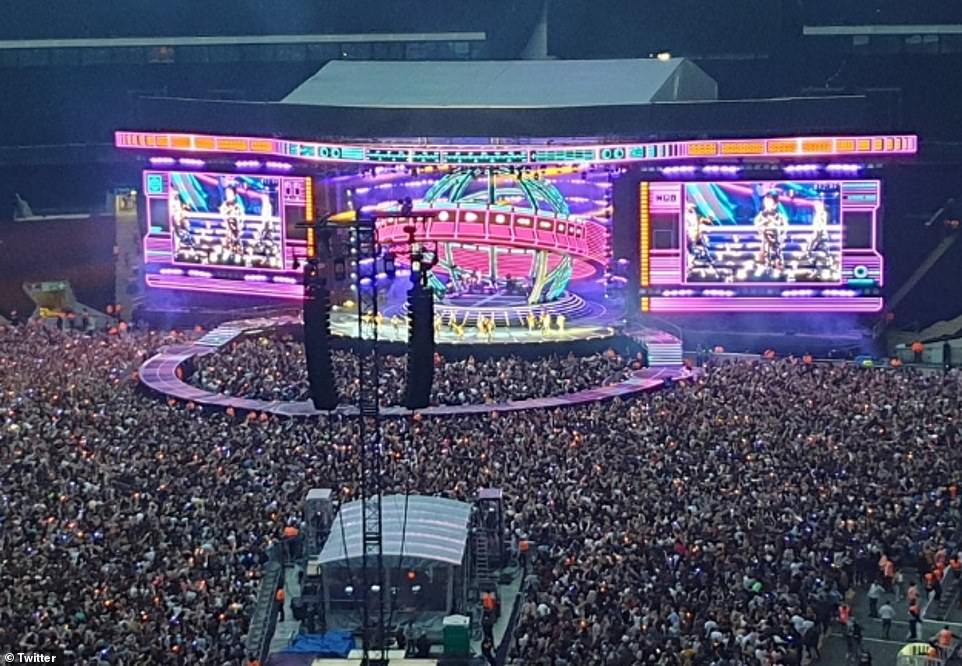 Almost 700,000 people have seen the Spice Girls reunion tour which visited 13 stadium, ending last night with the four stars inviting their mothers and children on stage at a packed Wembley Stadium 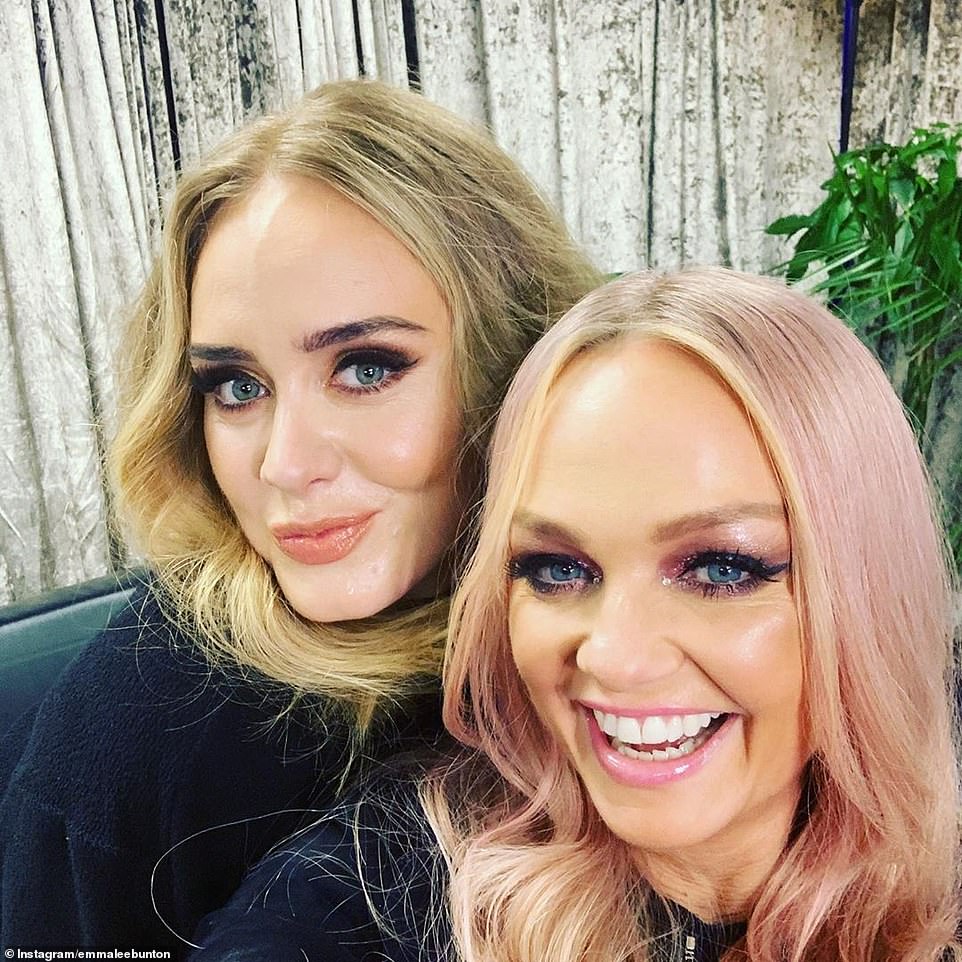 Sweet: Adele, who will no doubt be sticking around to enjoy the show, also met Emma who shared a sweet selfie of the two of them and branded the pop star ‘gorgeous’ as she paid a sweet tribute ahead of the show 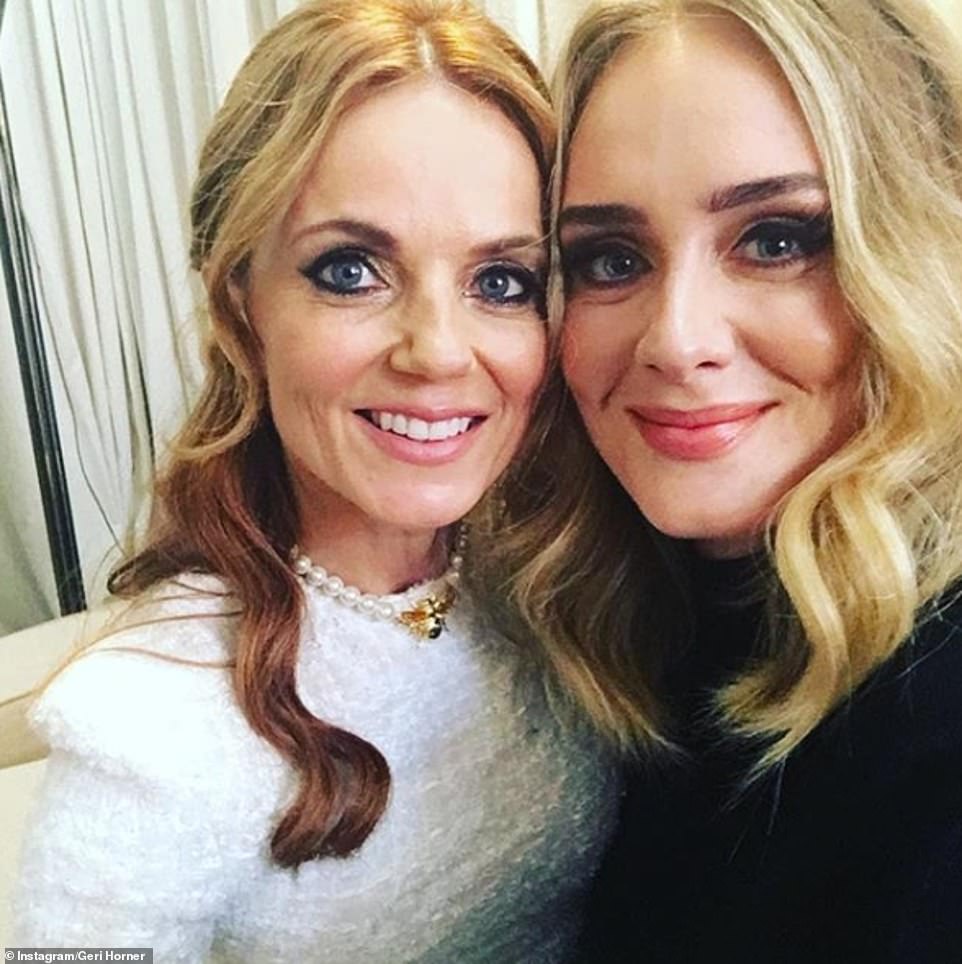 Hanging out: Ahead of their last sold-out performance Geri Horner hung out with Adele backstage, while Mel B soaked up the support act Jess Glynne among the excitable crowds at Wembley Stadium in London 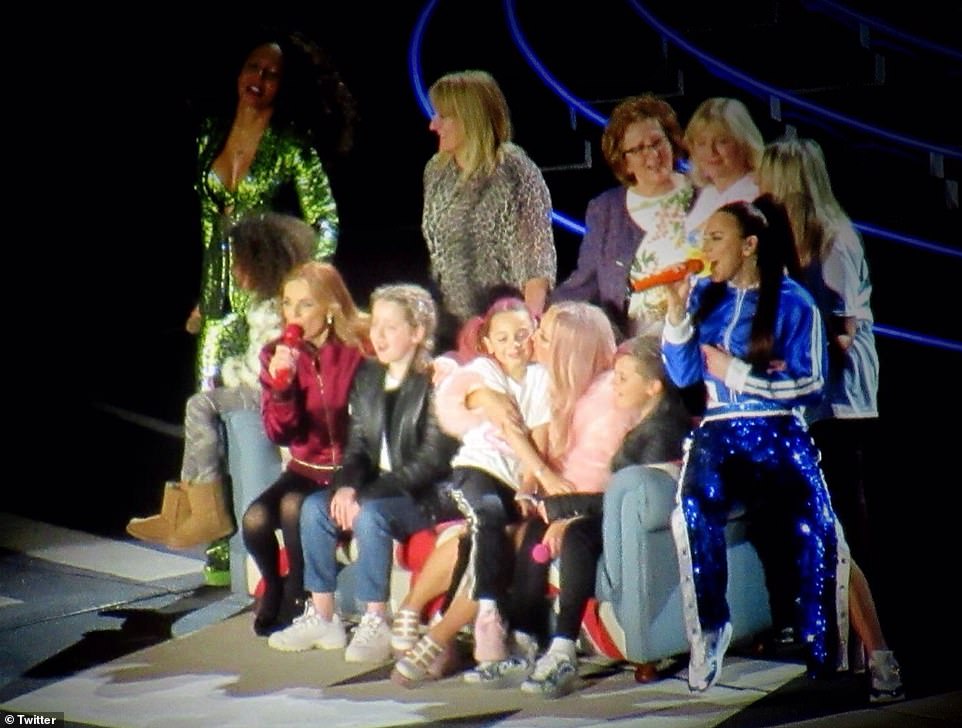 Four of the five original members of the band appeared on the tour. Victoria Beckham, known as Posh Spice did not attend the tour. Ginger Spice Geri Horner took the opportunity to apologise to fans for quitting the band in 1998, two years before the band themselves split 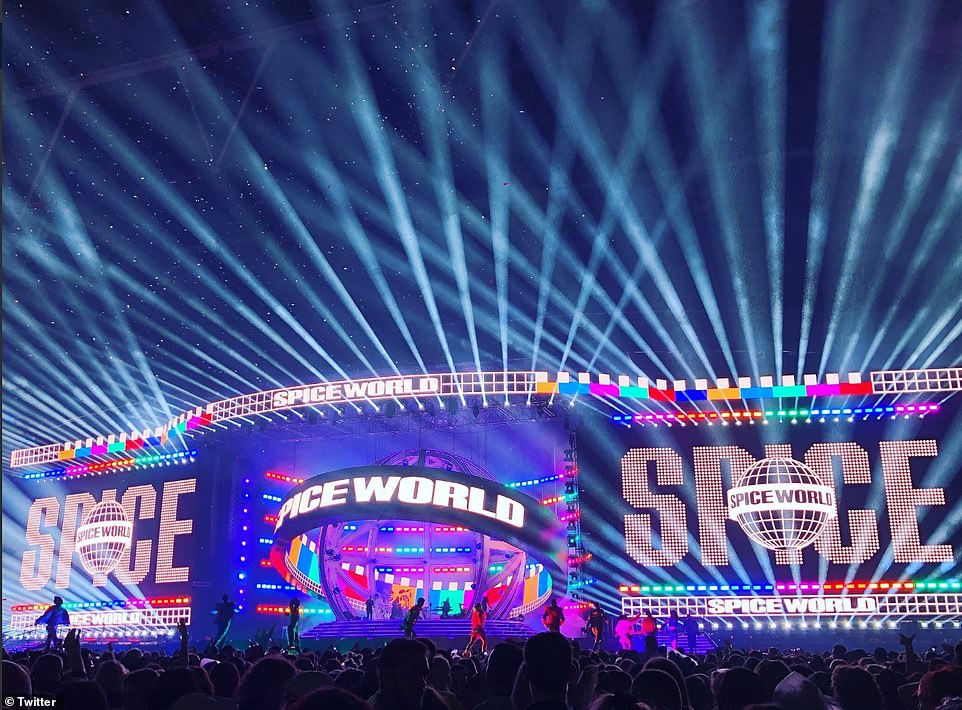 The Spice Girls embarked on their reunion tour in late May and have played in Dublin, Cardiff, Manchester, Coventry, Sunderland, Edinburgh and Bristol

Handsome couple: Victoria Beckham put an end to the rumours that she will reunite with the Spice Girls on Saturday night, as she attended footballer Sergio Ramos’ wedding to Pilar Rubio in Seville

Horner, or Ginger Spice, also apologised to her bandmates for leaving the Spice Girls in 1998, two years before the rest of the group went on hiatus.

Between songs, she said: ‘I’m sorry. I’m sorry I left. I was just being a brat. I want to say it’s just so good to be back with the girls that I love.’

They also led the crowd in an impromptu singalong of Adele’s Someone Like You after announcing that the Grammy-award winning singer was in the audience.

Before the show, Horner and Bunton shared selfies with Adele on their social media accounts.

Ginger Spice captioned the photo ‘Finally together’ while Bunton described the singer as a ‘gorgeous lady’.

Following the show, an emotional Horner posted a video in which she thanked everyone involved in the tour. 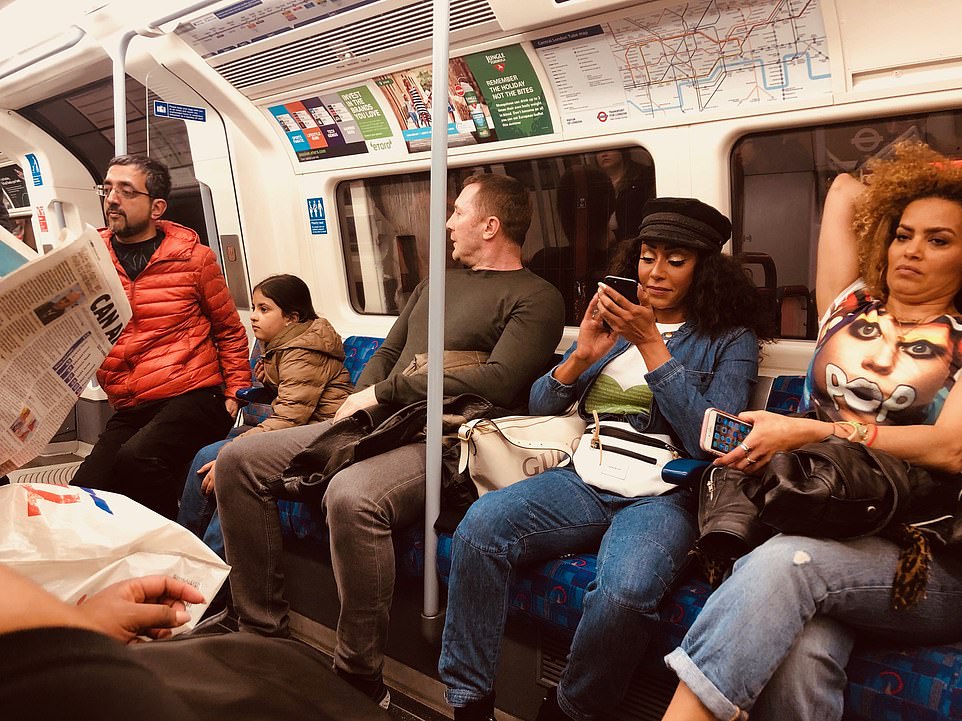 Glam: Mel appeared to be almost stage ready as she donned a full face of make-up including a glitzy eye look with sweeping eyeliner and lashings of mascara 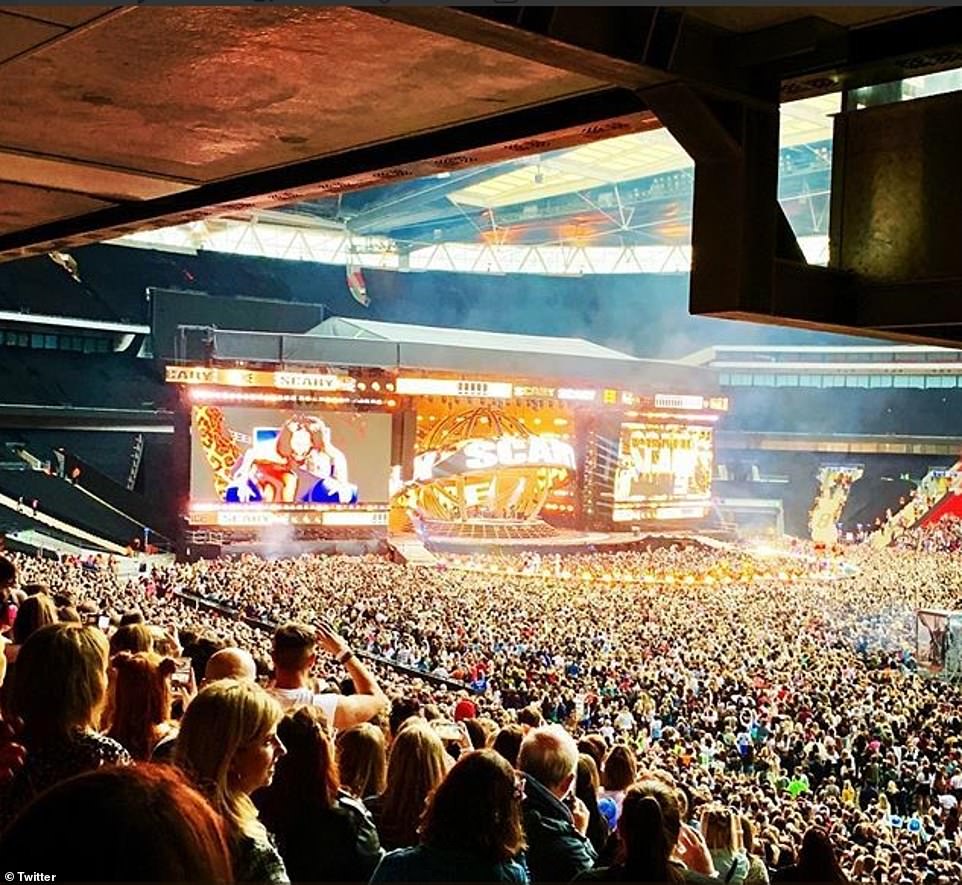 Their performance on Saturday night rounded off the tour, which has not included Victoria Beckham 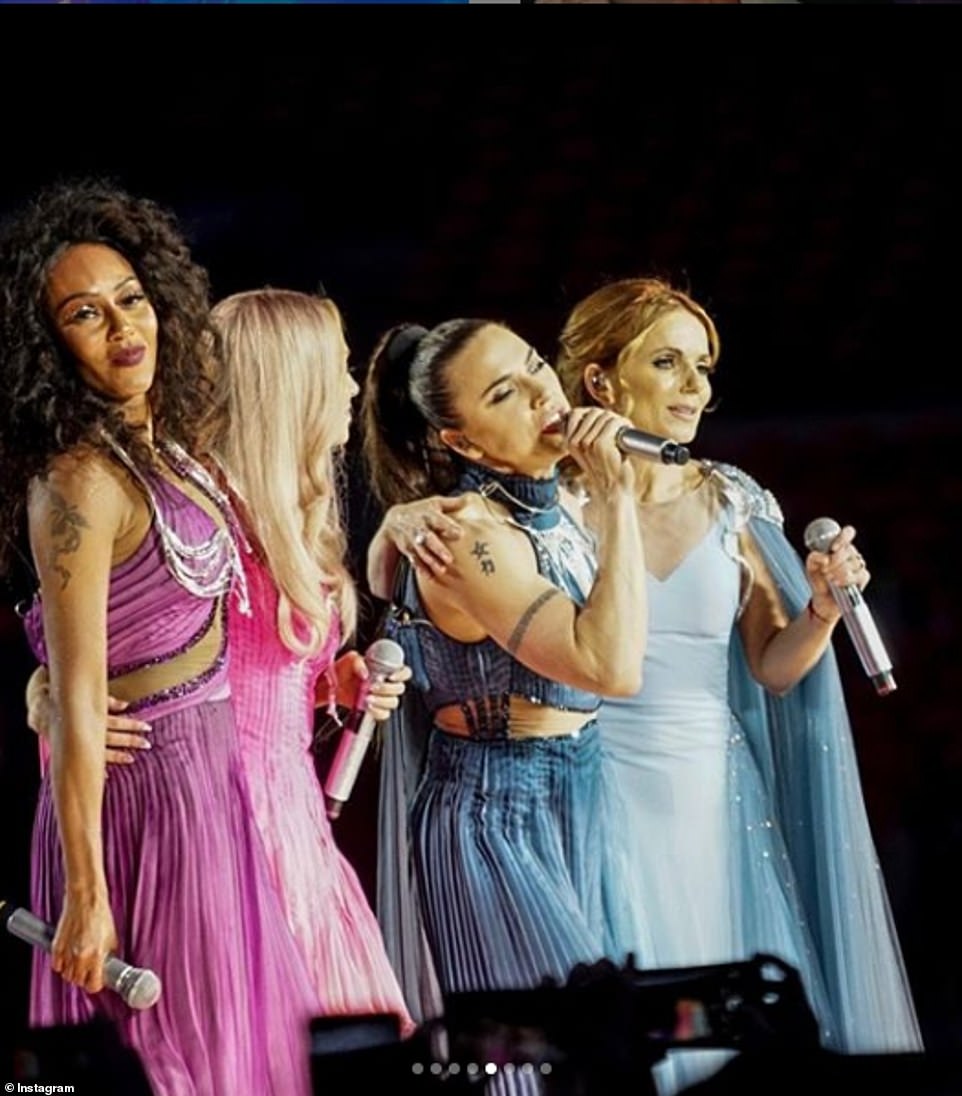 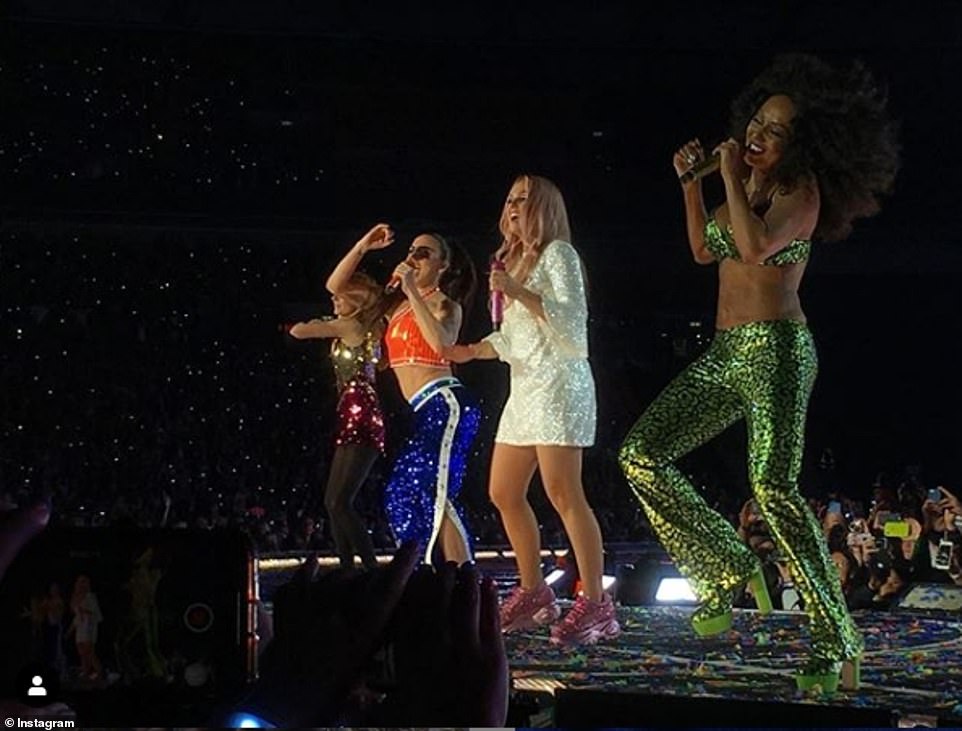 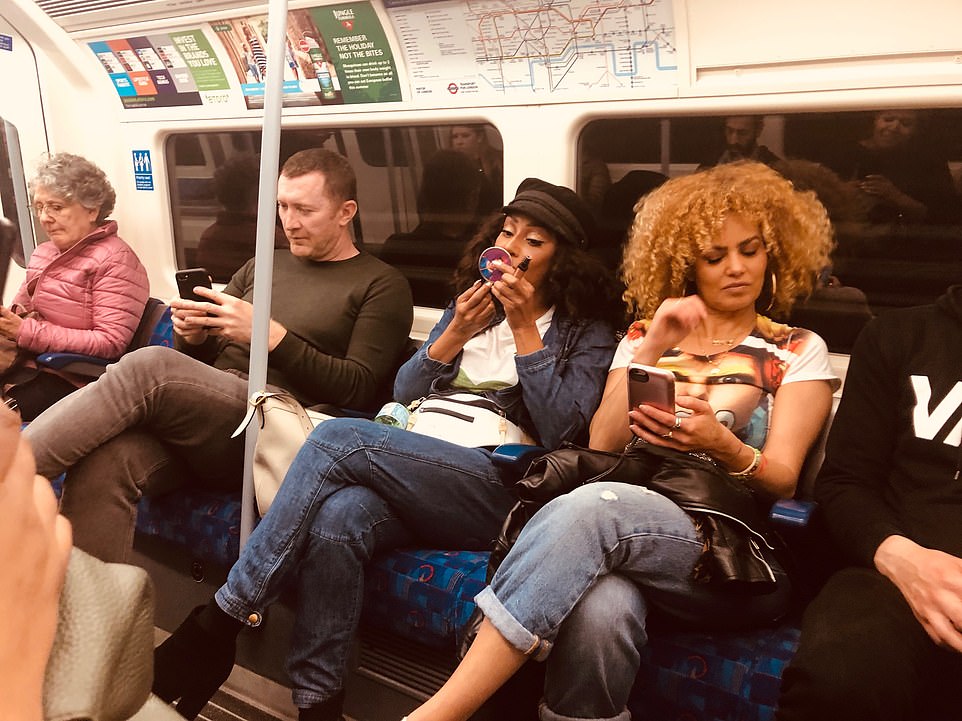 Getting ready: Mel B proved she was just like the rest of us, as she touched up her make-up on a Jubilee line tube with a compact mirror

‘I want to say thank you to Melanie, Melanie and Emma and everybody who showed up for us. It has been something that I will never ever forget. Thank you so much. Big love from the Spice World.’ 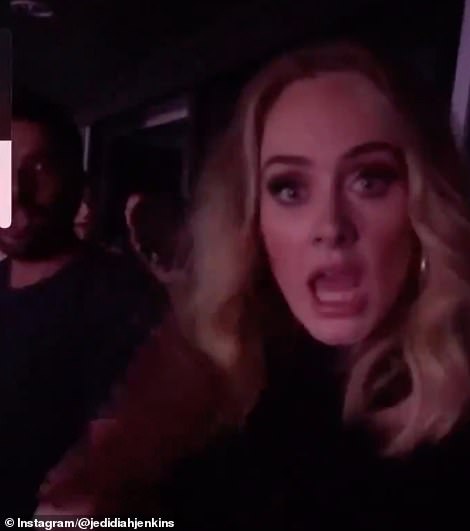 The Spice Girls embarked on their reunion tour in late May and have played in Dublin, Cardiff, Manchester, Coventry, Sunderland, Edinburgh and Bristol.

Their performance on Saturday night rounded off the tour, which has not included Victoria Beckham.

Brown, also known as Scary Spice, has described their Wembley Stadium gigs as one of the most important moments of her life.

Earlier, Chisholm, or Sporty Spice, posted a picture of the group in their early days with a message to the absent Beckham.

She said: ‘The gorgeous Victoria Beckham will always be missed (hopefully someday to return)!’

Hollywood actress Emma Stone and Holly Willoughby are among a clutch of stars to have attended the concerts.

However, the girls have hinted they will play Australia in the New Year. 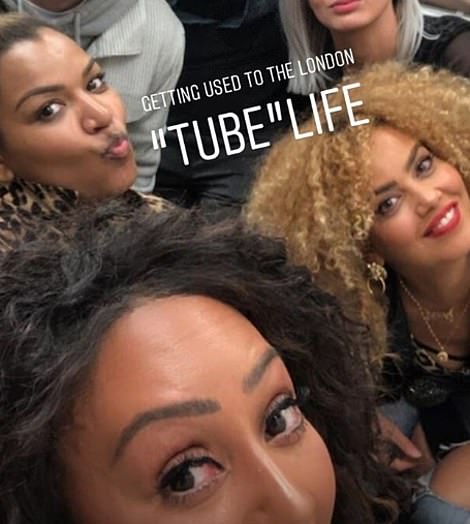 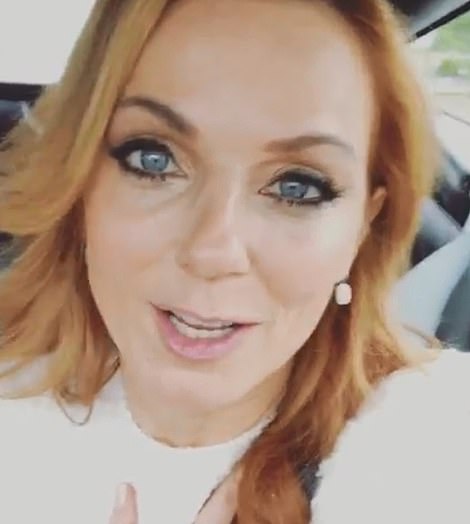 It’s the big one! Geri also shared a clip of herself riding in a car as she approached Wembley Stadium and admitted that her heart is ‘filled with love’ for the girls in the band and their fans 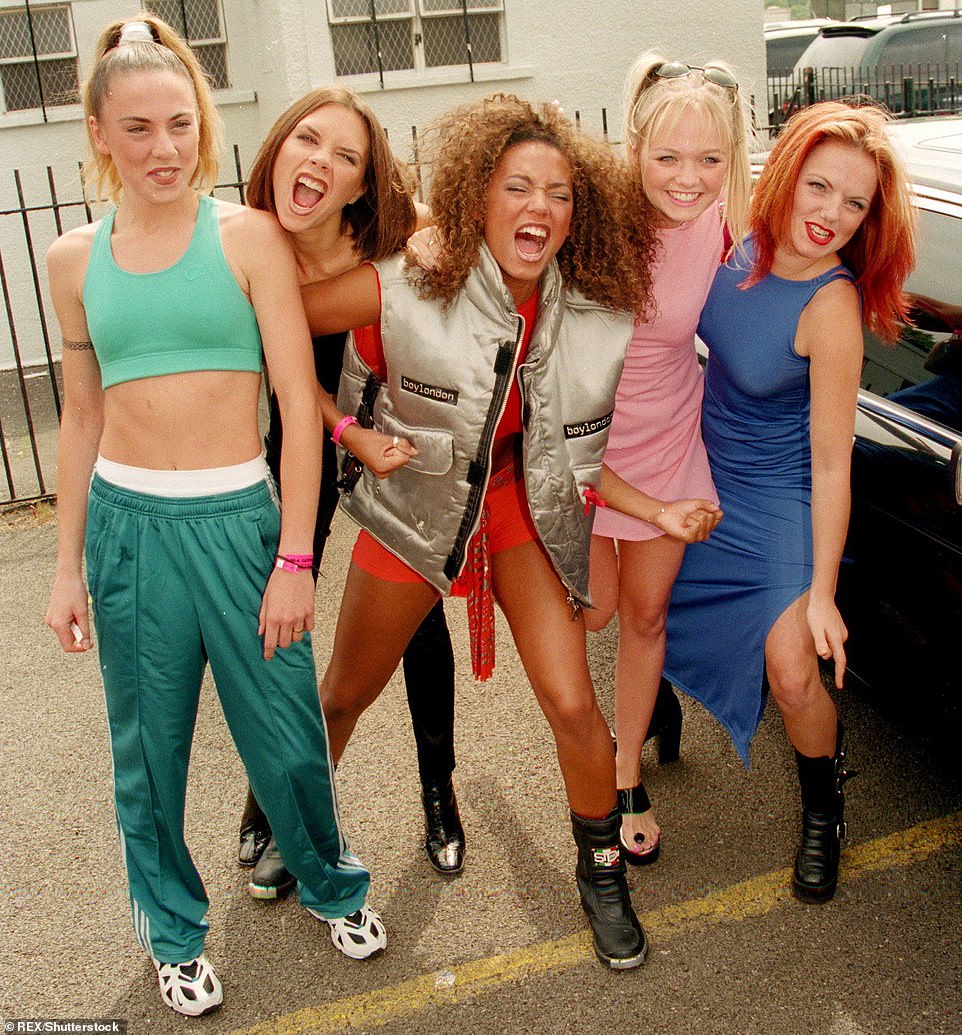 Throwback: Fans hoped they would see the group reunite like in their heyday (pictured in 1996)

A head of their last sold-out performance Geri Horner hung out with Adele backstage, while Mel B soaked up the support act Jess Glynne among the excitable crowds at Wembley Stadium in London .

Celebrities including A-list star Emma Stone have turned out in their droves to watch the girls reunite 25 years after they first joined the band, and their final show was no different.

Hanging out: Ahead of their last sold-out performance Geri Horner hung out with Adele backstage, while Mel B soaked up the support act Jess Glynne among the excitable crowds at Wembley Stadium in London

Before kicking off the last instalment of their tour, Geri posted a snap of herself spending time with singing sensational Adele and captioned the shot ‘finally together’.

Adele, who will no doubt be sticking around to enjoy the show, also met Emma who shared a sweet selfie of the two of them and branded the pop star ‘gorgeous’ as she paid a sweet tribute ahead of the show. 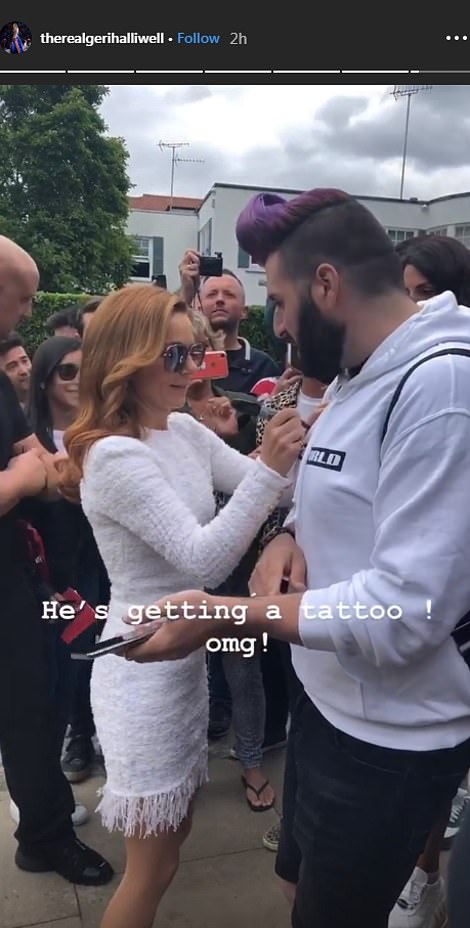 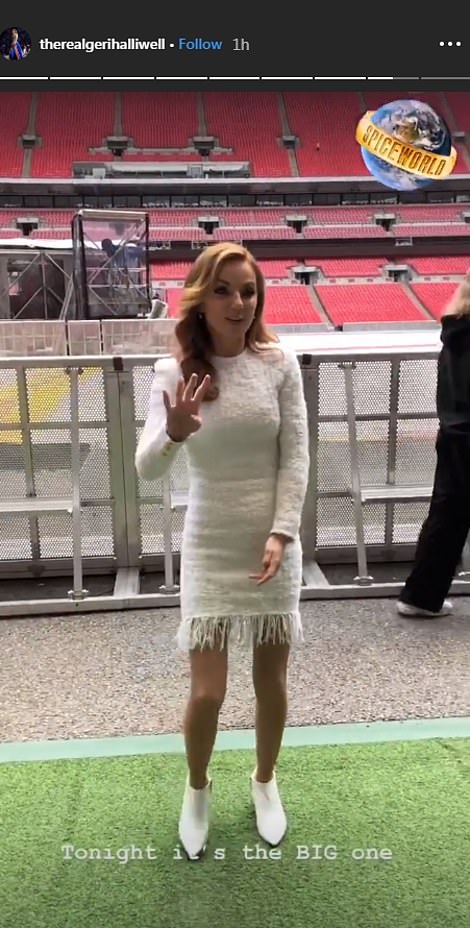 Dedicated: Earlier in the day Geri met groups of fans who had turned out in the hopes of meeting their favourite Spice Girl before the show, one fan was even so dedicated he revealed he was getting her signature tattooed on his arm

Meanwhile, Mel B immersed herself in the crowd at Wembley as she joined her team in front of the stage to watch Jess Glynne perform her warm up act ahead of the main event.

She also shared a clip of herself walking out into Wembley Stadium where she predicted: ‘There’s going to be a lot of love a lot of tears, four spice girls, 700,000 people 13 stadiums. Tonight – it’s the big one.’

All of the Spice Girls have closely documented their tour journey on their respective social media pages and kept their fans updated on what goes on behind the scenes.

Before both Friday and Saturday’s shows Mel B revealed that she had been getting the tube to Wembley in order to beat the traffic during rush hour, ensuring to share snaps of her journey on Instagram.

Posting a snap of herself with her team on the tube, Mel joked: ‘Getting used to the London ‘tube’ life’.

Spice Girls fans were holding out hope that Victoria Beckham would join the rest of the group during their last performance at Wembley Stadium after being absent for the rest of the tour due to work commitments. 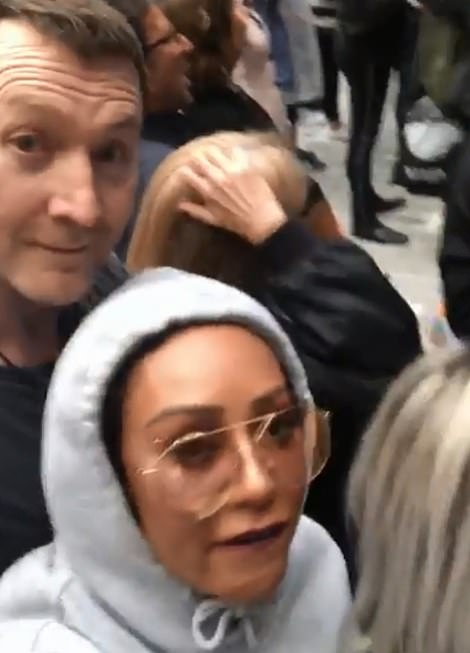 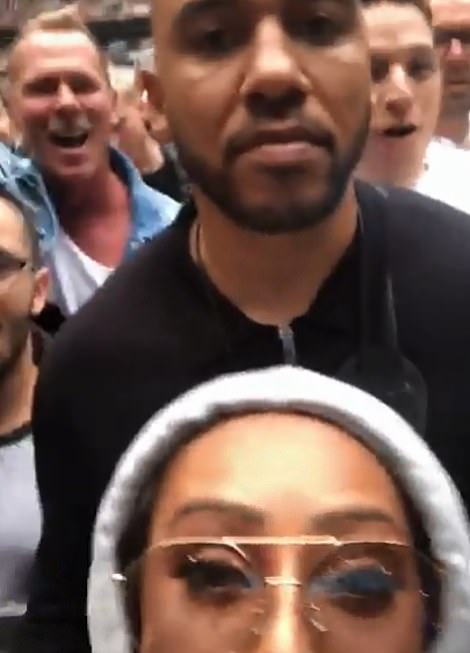 Soaking it up: Meanwhile, Mel B immersed herself in the crowd at Wembley as she joined her team in front of the stage to watch Jess Glynne perform her warm up act ahead of the main event

Taking to Instagram the songstress posted a black and white of herself alongside bandmates Mel B, Geri Horner Emma Bunton and Victoria Beckham in their 90s heyday, but noted that ‘five girls’ would be headlining the stadium in London.

However Victoria appeared to dash any last hopes that she will make an appearance during the last night of the tour, as she was pictured arriving at Sergio Ramos and Pilar Rubio’s wedding with husband David in Seville.

Earlier in the day Mel C shared a post which led to a flurry of comments from delighted fans who began to suggest that Victoria could be making a return for the final show, after pulling out of the reunion tour due to work commitments.

In a lengthy caption Mel wrote: ‘In 1994 five girls answered an advert in The Stage newspaper for a new girl band. 25 years later, those five girls headline Wembley Stadium, for the third night in a row!

‘Never in my wildest dreams could I have imagined that all these years later we would be playing to sold out stadiums, performing what I believe to be the best show we’ve ever done.

‘It’s an honour and a privilege to share a stage with my fellow Spices, @therealgerihalliwell @officialmelb @emmaleebunton and the gorgeous @victoriabeckham will always be missed (hopefully someday to return)!

The singer continued: ‘I never forget though, none of this would have been possible without you – the unbelievable fans. You have made a very normal girl feel incredibly special and I can never thank you enough for this.

‘I love you all and thank you from the bottom of my heart for allowing me to live this amazing life.’

Within seconds several eagle-eyed fans noted that Mel had hinted that all five girls would be taking to the stage at Wembley, sparking a social media hysteria as many claimed that this was evidence that Victoria would be rejoining the band for their last show.

One wrote: ‘You reckon Posh is gonna make an appearance for the last show?’ while another noted: ‘Five girls healine Wembley? Posh spice is making a comeback!?’