Hurricane Humberto forecast: UK to be battered by 10 days of rain in August downpours

Hurricane Humberto developed as a disturbance on September 8 and around a week later strengthened into a hurricane. This week it reached Category 3 status with winds reaching 120mph on Wednesday as the storm passed within 75 miles of Bermuda crossing over the open waters. The Met Office has now warned that the remnants of the Category 3 hurricane will smash the UK this week after the sunshine retreats on Sunday.

Hurricane Humberto will lash Britain with 10 days worth of showers and strong gales according to the Met Office.

After a week of hot sunshine with peaks of 27C, the hot weather will be shunted away by the remnants of post-tropical cyclone Humberto next week.

The Met Office said the remnants of ex-Hurricane Humberto will form into a new low-pressure system which will bring wind and rain to the UK by Tuesday.

The remains of Hurricane Humberto will join with low-pressure systems to unleash wet and windy weather across Britain next week. 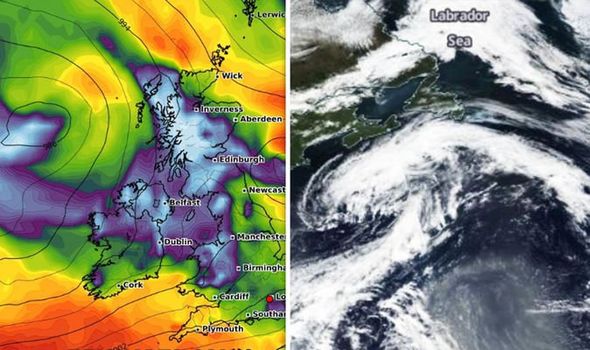 The last of the summer sunshine will hold out throughout today, but temperatures are expected to sharply drop from Sunday.

Earlier today, the Met Office issued a yellow weather warning from rain in Northern Ireland for 6pm to 9pm tomorrow.

The Met Office warning said heavy showers and thunderstorms are expected on Saturday evening, perhaps merging into longer spells of rain on Sunday.

The warning added that flooding of homes and businesses were likely, travel will likely be affected, spray and flooding on roads probably making journey times longer and interruption to power supplies due to lightning is possible.

Simon Partridge, a Met Office forecaster, told Mirror Online: “The remnants of Hurricane Humberto are expected to arrive across the UK on late Monday.

“It will bring some outbreaks of rain and some stronger winds. There’s potential for some strong winds and maybe a few gales around western coasts.

“Next week will feel more Autumnal than this week and will be a more unsettled affair. 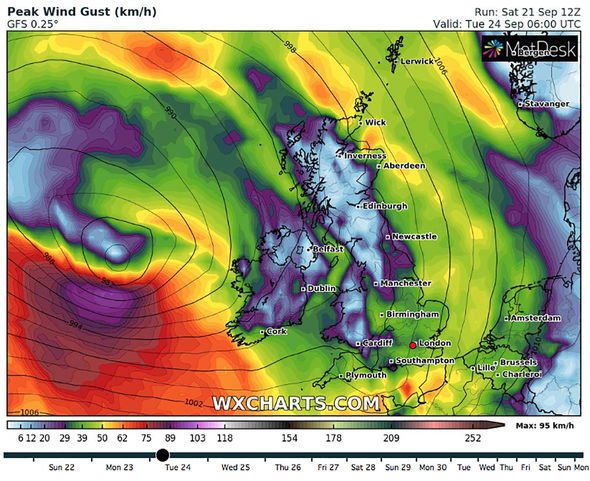 The wet weather is anticipated to arrive from the west alongside strong winds and thunderstorms which will cast away the last of the warm summer and usher in autumn.

Post-tropical cyclone Humberto, which is currently churning the Atlantic off the east coast of America, will help to drive the seasonal changes according to weather forecasters.

The Met Office outlook for Sunday predicts some northern and eastern areas will stay bright and warm, but heavy rain or showers will affect most parts.

Sunnier interludes are likely between the showers across southwestern areas later in the day. 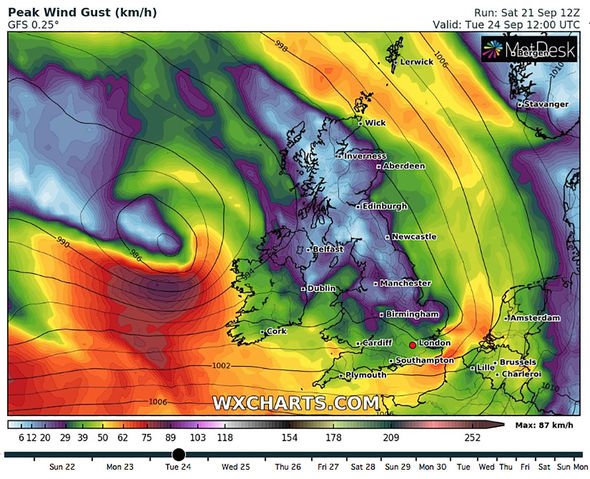 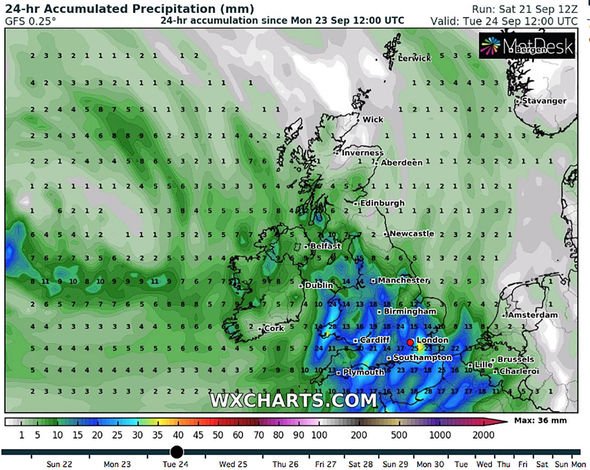 Between Monday and Wednesday many areas will stay dry at first on Monday, but rain will then spread northeastwards.

On Tuesday and Wednesday, the weather will be unsettled and breezy, with showers or longer spells of rain for most.

From Thursday, September 26 to Saturday, October 5, the Met Office predicts rain and strong winds will spread eastwards across the UK on Thursday, with gales possible in the north and west. 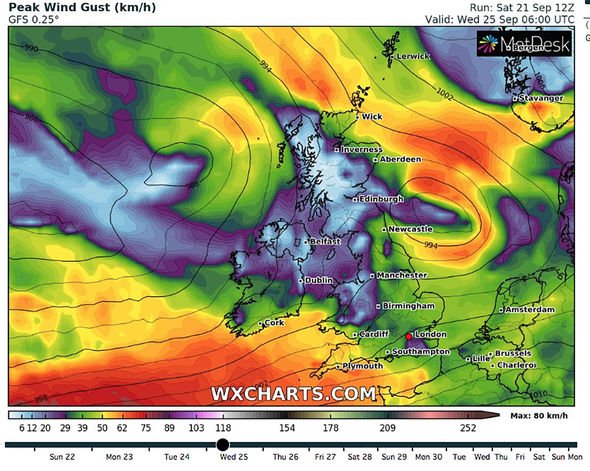 The Met Office forecast reads: “It will stay unsettled for the end of September, with a mixture of some sunny days, and cloudier days with more persistent rainfall.

“It is likely to be windy at times, with the potential for gales, particularly in the west and southwest.

“Temperatures will vary around normal, but in any drier spells, they may be warmer than average.

“Into the start of October, it is most likely that we will see a continuation of the changeable weather, although this is not certain yet.

“We could also see a return of more settled weather for the southeast, but still, in the northwest, it may remain unsettled, with wind and rain.”