They include Nathan Law, who fled Hong Kong shortly after the imposition of the draconian legislation, and Simon Cheng, a former British consulate worker. Both are in the UK. 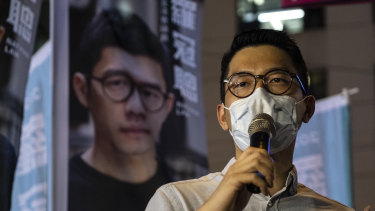 They cannot be sent back to face charges after Dominic Raab, the Foreign Secretary, indefinitely suspended extradition to Hong Kong as part of Britain's response to the national security law.

The legislation was adopted in June at Beijing's insistence. It targets subversion, secession, terrorism and colluding with foreign forces, with up to life in prison.

Critics say its purpose is to silence dissidents, arguing it signals the end of the "one country, two systems" approach agreed when Britain returned Hong Kong to China in 1997.

Yesterday's move came hours after Carrie Lam, Hong Kong’s chief executive, postponed legislative council elections that had been due to be held next month, citing the pandemic. 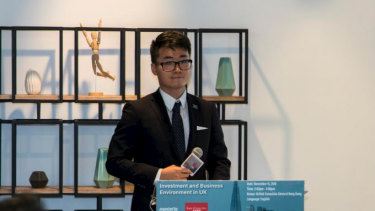 On Thursday, Hong Kong banned 12 pro-democracy campaigners from standing in the poll, and the cancellation had been widely anticipated.

Law, 27, who last month spoke of his fears for his family in Hong Kong, said yesterday that his only "crime" was that he "loves Hong Kong too much". He wrote on Facebook: "If the authorities are out to condemn you, they can always trump up a charge."

Cheng, who was held and tortured for 15 days while on a business trip to mainland China, has been granted asylum in the UK. He wrote on Facebook: "Just frame me up. Whatever the totalitarian regime wants."

CCTV, the Chinese state broadcaster, said the six were sought for "incitement to secession and collusion with foreign forces". It named the others as Ray Wong and Wayne Chan – who have asylum in Germany – Honcques Laus, who is in the US, and Samuel Chu.

It is the first time Hong Kong's police have used the extraterritorial power in the new law. While there is little prospect of any of the six being arrested or sent back, the aim appears to be to sow fear among protesters.

Lam yesterday invoked emergency powers to pause the elections, dashing the hopes of pro-democracy candidates winning a majority in the city's parliament, which would have allowed them to frustrate China's influence.

"This is a sleazy, contemptible political act to help thwart any victory on the part of the democrats," said Claudia Mo, an opposition legislator.

Lam said the move was "necessary" to avoid spreading infection, and had Beijing's "full support".