HENRY DEEDES on a Benny Hill moment in Westminster

If you think Brexit is a bum deal, take a look at this lot! HENRY DEEDES on a Benny Hill moment in Westminster

Traditional vaudeville features a variety of interspersed acts none of which bear any relation to the previous one. The performances are often frenetic, chaotic and bordering on the farcical. Shedding of garments occurs frequently.

Similarly barmy scenes played out in the House of Commons yesterday during yet another lengthy day of Brexit madness.

The main event occurred shortly after 5.30pm just as members began debating the evening’s indicative votes aimed at breaking the Brexit deadlock. Peter Kyle (Lab, Hove) was up on his feet, arguing the merits of a second referendum. 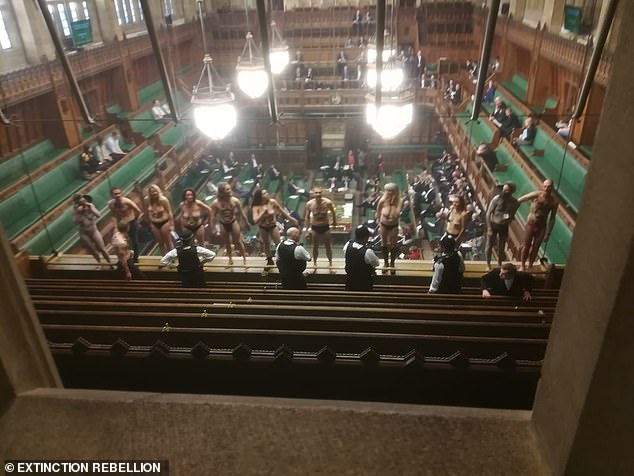 The source of mirth was coming from up in the public gallery. As Kyle spoke, a troupe of ten climate change protesters had casually ambled down to the front, removed their togs and were now showing our political class their bare behinds

Kyle is by no means the worst performer in the House, so there was some puzzlement when the chamber gradually began echoing to the sound of childish titters.

Was it something he’d said? Had Dennis Skinner (Lab, Bolsover) perhaps issued one of his charming soliloquies?

The source of mirth was coming from up in the public gallery. As Kyle spoke, a troupe of ten climate change protesters had casually ambled down to the front, removed their togs and were now showing our political class their bare behinds. 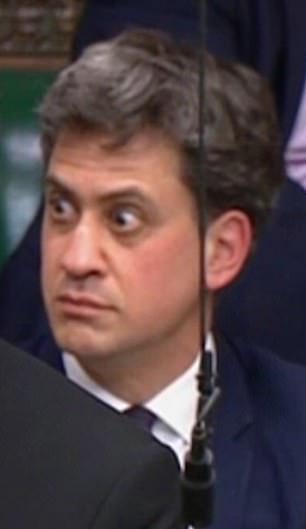 Well, after everything which has happened recently they can hardly complain they didn’t have it coming.

What took place over the next half hour was pure comedy slapstick. The protesters, a youngish bunch, their beneath-the-stairs modesty mercifully protected by garish black thongs, thrusted, gyrated and boogie-woogied their half-naked bodies in front of the chamber.

The Metropolitan Police were duly summoned. Still the swampies did not go quietly. Riotous scenes followed as the coppers made desperate lunges to catch the perpetrators. Hair flew, limbs flailed.

Best of all, since the protective glass in front of the gallery is soundproof, the entire shenanigans took place in silence to the rest of the chamber. It was like watching a saucy Benny Hill sketch without the daft music.

When the final die-hard – a 70s Bjorn Borg lookalike who’d glued himself to the glass – was finally captured, the poor plods did not look chuffed. What they would have given for Boris Johnson’s hastily ditched water cannon.

By now, down below, wonkish Nick Boles (Con, Grantham and Stamford), who’d tabled an amendment on a Norway-plus style Brexit, was making what was supposed to be the speech of his life. Instead, he found himself competing for MPs’ attention against a parade of wiggling bottoms. 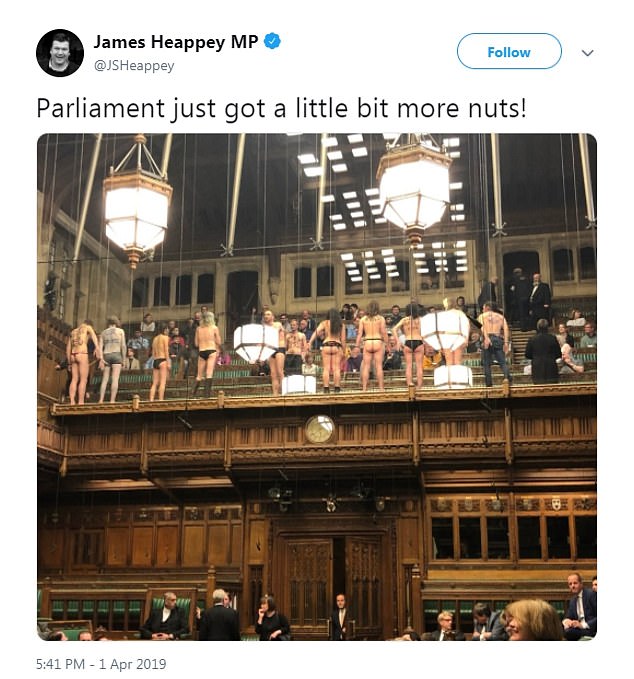 When the final die-hard – a 70s Bjorn Borg lookalike who’d glued himself to the glass – was finally captured, the poor plods did not look chuffed. What they would have given for Boris Johnson’s hastily ditched water cannon

The day’s proceedings had already begun in bonkers fashion. There was a point of order from Richard Drax (Con, South Dorset), a Brexiteer who wished to express regret at voting for the Prime Minister’s deal on Friday.

His bizarre outburst was met with predictable disgust down on the Government front bench. Security minister Ben Wallace curled his upper lip so high he could have balanced a coin on it. Immigration minister Caroline Nokes rolled her eyes and mouthed something possibly unsuitable before the watershed.

On to indicative votes. Pete Wishart (SNP, Perth) squirted treacle in the direction of Sir Oliver Letwin, who had been responsible for getting the votes on the agenda.

Letwin, he said, had achieved ‘more in the past five days than the Government has in three years’. Peony-cheeked Sir Oliver puckered his lips as though briefly considering blowing Wishart a smooch.

The ERG bunch, deludedly thinking they can still engineer a No Deal exit, huffed and puffed over the votes happening.

The Moggster became involved in a spat with recently departed Conservative Anna Soubry (Ind, Broxtowe), calling her a turncoat. ‘I can’t think why I left,’ barked Soubers sarcastically.

The debate never really recovered once the nudie invaders were captured, which was hardly surprising. They provided far more cheer and amusement than anything happening in the chamber. With any luck the silly rascals will be back for PMQs tomorrow.