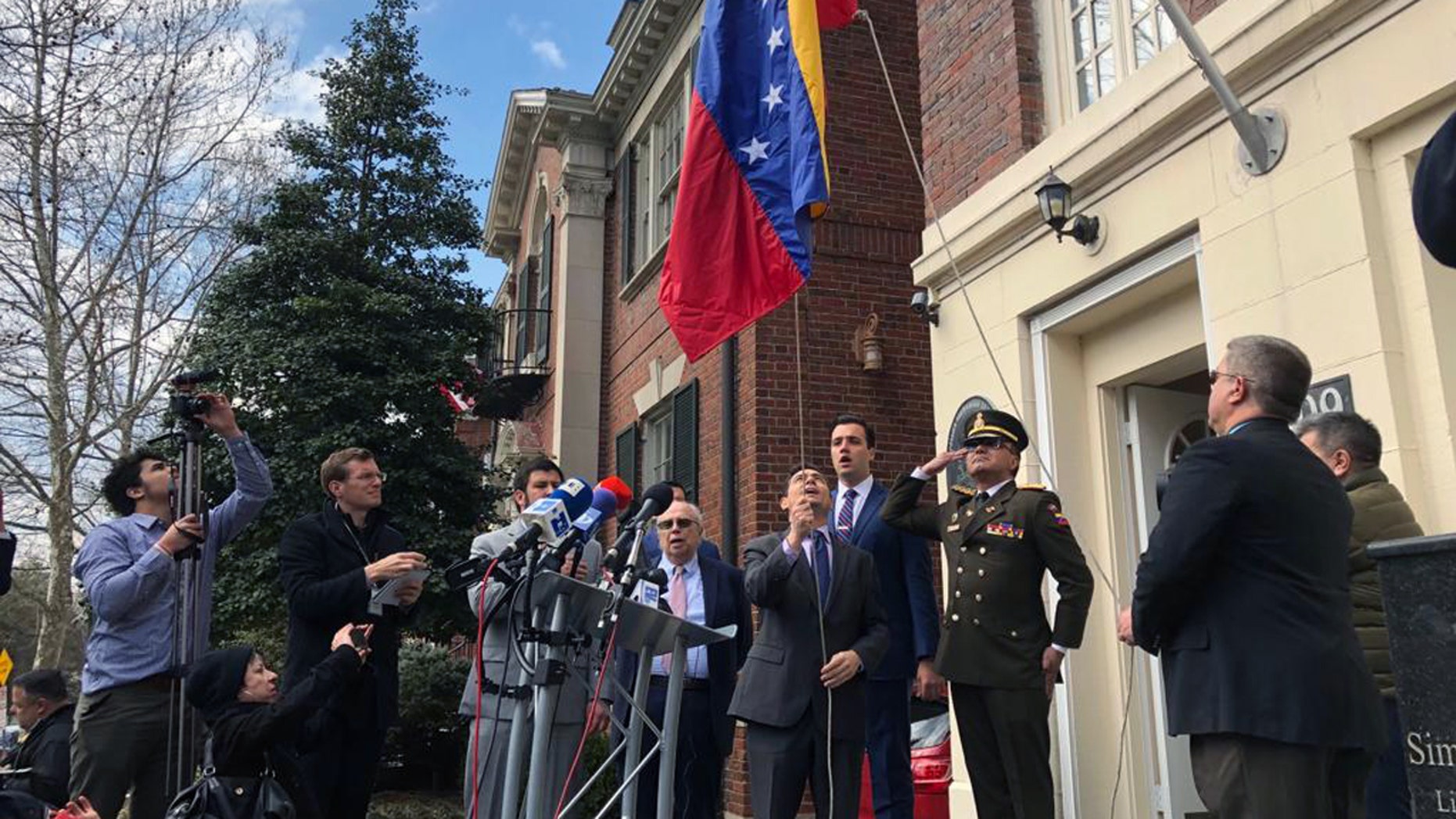 Spokesman Robert Palladino told reporters that Guaido's supporters were in possession of two military attache installations in Washington D.C. and the Venezuelan consulate in New York. Palladino added that the Trump administration was "pleased to support these requests."

Carlos Vecchio, Guaido's ambassador to the United States, posted videos on Twitter of diplomats and military officers walking through the vacant buildings. At the consulate in Midtown Manhattan, staffers removed images of disputed Venezuelan President Nicolas Maduro and his predecessor Hugo Chavez from the walls.

"It is impossible not to feel emotion as we enter this homeland, the sovereign territory of our #Venezuela, liberated from the usurper regime Of Maduro," tweeted Gustavo Marcano, another pro-Guaido official. "This is what will happen throughout our country when the usurpation ceases!"

In another diplomatic coup for the opposition, Panama also accepted a Guaido loyalist as Venezuela's ambassador Monday.

The Maduro government described the takeover by Guaido supporters as a "forced and illegal occupation" and called on the Trump administration to "immediately reverse said de facto forced occupation."

"The diplomatic offices of Venezuela in the United States can only be used by the official diplomatic agents representing the democratic and constitutional government of President Nicolás Maduro," said the government statement, which added, "If the government of the United States persists in the breach of its international obligations, the Government of the Bolivarian Republic of Venezuela reserves the corresponding legal and reciprocal decisions and actions in Venezuelan territory." It did not provide details on what those actions might be.

The last remaining American diplomats in Venezuela left the embassy in Caracas and flew home last Thursday. Maduro has cut diplomatic ties with the U.S., though diplomats loyal to him have remained in the United States as representatives to the United Nations and the Organization of American States.

Washington has thrown its support behind Guaido since he declared himself interim president on Jan. 23. The United States and about 50 other countries have recognized Guaido as Venezuela's legitimate leader and have supported his claim that Maduro was re-elected last year in an allegedly flawed vote.

Maduro has alleged that Guaido is a collaborator in a U.S. plot to overthrow the government in Venezuela, where the population has endured hyperinflation and a dangerous shortage of medicine and other necessities that the opposition blamed on the administration's socialist policies.