The Andrews government is preparing to scrap a slew of lingering pandemic restrictions – including mask mandates for hospitality workers, students and public transport users – once a peak in Omicron case numbers subsides.

The Age has spoken to numerous political and departmental sources who have confirmed work is under way to remove most remaining COVID-19 restrictions in Victoria once case numbers begin to fall. Health officials expect the latest wave of the virus to peak later this month.

Senior government sources said the aim after the peak would be to leave a “minimal footprint” of restrictions. That means within weeks it is likely that hospitality workers, primary school students in years 3 to 6, and public transport users will no longer be required to wear masks. 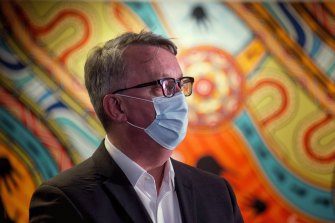 Mask requirements will remain for hospitals and aged care facilities to manage the impact on Victoria’s badly stretched healthcare system.

The government is also reconsidering rules forcing close household contacts of positive cases to isolate for seven days, even with no symptoms and negative test results.

One senior source said that while vaccine mandates would remain in hospitality venues for some time, the government was considering scrapping them in hairdressers, beauty therapy services, universities, TAFEs and gyms.

The state’s pandemic declaration, which was due to expire on April 12, has been extended as the government considers changes to the rules and weighs up competing economic, social and public health objectives.

Health Minister Martin Foley said on Tuesday that modelling showed the current wave of the Omicron BA.2 subvariant would peak in late April, before a “long tail of a slow decline”.

He said the official advice from the Australian Health Protection Principal Committee was that cases would not be as high as they were during the Omicron wave in January. Coronavirus cases have been steadily increasing in Victoria since mid-March. There were 11,192 infections reported on Friday.

“As we see higher levels of infectivity … as movement happens around the community, as there is more indoor activity as the weather gets colder, you would expect that to start to be reflected in chains of transmission,” Mr Foley said on Tuesday.

“[There will be] a peak in April and a long tail coming down in May.”

A spokeswoman for Mr Foley said the committee had been clear that any changes to transmission reduction strategies would need to happen after the BA.2 peak.

“We’re following the advice of public health experts, as we have always done, and when we have more to say we will,” she said.

It follows a warning by Mr Foley last Saturday that the subvariant could lead to “several hundred” extra hospitalisations a day in Victoria by the end of the month.

The Australian Health Protection Principal Committee recently warned against watering down seven-day quarantine rules for household contacts “at this time”, concluding “the escalation in case numbers is likely to increase, rather than decrease, any disruptions to broader societal functioning”.

“Making changes, including changes to quarantine settings, that will result in increased transmission in the community at a time when cases are already increasing or are at their peak, may result in further disruption to the health system,” the advice says.

University of Melbourne epidemiologist Professor Tony Blakely said the government should not consider scrapping mask mandates for children and hospitality workers until after the BA.2 peak.

“Now is not the time to ease or panic and tighten restrictions,” Professor Blakely said. 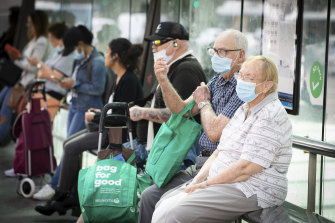 “Once case numbers start to fall by around 10 or 20 per cent is when we can look to easing further mask restrictions.”

Unlike Victoria, NSW does not require hospitality workers or some primary school children to wear masks.

But on other issues, including seven-day isolation rules, the two states have so far been in lock-step.

Victoria had intended to relax remaining restrictions until a spike in cases of the Omicron variant prompted the government to reconsider its plans and reimpose some rules in January.

On Friday, NSW Premier Dominic Perrottet said he had been in contact with Mr Andrews about changing isolation rules for close household contacts, saying “it makes sense”.

“I’ll continue to work with premiers, I’ve been in contact with the Victorian Premier in relation to this,” Mr Perrottet said.

“The faster we get to a point where we can relax the close contact rules, the better,” Mr Perrottet said.

James Wood, an applied mathematician at UNSW’s School of Public Health who also runs modelling for NSW Health, said the latest Omicron wave, driven by the sub-variant BA.2, had peaked in NSW and “cases are on the way down”.

“I am very confident we are passed the peak. Within Sydney, basically, every local government area should be seeing cases come down reasonably quickly,” Dr Wood said.

with Najma Sambul and Lucy Carroll