Britons finally able to reunite with loved ones this weekend may well be firing up the barbecue for the occasion, with the UK set to enjoy 79F (26C) temperatures, making it hotter than Benidorm.

Boris Johnson this week gave the green light for two households to merge into ‘support bubbles’ from Saturday, but only if one of them contains just one adult.

Couples who live in separate homes will be allowed to interact as though they were one household, spending time together indoors, not having to follow the two-metre social distancing rule and they can even stay overnight.

The new social bubble rules also mean that older people living alone will be able to go and stay with their children, or have their grandchildren to stay at their own homes to help with childcare.

The return of warm and sunny weather is likely to see many once again make a beeline for the coast, with beaches having been packed with visitors, even before the Prime Minister eased lockdown restrictions. 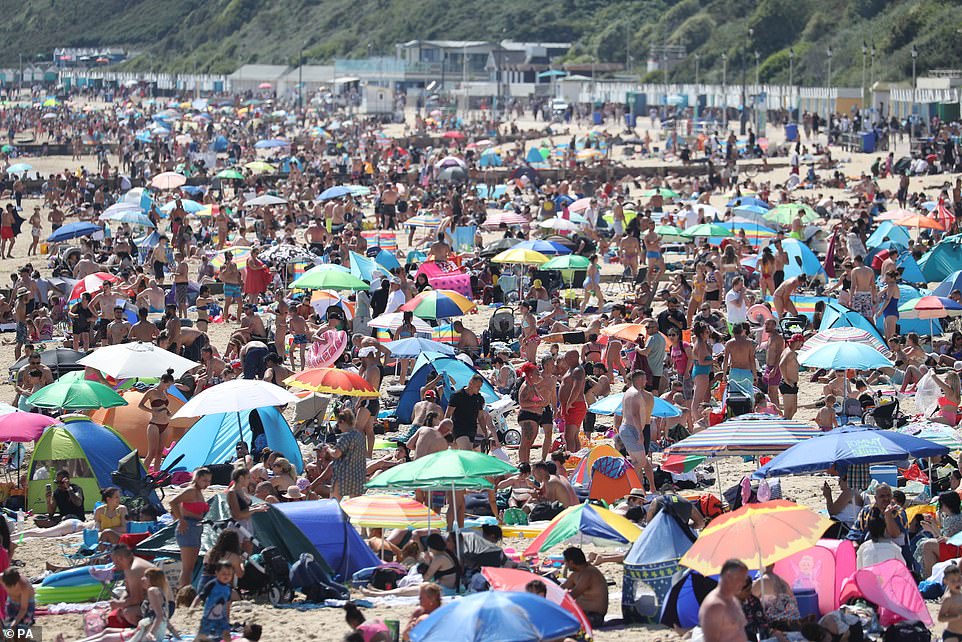 People packed the beach at Bournemouth on the last day of real sunshine on June 2, pictured, despite warnings to obey social distancing rules 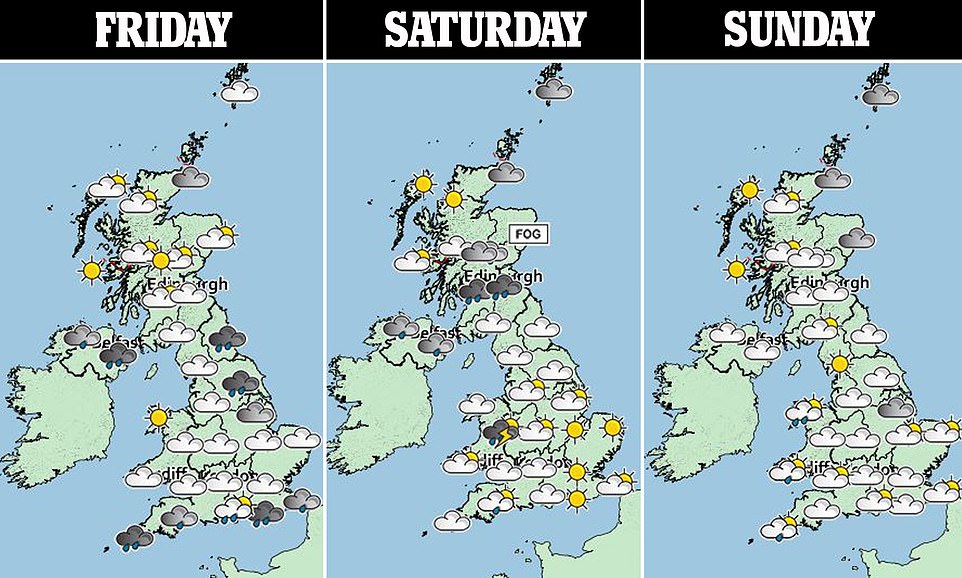 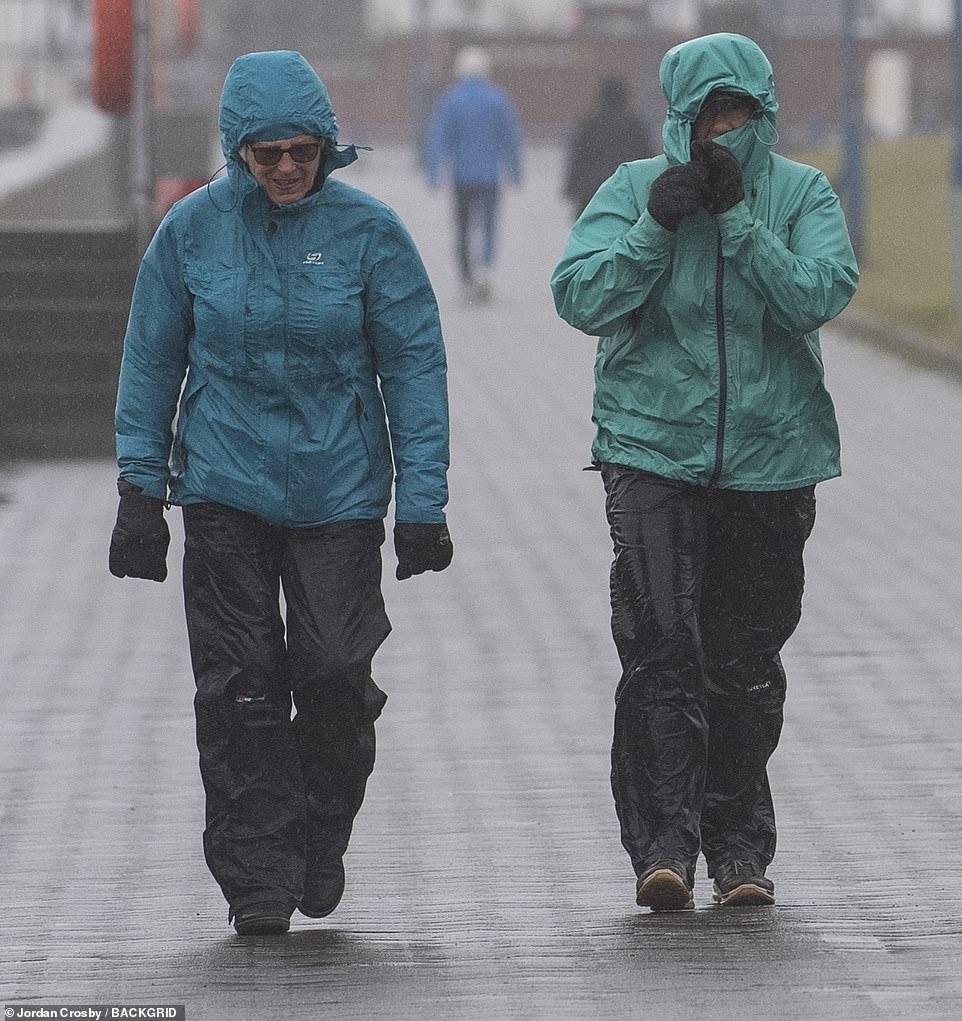 Two people out for a walk this morning at Seaton Carew, Hartlepool, were caught out by heavy rain, which is expected to continue falling either side of sunny spells this weekend 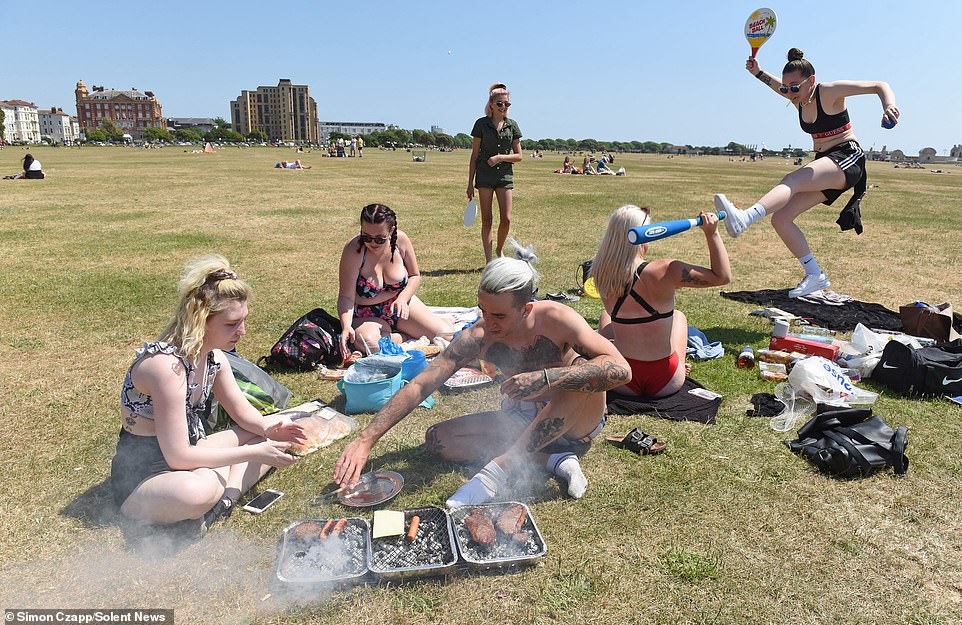 The reunion of loved ones from different households may see many take advantage by having a barbecue, as a group on Southsea Common, Hants, were pictured doing on May 30 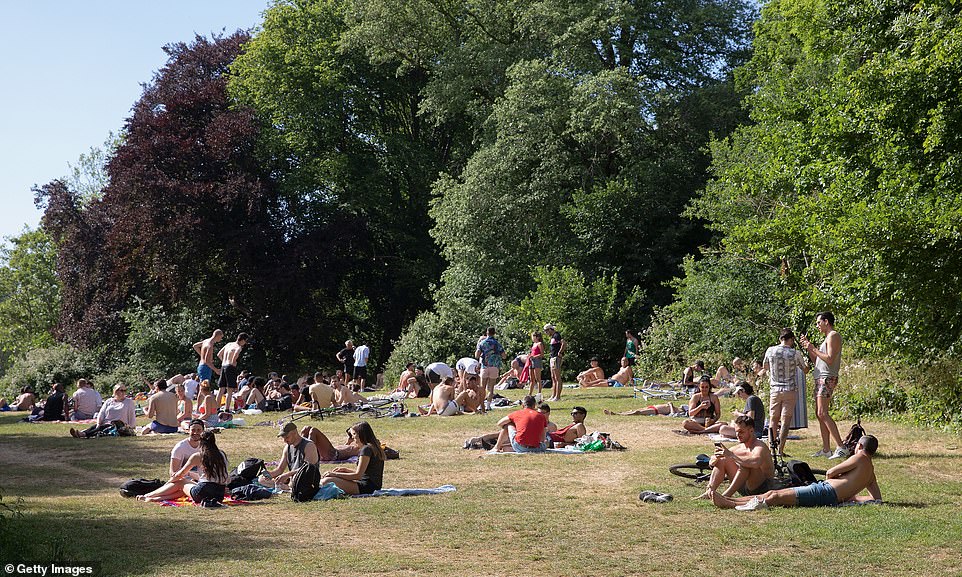 People sunbathed on a sunny day in London’s Hampstead Heath on June 2, pictured, and are expected to do the same as the mercury rises again this weekend

However, Britain will face another wet start to the weekend, with widespread rain expected later today and into Saturday.

Met Office spokesperson Nicola Maxey told MailOnline: ‘We are looking at a showery picture for tomorrow, including heavy thunder in some areas and rain particularly in the east, north and south-west.

‘There is a chancy of sunny spells in between showers, but it’s a fairly changeable, unsettled picture as we go through the weekend and into next week.

‘Temperatures will pick up, though, and it could feel humid and close if you are under a cloud.’

During the spells of sunshine tomorrow, the mercury could rise to as high as 79F (26C) in London, and just below in many other areas including Birmingham, Manchester and York.

Temperatures are not expected to reach the 20s in Scotland, however. where it is likely to remain wet for most of the day.

The rain is then expected to return on Sunday, with fog also likely in some areas, particularly in the north-east, with sunny spells again coming in between scattered showers.

Despite the showers, though, some areas could experience temperatures up to 75F (24C).

‘The picture is not really changing into early next week as the unsettled weather continues,’ Ms Maxey added.

‘We’re likely to see a mix of sunshine and strong showers, with a risk of thunderstorms for the first half of next week.’

England in particular has been beset by rainfall in recent days, with more than double the amount of water falling in the first 10 days of this month, compared to all of May.

Indeed, last month was the warmest May on record with global temperatures 1.13F (0.63C) above average, according to the European Union’s climate change monitor. 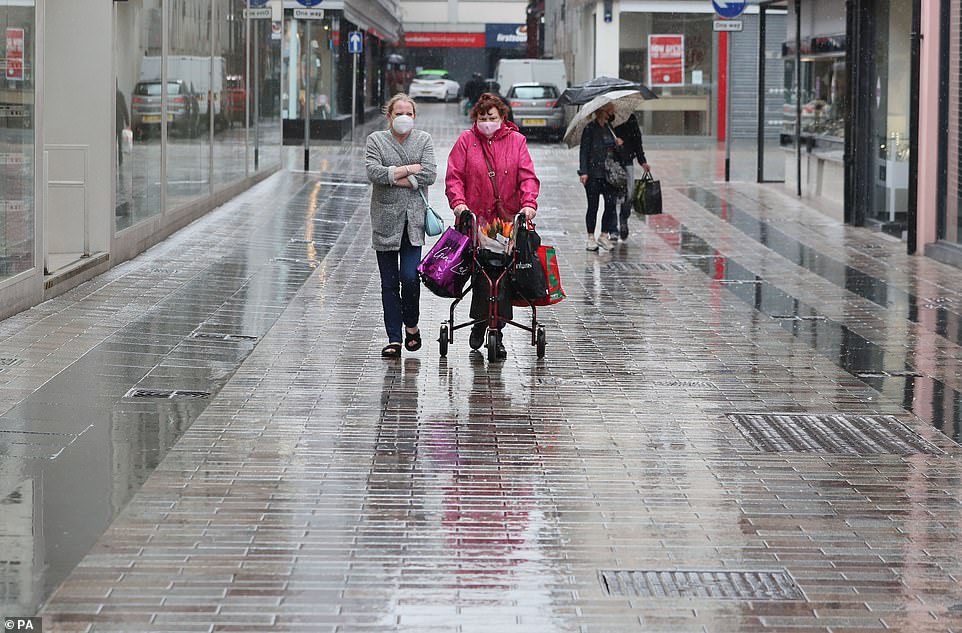 Shoppers in Belfast, Northern Ireland, braved the rain this morning after all shopping centres and retailers were given the green light to reopen in a significant relaxation of coronavirus lockdown restriction 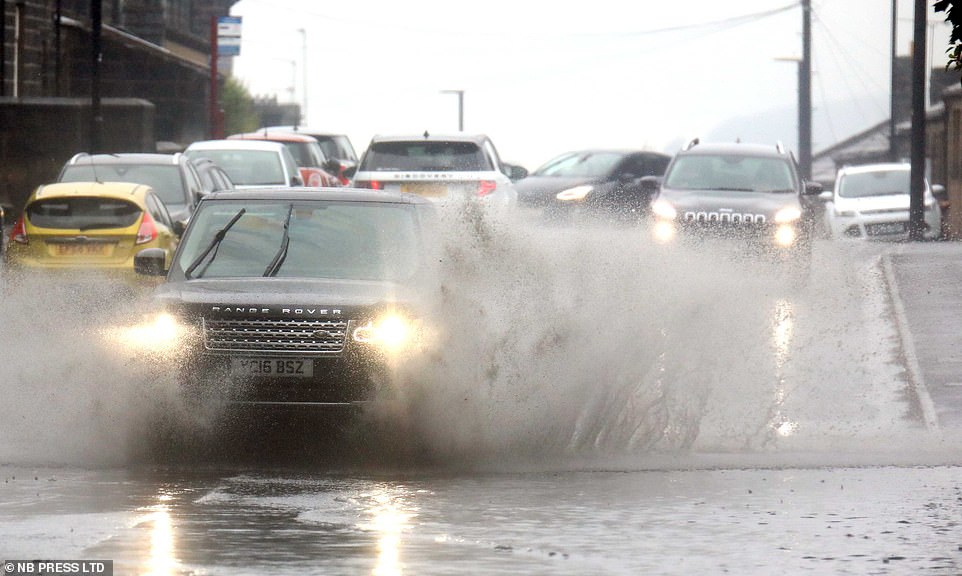 A car creates a large splash as it drives through a puddle in Yeadon, Leeds, earlier today, with more rain expected this evening 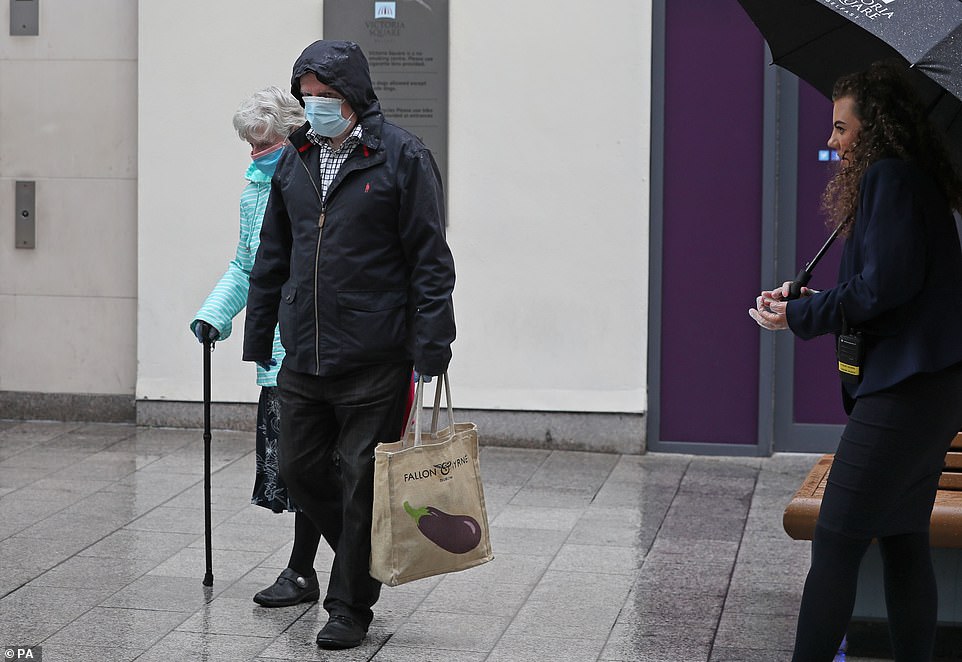 The UK has been beset by rainfall in recent days, with many areas seeing more water falling in the first 10 days of this month, compared to all of May. Pictured: Shoppers brave the rain in Belfast this morning

The lifting of further restrictions this week is designed to help the UK’s ‘many lonely or isolated people’ who are seen as struggling the most during the months-long lockdown.

The Prime Minister said: ‘I know how how difficult the past months have been for people cut off from their family and friends.

He admitted that there would be many people disappointed by the restrictions on eligibility but cautioned that the change was not an excuse for a free-for-all.

‘We are making this change to support those who are particularly lonely as a result of lockdown measures,’ he said.

‘It’s a targeted intervention to limit the most harmful effects of the current social restrictions.

‘It is emphatically not designed for people who don’t qualify to start meeting inside other people’s homes, because that remains against the law.’

Mr Johnson also confirmed shops could reopen on Monday if they abide by social distancing rules, as well as zoos, safari parks and drive-in cinemas.

Churches and other religious buildings can also re-open for individual worship, but there was no further announcements in relation to the opening of pubs.