'Goldilocks of the Hamptons' keeps sneaking into mansions to SLEEP

A troubled homeless woman has been caught breaking into multiple Hamptons mansions to try and take a nap.

Peace Ofoego, 32, has been dubbed ‘Goldilocks of the Hamptons’ over her antics in Westhampton, and has been arrested three times since the end of May.

One resident, Peter Nesvold, even snapped images of Ofoego as she tried entering his home while his wife was inside. Police were called, and Ofoego was arrested and led away shortly afterwards.

Another, John Mallon, collared Ofoego inside his $35,000-a-month rental. He called police and asked them to record the incident, but declined to press chagrges.

Ofoego is originally from Nigeria and claims to have fled an abusive marriage. She has also said she is hoping to regain custody of her children.

The troubled woman has caught entering seven properties in the ritzy town, but only charged over three of the incidents. 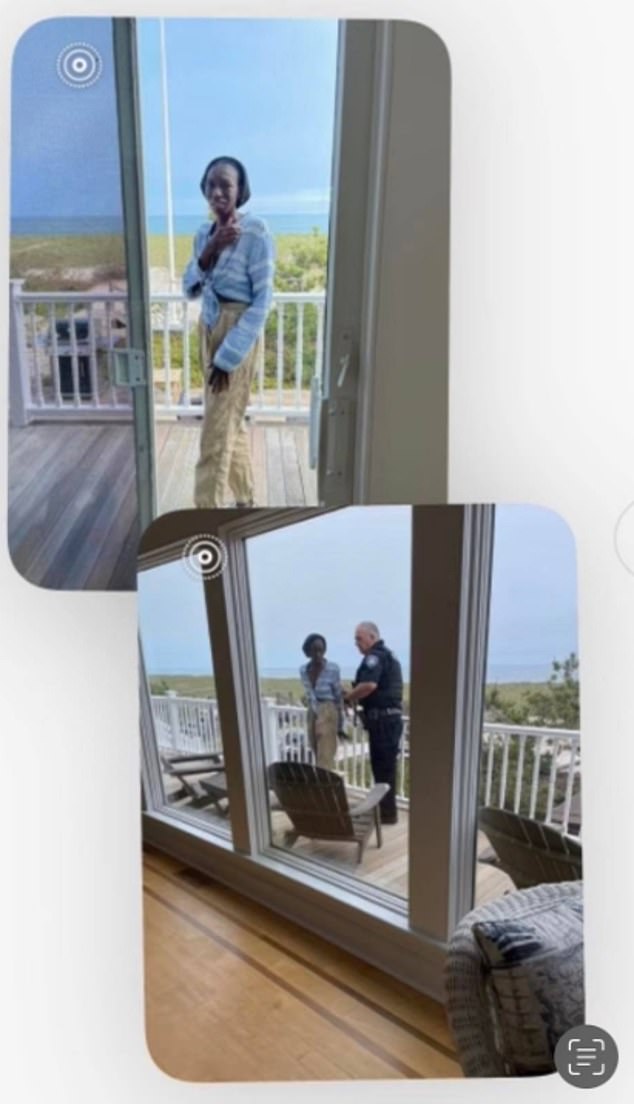 Westhampton resident Peter Nesvold shared these images of Peace Ofoego trying to break into his home while his wife was inside. Ofoego was subsequently arrested

Ofoego was caught staying in this $35,000-a-month home in Westhampton. Owner John Mallon called the cops to ask them to record the incident, but declined to press charges

Ofoego was first spotted in Westhampton Beach on Memorial Day weekend, when a resident reported to police a ‘black female wearing a black trench coat and sandals’ was wandering through the backyard construction site of his four-bedroom rental property – just about a mile from the village’s train station.

When police arrived on May 29, she told them he had no identification or credit cards because she had been robbed while living in Washington DC.

She also said she traveled to New York City a few days earlier, from where she boarded a rail road to Westhampton Beach, where she said she was looking for a hotel room near the ocean.

Police then helped Ofoego find a local homeless shelter, the Post reports, where she said she wanted to charge her computer ‘and transfer funds to an account.’

But just a few days later, on June 2, she was seen wandering through the wealthy neighborhood again – and it would not be the last time.

Over the past few months, Peace Ofoego, 32 (pictured) has been found sleeping in Westhampton homeowners’ backyards, pool houses and second-story bedrooms 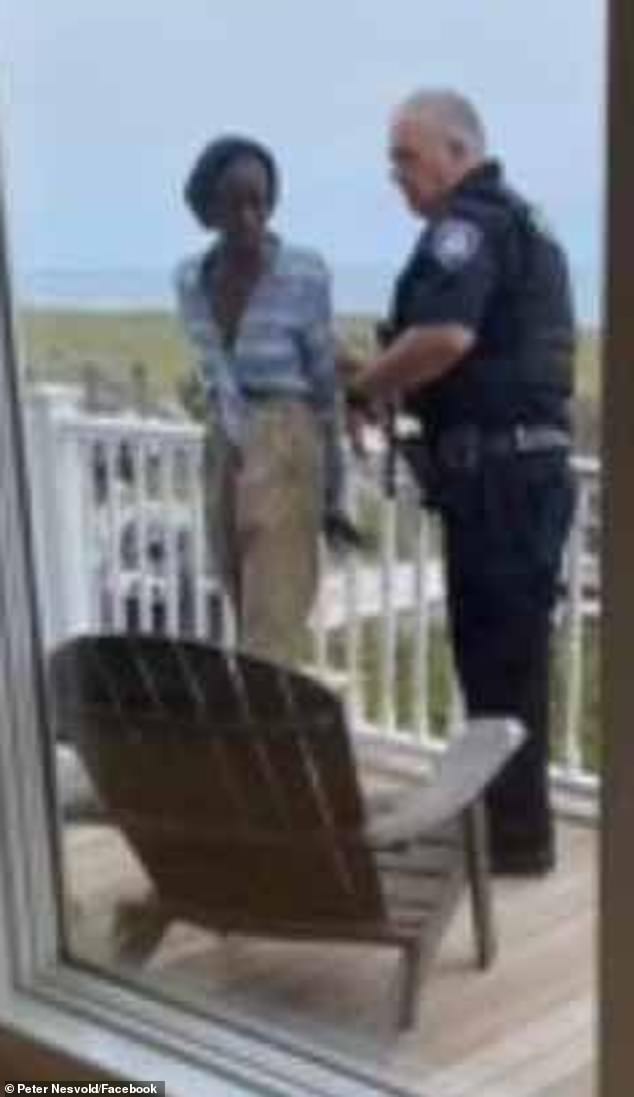 She has been arrested 0three times for trespassing since the end of May, but has entered a total of seven properties within the village

Authorities say that Ofoego passed through an unlocked gate that leads from the beach to a $275,000 eight-bedroom rental on exclusive Dune Road.

She then allegedly entered the house through an unlocked back deck, where she lounged until police showed up – and charged her with criminal trespass.

‘Subject stated she was staying at a house down the road and entered the stated residence to ask somebody about a restaurant to eat at,’ a police report obtained by the Post says.

Then just two days later, on June 4, Ofoego was again spotted ‘staying’ in the pool house of a property that rents at $35,000 a month.

When police showed up that time and were attempting to find another homeless shelter for Ofoego, ‘Peace began walking away,’ an officer wrote in his report, addingthat he warned her that if she kept wandering into village homes she would again be arrested for trespassing.

‘She left the area on foot.’

Ofoego’s last encounter with the Westhampton police came on June 24 at a ‘quintessential beachfront estate’ that features seven bedrooms and was listed for rent at a whopping $280,000 in July and August.

According to the police report, she walked into the second-story bedroom, startling the homeowner.

Police were then called to the scene and arrested her.

But when they were processing her paperwork at the police department, Ofoego is said to have told the cops they  were mistaken and she just ‘went inside to look at the rental.

‘You just want to arrest me,’ she allegedly accused them. ‘All I did was look for a rental.’

Ofoego now spends her days walking through the village and along the beach, residents have reported on Facebook.

Some have said they saw her on back roads, on Main Street, at a gazebo where bands play during the summer months and at a local marina.

Sometimes she is seen wearing the same black trench coat and black knit beanie she was reported in back in May – despite hot temperatures.

Janet Feldman, for example, commented on the Westhampton Beach Area Community Forum, said she saw Ofoego walking on the beach and down Dune Road while walking her dog in the morning.

‘She seems mentally unwell for sure,’ Feldman wrote.

Marie Costelli also commented: ‘A few weeks ago, she approached me in Lidl asking for help. She needed money to pay for her groceries.

‘As I was handing her some cash, which she took, a man who may have been the store manager asked her to leave,’ Costelli said. ‘I felt sorry for her, I hope she gets the help she needs.’

Ofoego now says she intends to defend herself in court, refusing a court-ordered public defender at hearings on July 6 and July 13.

At one of those hearings, Liam Anthony DeFronzo wrote, Ofoego was arguing with the judge.

And days earlier, the Post reports, when officers were trying to serve her with a subpoena to appear in court, she told them they were harassing her and threatened to sue them.

‘It seemed to me she is angry with where she is in life and with the system,’ DeFronzo posited. ‘Ultimately, it seems she’s looking for a place to sleep, but of course you never know what she might do, and it’s not acceptable to break into homes.

‘Does she truly want help in finding some sort of shelter and is doing this as a cry for help? I don’t know, but I felt compelled to help her the other day in the court room,’ he said.

Ofoego is due back in court on July 27.

Residents on Facebook have reported seeing her walking throughout town

Ofoego now claims she was fleeing her abusive husband and is trying to find a place where she can raise her children.

She told the Post she was born in Nigeria, but has lived in the United States for the past 13 years – coming o the country when she was 19-years-old and settling in Baton Rouge, Louisiana, where she began studying medical science at Southern University.

She also said her father is a journalist in Nigeria, and she was educated in boarding schools before coming to the United States.

Ofoego wound up in Westhampton, she claims, after she fled her abusive husband in Florida. She then made her way to DC then to New York City, where she claims she was violently pushed down subway stairs in May.

She then made her way to Westhampton, where she said did not know the beaches were restricted to local resident.

‘All I want is just some simple kindness from strangers,’ she told the Post. ‘But no one cares about me.’

Ofoego also says her parents in Nigeria are aware she is homeless but cannot do anything about it.

She has previously told cops that she has an aunt back in Louisiana, and when they called Ugoo Onyenekwu, she said Ofoego was ‘moving around looking for a location where she could regain custody of her children who are currently in California.’

It is unclear how many children Ofoego has, but a November 4, 2020 police report from Florida shows she was stopped for ‘failure to register a motor vehicle.’ She had ‘seven juvenile passengers’ in the car at the time.

Police reported that she produced ‘a foreign passport’ as identification, and failed to show up at her arraignment.

She was stopped by officers again in Lake County, Florida in 2017 for driving without a license – to which she allegedly claimed she never had one.

Ofoego has since lived in several locations in Florida over the past few years, the Post reports, and worked with her husband Marquis Duvuall Hudson for a company called Meticulous Cleaning Services in Boca Raton. 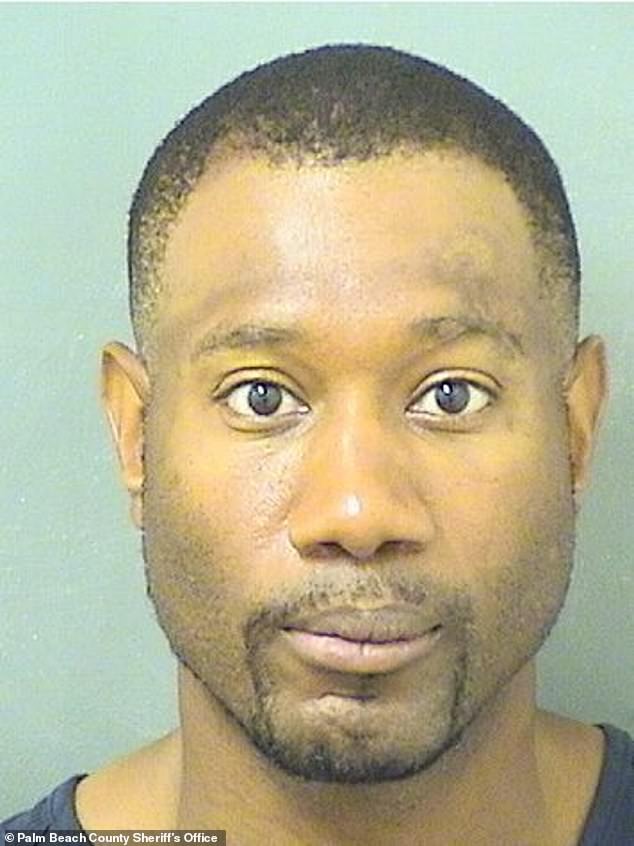 Court documents seem to back her claims that her husband, Marquis Duvuall Hudson, 40, was abusive. He was charged with ‘domestic battery to a pregnant female’ in 2018 but the charges were dropped when Ofoego did not show up to court

Court documents seem to back her claim he was abusive.

Hudson, now 40, was charged with resisting arrest and assaulting an officer in 2017. He was then sentenced to 11 months in prison.

After he got out, police records show he allegedly struck Ofoego while she was pregnant.

She had called cops the day after Christmas in 2018, saying that five days earlier they had a fight while putting cleaning supplies in a storage locker.

A police report claims Hudson ‘was accusing her of trying to leave the country, and the two got into an argument’ during which ‘Marquis grabbed her throat and began choking her.’

Ofoego told cops she was having trouble breathing and nearly passed out.

‘I asked Peace if Marquis is capable of killing her or her children, [to] which she stated “yes,”‘ Officer Tobias Andrews wrote.

‘Marquis at the time of the battery was aware Peace is pregnant.’

He was charged with ‘domestic battery to a pregnant female,’ but when Ofoego failed to show up to court to provide testimony against him, the case was thrown out.