The video was captured by a team of researchers studying the impacts of light deprivation on deep sea creatures living in the “midnight zone,” 3,280 feet (1000 meters) below the surface.

Footage of the encounter shows the moment the giant squid revealed itself to the scientists.

Initially, the creature reached one of its tentacles out of the pitch black, shadowy waters before latching on to a specialised probe.

The probe was outfitted with a fake jellyfish that mimicked the invertebrates’ bioluminescent defence mechanism, which can signal to larger predators a meal may be nearby, to lure the squid and other animals to the camera. 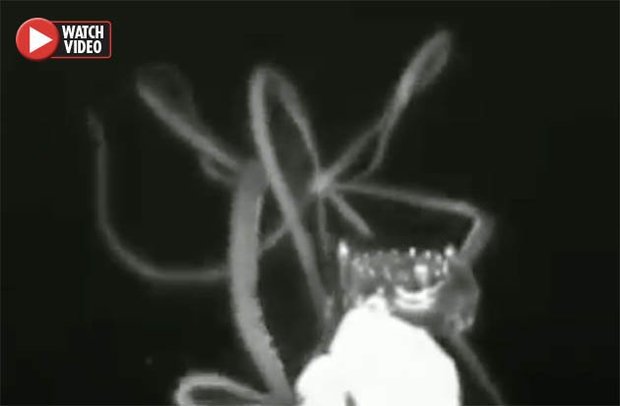 The creature slowly revealed the rest of its hauntingly long tentacles to the camera before, finally, an honest-to-God giant squid blooms from the darkness and attacks.

Although, the creature only appeared briefly before abruptly vanishing back into the darkness.

To bring the historic image to the world, the 23-person crew had to use a specialised probe to lure the elusive creature out and find it among hours and hours of video footage.

The footage then had to survive a sporadic lightning strike to the metal research vessel that threatened scientists’ computers.

Following on from that a water spout then formed suddenly off the port bow.

And though the creature sure looked like a giant squid, the storm made it difficult to reach an expert on shore who could properly identify the creature.

Edith Widder, one of the leaders of the expedition, described the ordeal as “one of the more amazing days at sea I’ve ever had.”

The remarkable expedition was funded by Atmospheric Administration and the National Oceanic.

It comes after a diver filmed himself being mauled by a man-eating squid.