Witness Neill Greenaway filmed the encounter at the San Lameer resort near the village of Southbroom in eastern South Africa.

The mambas wrap around each other in an attempt to press each other’s heads onto the ground.

But no clear winner can be determined as they write on the resort’s paving bricks. 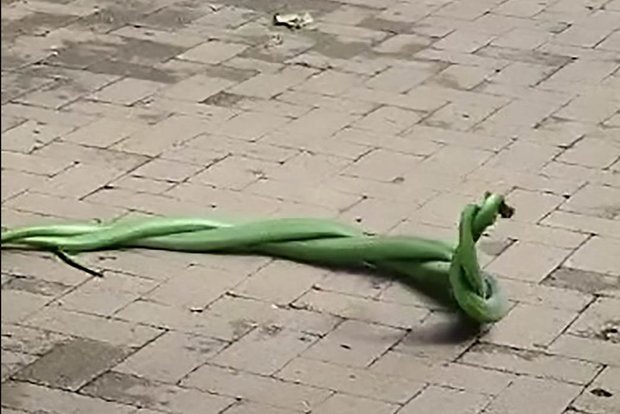 The terrifying snakes, which are so venomous they can kill a human in less than 30 minutes, are normally solitary and rarely seen as they live in trees.

But they come out during the breeding season, between April and May, when the male snakes often fight over females.

Johan Marais, from the African Snake Bite Institute, said the male snakes were attracted into the open by pheromones from the females.

And when more than one male was attracted by a female, the result was often a lengthy battle which resembled a wrestling bout.

He said: “This wrestling match can go on for half an hour to an hour, and the moment the weaker one gives up and the stronger one has won the battle, he gets to mate with the female.

“The moment you see snakes twisted around each other you know it’s male combat and not mating behaviour.”

Mr Greenaway posted his video on a Facebook page, called Snakes of South Africa, where it has caused a sensation.