Deal with your own ‘toxic’ waste, says Jakarta

Jakarta: Indonesia's foreign ministry has delivered a blunt message to the Australian companies shipping contaminated waste offshore: stop sending your rubbish overseas and deal with the problem at home.

In an interview with the Sydney Morning Herald and The Age on Thursday, the acting spokesman for Indonesia's foreign ministry, Teuku Faizasyah, said the companies that had shipped so-called "toxic" waste to his country simply had to take it back.

"Those who sent the containers must re-export it back to the country of origin," he said. 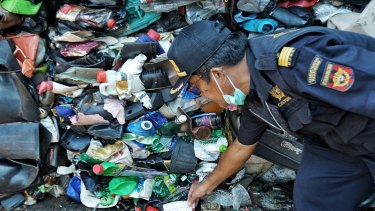 A container of Australian plastic waste impounded at the port of Batam, Indonesia.Credit:Amilia Rosa

"The items we found in the containers are considered toxic and did not necessarily correlate with the items listed [in the shipping papers]."

Faizasyah described as "speculation" the idea the issue could damage bilateral relations between Australia and Indonesia, and refused to comment on it. President Joko Widodo had ordered his environment ministry to take the lead in dealing with the issue, Faizasyah said.

However, his comments signal that the political establishment in Jakarta is watching this issue – and how Canberra responds to it – very closely.

The Sydney Morning Herald and The Age revealed last week there were eight containers of Australian household recycling sitting on the docks at Tanjung Perak port, in Indonesia's second largest city of Surabaya.

The containers were supposed to contain only paper, which was to be recycled, but instead also contained plastic waste, electronics, used nappies and other material.

The containers have been classified as containing B3 waste, short for Bahan Berbahaya dan Beracun, or hazardous and toxic materials including chemicals, minerals, rotting food, engine oils, electronics and medical waste.

Another container of B3 waste is impounded at the Batu Ampar port, in the city of Batam. Indonesia plans to ship all of the containers back to Australia – as well as dozens of others to the United States, United Kingdom, Germany and other countries. 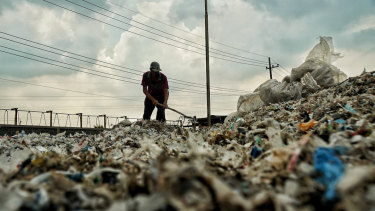 A man in Bangun village in East Java spreads out wet paper company’s waste to dry it for use for burning in tofu manufacturing.Credit:Amilia Rosa

The containers in Surabaya were sent by Oceanic Multitrading, a Sydney company owned by Indonesian-born businessman Nisin Sunito, while the container in Batam was sent by Visy, which is owned by Australia's richest man, Anthony Pratt.

Faizasyah pointed out that Indonesia was already struggling to deal with the amount of waste polluting its waterways and oceans – the country is the second largest polluter of the world's oceans after China.

"While we try to do our best to deal with this problem, we should not have to receive this toxic or un-recyclable waste from other countries," he said.

"Some countries have the capacity to deal with recycling and waste, including dealing with toxic material in a manner that does not create pollution. They [the companies] must deal with this problem internally. But for some companies it is perhaps easier to send the waste, rather than dealing with the waste in their home country," he said.

"It’s in our common interest to deal with this issue. The technology isn’t cheap, but the companies need to invest." 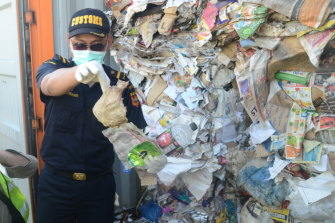 Indonesian Customs official Dhion Priharyanto holds up a used nappy, soft drink containers and a plastic of organic raspberries mixed in with paper that was supposed to be recycled. Instead, it will be sent back to Australia.Credit:James Massola

"I think both countries are very serious about the issue of sustainable development and reducing pollution, both parties are parties to the Basel convention. We both want to stop polluting the environment," Faizasyah said.

The 1992 Basel convention is a treaty that governs and restricts the movement and disposal of hazardous waste between countries.

The Morrison government has promised to co-operate with countries that have been sent Australian waste that cannot be recycled, and suggested it might be prepared to accept the return of the waste to Australia.