A manhunt is underway for two burglars who escaped from an open prison in Derbyshire on Tuesday.

Sam Hawkins, 34 and Darren McKay, 37, were caught on camera jumping over the fence at HMP Sudbury at around 10.15pm.

Derbyshire Police have warned the public not to approach dangerous pair if they are spotted.

One of the men was seen carrying two bags while the other held a single rucksack with a towel around his neck.

Police said they were last seen on the A515 heading towards Ashbourne after they absconded from the Category D open prison.

McKay is described as being around 6ft 2ins tall, with blue eyes, brown hair and is of stocky build with tattoos on his arms.

He was convicted at St Alban’s Crown Court for burglary and driving offences last year and has links to Luton, Bedfordshire, and Harpenden, Hertfordshire.

Hawkins was jailed at Snaresbrook Crown Court in 2019 for burglary, theft and driving offences. 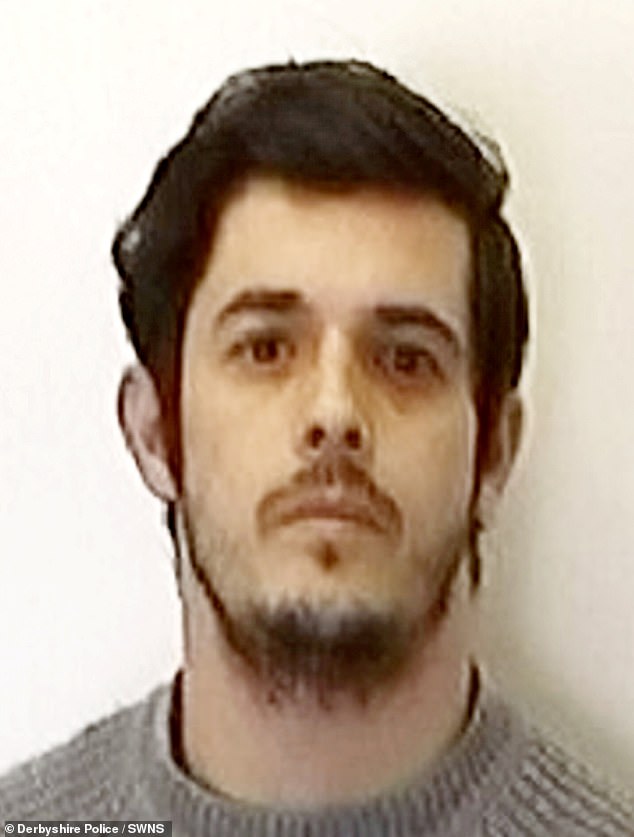 Sam Hawkins (pictured), 34, was jailed at Snaresbrook Crown Court in 2019 for burglary, theft and driving offences

He was part of a gang locked up for nearly 50 years for a series of ram raids across the capital and is described as being 5ft 7ins, with brown hair, brown eyes and of medium build.

The criminal group was so prolific that when its members were jailed, residential burglaries in the area they targeted suddenly dropped by a quarter.

Police said Hawkins has links to the Bexley Heath, Plumstead and Thamesmead areas of London.

It is not known when they were placed into the Category D prison – which is the lowest of Britain’s A to D security rankings.

Prisoners who are transferred to such sites – which often allow for days out on licence – are considered to be at a very low risk of trying to escape.

Anyone who has any information about their current whereabouts is asked to contact Derbyshire Police using crime reference number 1278-111021.

The force can be contacted by calling 101 or by messaging them online.