Daily UK Covid cases fall by almost 4,000 in 24 hours as 13,864 test positive but deaths at highest for three months

THE number of coronavirus cases in the UK today fell by almost 4,000 – but deaths are at their highest level for three months.

The grim figure is the highest it has been since June 25 when 99 deaths were reported in 24 hours.

Cases have nearly tripled in two weeks – with a total of 575,679 people now testing positive for the killer bug in Britain.

And it is well over last Thursday's spike, when 6,914 more cases were logged and almost triple the rise a fortnight ago (6,634).

It comes after Public Health England admitted they had missed 15,841 cases from their official stats between September 25 and October 2.

The backlog led to an over-inflated record high of 22,961 additional cases on Sunday.

And the current infection rate is still believed to be smaller than at the peak of the pandemic, when it is likely 100,000 cases were being reported every day through March and April.

The latest victims were aged between 42 and 98 – with all suffering from underlying health conditions.

Wales today saw two further deaths – bringing the total in the country to 1,646.

In Scotland, six more deaths were recorded – with their total now at 2,544.

There were no new deaths recorded in Northern Ireland. 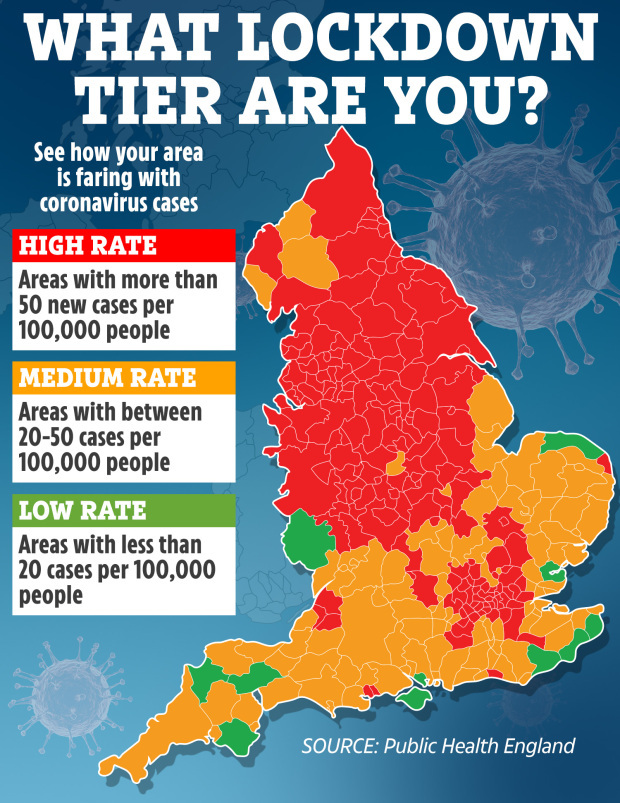 It comes as a huge study today revealed Northerners are nearly twice as likely to have coronavirus – with one in 100 currently infected with the bug.

This is compared to one in 170 having Covid-19 nationally.

The figure – which represents how many other individuals each case goes on to infect – was 1.39 in early September.

But the Yorkshire, the West Mids and the North West are suffering – with all of their R rates between 1.27 and 1.37.

In contrast, it is below one in London – meaning the number of cases are currently falling in the capital.

But new data from the Office for National Statistics (ONS) revealshow cases in England have more than doubled in a week with 17,200 people a day being infected.

This is up from the previous week where 8,400 cases were recorded.

The figures, which don't include those in hospitals, care homes or other institutional settings, also reveal infections in teenagers and younger adults are also rising.

Meanwhile, workers in lockdown areas where business have been forced to close will receive two-thirds of their wages in a new furlough-style scheme.

Chancellor Rishi Sunak set out measures of his new economic package today in a hint the Government will force businesses – including pubs – to shut.

Ministers are expected to outline a three-tier local lockdown system on Monday.