Czech migrant, 52, who terrified dog-walkers by shooting birds with an air rifle in a public park while wearing full combat gear avoids jail after claiming it’s a harmless hobby in his country

A Czech migrant who terrified dog walkers by shooting at birds with an air rifle while he crouched in bushes at a public park has avoided jail after saying its a harmless hobby in his home country.

Armed police swooped on Springwater Park in Radcliffe, near Bury, after a dogwalker spotted Pavel Jakes shooting at birds with a highly-powered air rifle.

Jakes, 52, had been crouching in bushes at the beauty spot, when a dog walker came across him and called the police, after he got up to pet her dog while holding an air rifle, which was wrapped in camouflage material, with a silencer and scope attached.

He faced a prison term of up to 18 months after admitting to possessing a firearm and ammuntion, and having an offensive weapon in a public place.

Instead he was given an eight  month term, suspended for 18-months, after his defence solicitors explained it was his ‘pastime,’ back home in the Czech Republic. 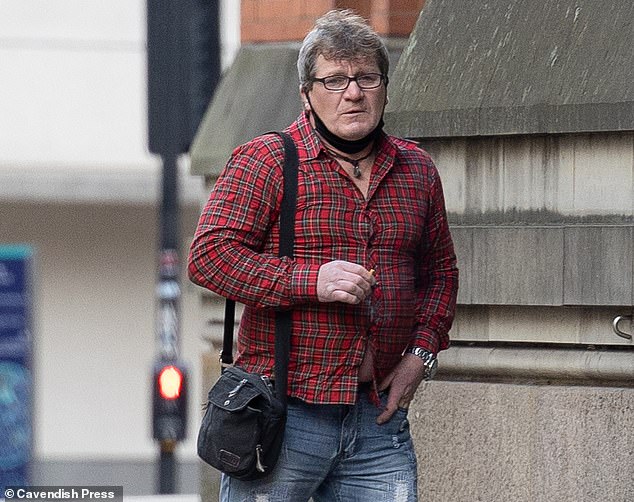 Pavel Jakes was discovered shooting at birds by a dogwalker as she walked through Springwater Park in Radcliffe, near Bury, in 2017. He admitted to possessing a firearm in a public place but avoided jail after a court heard it was his ‘pastime,’ in the Czech Republic

Minshull Street Crown Court heard the incident began at 10am on August 17 2017 after the dog walker spotted Jakes as she walked through the park towards a hill.

Justin Hayhoe, prosecuting, said: ‘She was confronted by this defendant who had initially been hidden from her view by the grass. He had been lying or crouching down at the time but he stood up and took the dog walker by surprise.

‘She immediately saw the defendant armed with what looked to her to be a rifle. Her dog then went over to the defendant who asked the dog’s name. She described the defendant as looking nervous as she spoke to him. He wore camouflaged trousers and jacket.

‘She carried on walking towards the exit, saw another woman entering the park and warned her of the defendant before contacting the police. She was concerned over the defendant’s presence in the public park with the rifle.

‘Officers, including dog patrols and a firearms unit arrived at the park around 10.25 a.m. They searched the park for the defendant and heard a gunshot which they thought was from a high-powered gas air rifle. They saw a number of birds begin to scatter and found the defendant. 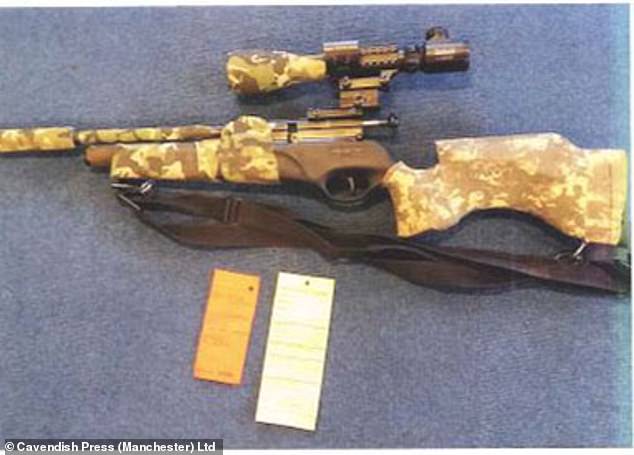 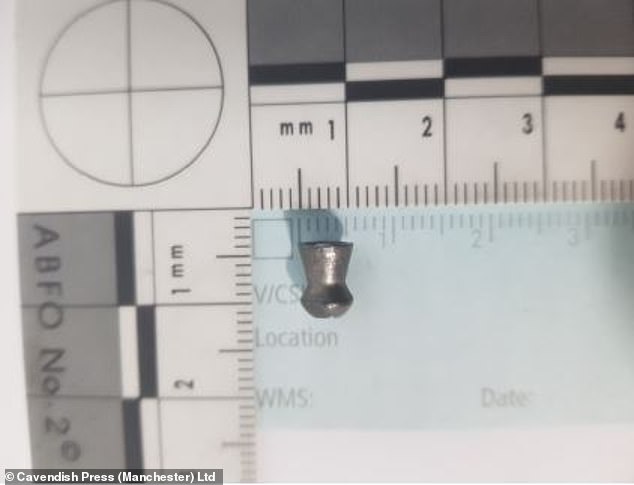 Jakes was carrying 74 four.22 calibre pellets when police searched him at the beauty spot 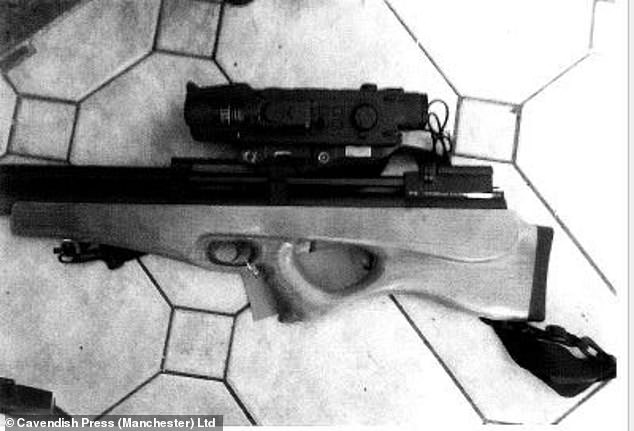 Officers found another air rifle at his home in Whitefield, which they found had the potential to be lethal

‘About 10 feet away an air rifle was located hidden in some brambles. The rifle had camouflage material wrapped around it, a telescopic sight and a sound moderator.

‘That was later examined and found not to be a firearm. The defendant was searched and was in possession of 74 four.22 calibre pellets to be used in that air rifle. He was also in possession of an extendable baton.

‘The defendant’s home was searched and a second air rifle was located inside the house. That air rifle was examined and found to be gas powered.

‘An examination of that air weapon found it was as such a ‘lethal weapon’ and subject to the restrictions of the Firearms Act.

‘The weapon was test fired and found to be in working order. The overall length of this rifle was 76..2 centimetres.

Jakes was interviewed with a solicitor and an interpreter but declined to answer any questions.

His lawyer, Michael Lee, said in mitigation: ‘Mr Jakes is a hardworking individual and fully committed to his work which is his life.

‘He has very little social life other than the hunting. It was his pastime and a pastime which he followed in his native Czech Republic and in that country it is less regulated there than it is in this country.

‘He has fallen foul of these regulations to a certain extent and lacked knowledge of the regulations.

‘Whilst we accept the items looked like professionally equipped weapons with sights and sound modifiers et cetera, there was a particular cultural difference in his home country. 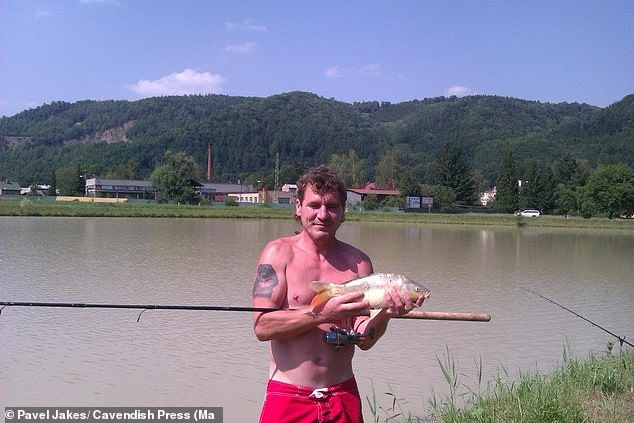 Jakes’ defence solicitor said he had ‘very little social life other than hunting,’ which he said was far less regulated in his native Czech Republic than in the UK

‘ He is of a nervous disposition and has explained what he was doing there and he was quite surprised to learn it was a public park.’

Sentencing Jakes, Judge Tina Landale said: ‘You were hunting birds in the undergrowth with a firearm and the dog walker had no idea that was your purpose and she was understandably very afraid.

‘One can imagine the scene – a man dressed in camouflage clothing and armed with a rifle also camouflaged emerging from the undergrowth in North Manchester in broad daylight. She acted incredibly responsibly and kept her wits about her and contacted the police.

‘The really serious feature about this case is if you had fired your gun as you did fire your gun, a member of the public enjoying that public access could have been injured. 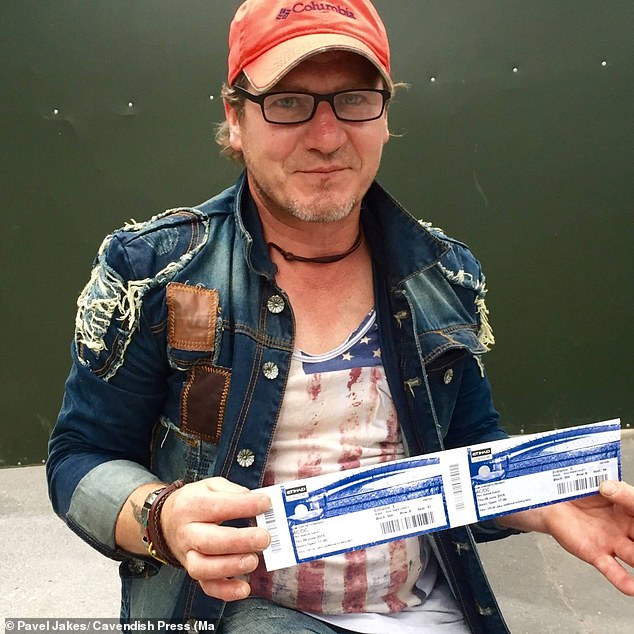 ‘Mercifully nobody was injured but the possibility is that might have happened.

‘However, this was a truly isolated incident and you have lived an entirely blameless life.

‘You are hardworking and contributed to the public through years of hard work and it said you are a low risk of reoffending and I accept you are generally remorseful and learnt a very hard lesson from these proceedings.’

The dog walker was awarded £200 out of public funds from her ‘public spirit and calmness’ during the incident.