Children with a runny nose DON'T have Covid-19, expert warns

If you’ve got a runny nose you DON’T have Covid-19: Top expert says fatigue is most common symptom for children and Matt Hancock urges parents not to confuse colds with coronavirus ‘as 25,000 teachers forced to self-isolate because of swab shortage’

Children suffering from a runny nose ‘absolutely’ do not have coronavirus, a top expert has warned.

Professor Tim Spector, from King’s College London, told parents that the symptom, alongside congestion and sneezing, is a ‘sure sign’ they have a cold and not the virus.

‘If you look at the risks of it being positive, we have 6,500 new cases a day which, on a countrywide basis, is still very small,’ he told Radio 4’s Today programme. ‘So most people’s chances are that they don’t have Covid.’

Professor Spector works on the Coronavirus Symptom Study app which asks its 4million users to report when they are suffering symptoms and whether they then tested positive for Covid-19.

The data shows the most common symptom in children of school age is fatigue, affecting 55 per cent. This is followed by a headache (53 per cent) and fever (49 per cent).

By comparison, the most common symptoms in adults are fatigue (87 per cent), headache (72 per cent) and a loss of smell (60 per cent). Neither children or adults frequently report a runny nose.

The team spearheaded efforts to get loss of taste and smell registered as a symptom of the virus in the UK, after reports to the app revealed it was a sign of the virus. But their pool of data means they can also identify what symptoms mean someone does not have coronavirus.

Matt Hancock has also warned parents not to get a Covid-19 test for children suffering from a case of the sniffles, which indicates a common cold and a ‘normal’ illness.

It came amid a testing crisis causing up to 25,000 teachers in England off work to self isoalte with coronavirus symptoms, unable to find out if they are positive for the disease. 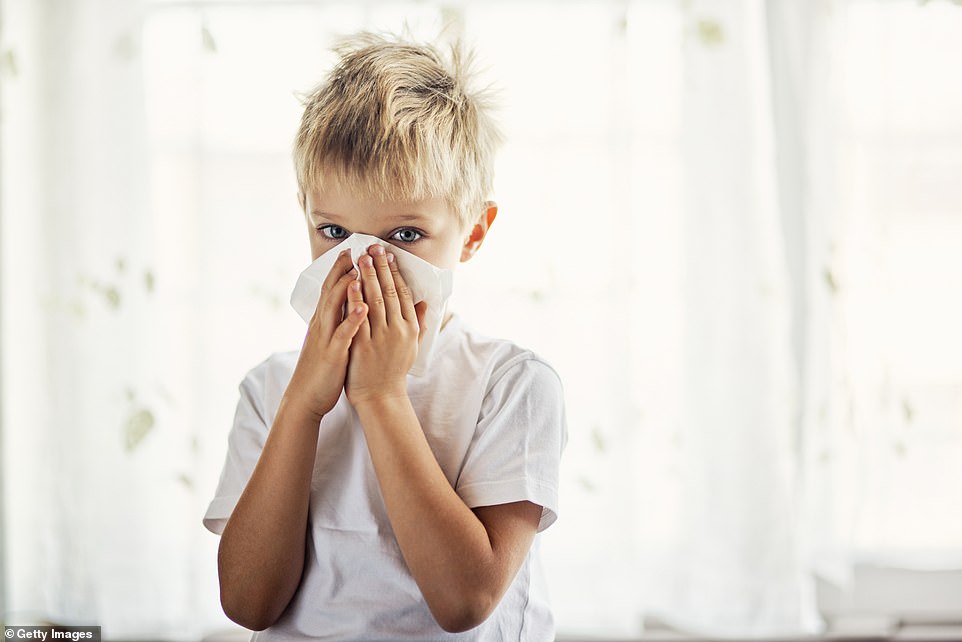 Children suffering from a runny nose ‘absolutely’ do not have coronavirus – but may instead be suffering from the common cold, a top expert has warned (stock) 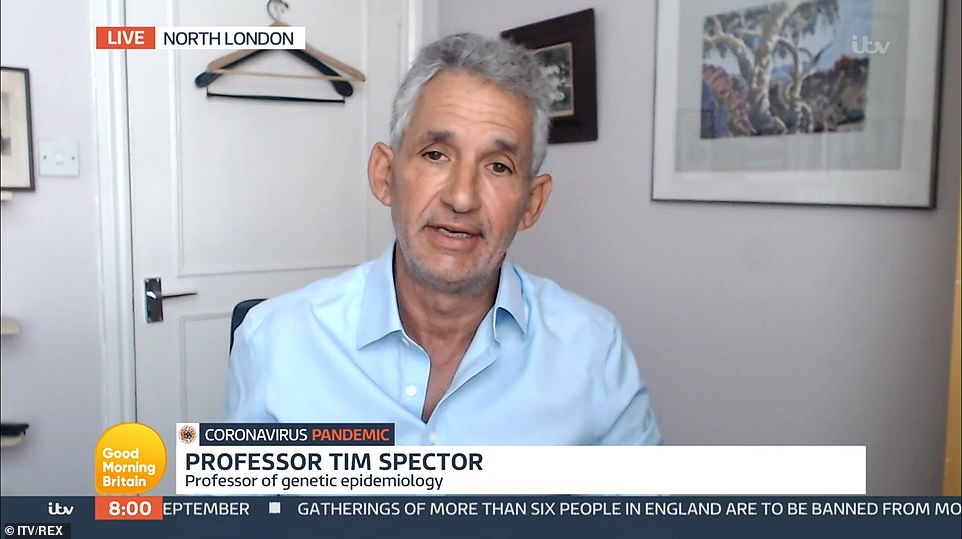 Professor Tim Spector, from King’s College London, said his research including data from 4million people had revealed a runny nose was a ‘sure’ sign someone didn’t have Covid-19

The number of teachers in home quaratine is the equivalent of five per cent of the entire teaching workforce in state-run schools in England (500,000).

Similarly, a survey of 6,700 teachers in England by the Teacher Tapp app found that four per cent were isolating for Covid-related reasons on Tuesday, with primary teachers and staff in the Midlands or the north-west of England more likely to be isolating.

WHAT ARE THE SYMPTOS OF COVID-19?

The main symptoms of coronavirus listed by the NHS are:

Significant problems in the testing system has meant teachers and pupils alike are having to quarantine at home without knowing for certain if they have the coronavirus. They either can’t get a test locally or are taking time off while waiting the results, which can take several days to return.

One of the reasons tests stalling are because the ‘worried well’ are getting swabbed when they do not have symptoms, the Government claims, alongside website glitches, overwhlemed laboratorie and a genuine increase in demand.

The Health Secretary Matt Hancock claimed a quarter of people wanting tests do not have symptoms, which has not been proven with eveidence. Mr Hancock reported whole school year groups being advised to get tested just in case they have been infected.

Amid anxieties over children catching the coronavirus two weeks after schools re-opened, Professor Spector reminded the public that a runny nose is not a symptom.

He said there is a difference in the symptoms suffered between age groups – and that the standard high temperature, continuous cough and loss of taste and smell may not appear for those aged below 18 and above 65.

‘You don’t see (loss of taste and smell) in older people and in kids at all,’ he said.

He said the standard symptoms of a high temperature, continuous cough and loss of sense of taste and smell are accurate for those aged 18 to 65, but they may vary for people who are older or younger.

‘By all means keep your kids at home (if they have symptoms) but don’t rush around the country trying to get a test for something that’s highly likely to be a cold and not Covid,’ he said.

Matt Hancock has also warned parents that a runny nose indicates a common cold, and not coronavirus.

He told The Times: ‘When schools go back, children often do get a cold – a normal illness if you like.

‘Obviously, that is contributing to the increase in demand, as well as people who are not eligible coming forward.’

In Scotland, Nicola Sturgeon has told parents not to ask for a test if their child has a blocked nose. And in England MPs have said nurseries are sending children home who have any symptom of the common cold.

The Coronavirus Symptom Study app predicts there are currently around 6,500 new cases of the disease in the UK each day, based on reports from its 4million users.

The official tally suggests there are around 3,000 new cases a day. Yesterday 3,991 new cases of the disease were recorded.

Anthony Costello, a SAGE scientist, has claimed on Twitter that the government thinks infections could be in excess of 38,000-a-day, far above the official tally.

Government testing stands at around 200,000-a-day and is currently dealing with a backlog of swabs, slowing down their ability to detect new cases quickly.

Around 90 per cent of all swabs tested are coming back negative, suggesting many people are rushing to get a test when they don’t need one.

This has placed additional strain on the testing system, which is already struggling to cope under spiralling demand. 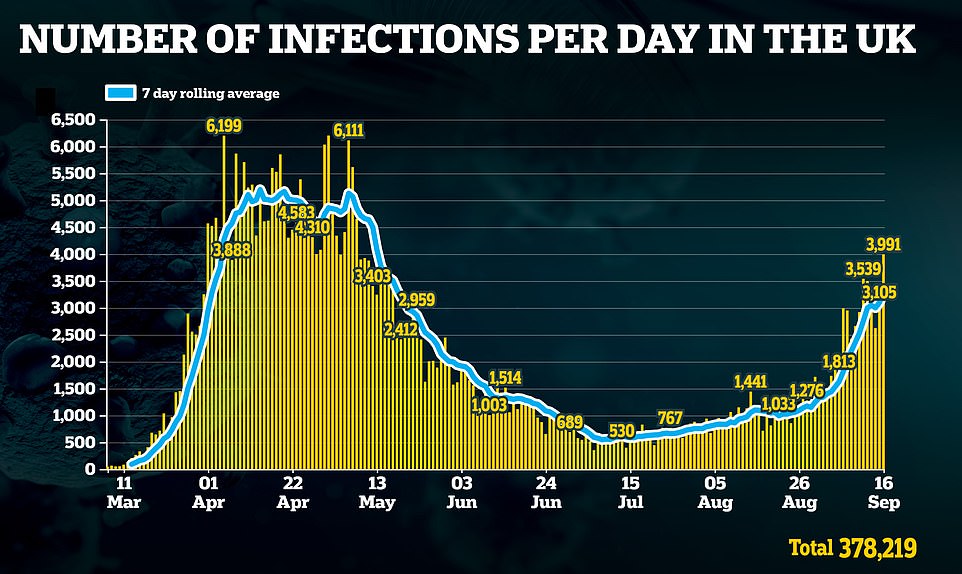 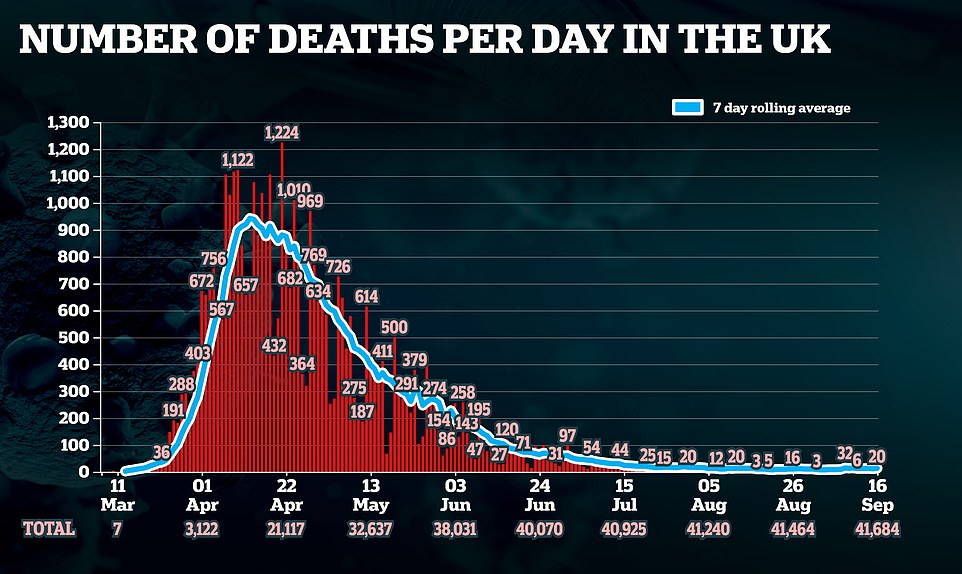 Education leaders have warned that secondary schools could be forced to go part-time if the testing crisis continues.

Geoff Barton, general secretary of the Association of School and College Leaders (ASCL) said that teachers may be forced to put in a rota system, where only some year groups are coming in, if cases begin to rise in their local area.

Heath teachers said this could work on a two weeks on, two weeks off basis for each year group, throwing plans for parents to return to their offices into chaos.

Mr Barton warned the Telegraph the current system is ‘unravelling’ with thousands of pupils and teachers having to stay home while they wait for test results.

Hundreds of schools have already seen whole classes sent home amid fears a child has coronavirus, and following positive tests in school premises.

Matt Hancock said last week that he had heard cases of whole schools trying to get tests and people asking for swabs because they were going on holiday, which had overloaded the system.

It comes amid reports that schools are drawing up plans to go part-time if the testing fiasco continues.

Education leaders have warned the Prime Minister that schools up and down the country are struggling to get a test, reports the Telegraph, and that secondaries will have to move to a rota system if cases are rising in their local area.

Geoff Barton, general secretary of the Association of School and College Leaders (ASCL), told the publication that teachers may be forced into a rota system sooner rather than later if schools can’t access tests.

The Health Secretary announced this week that the offering of tests would be ‘prioritised’ with hospital patients and health workers pushed to the front of the queue, despite boasting that they would be able to carry out 10million swabs a day.

The measure has resulted in angry reprimands from education leaders, warning that they also need test results quickly.

The NHS advises people only to get a coronavirus test if they are suffering from a high temperature, continuous cough or loss of sense of taste and smell.

But the government has claimed that people are getting tests despite not having these symptoms as a ‘wave of fear’ over all respiratory tract infections ripples across the country.

England’s ten coronavirus hotspots were left unable to access coronavirus tests after the authorities struggled to handle a massive surge in demand for swabs.

Officials have claimed that problems lie with the lab capacity which is acting as a ‘bottleneck’, while there is still adequate space to get swabbed at testing centres.