A suspect in an alleged $35 million Ponzi scheme briefly evaded arrest Monday by using an underwater “sea scooter” to pull himself into California’s largest reservoir for about 25 minutes before he eventually reemerged and was placed under arrest by the FBI.

Matthew Piercey, 44, of Palo Cedro, allegedly led FBI agents on a vehicle chase through residential neighborhoods and then onto the highway before abandoning his pickup truck, grabbing an underwater submersible device and swimming into the frigid waters of Lake Shasta, north of Redding, according to the U.S. Attorney's Office for the Eastern District of California.

“Piercey spent some time out of sight underwater where law enforcement could only see bubbles,” according to court documents describing Piercey as a flight risk. 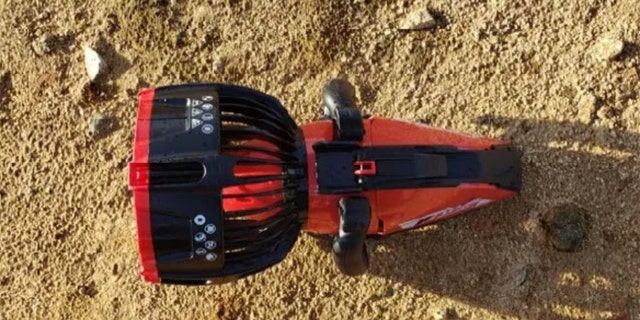 (U.S. Attorney’s Office for the Eastern District of California)

Piercey used a Yamaha 350Li Seascooter to remain submerged in the lake for about 25 minutes before law enforcement eventually placed him under arrest. The device can tow divers beneath the surface at speeds up to 3.7mph, allowing them to conserve energy, according to the product’s website.

Law enforcement arranged for an ambulance so that medical personnel could evaluate him after his time in the lake. Authorities also obtained dry clothes from Piercey’s wife for him to change into before departing with him for Sacramento.

Piercey, the creator of investment companies Family Wealth Legacy and Zolla, was arrested Monday after a grand jury returned an indictment on Nov. 12, charging him with wire fraud, mail fraud, money laundering, and witness tampering in connection to a $35 million fraud scheme, U.S. Attorney McGregor W. Scott announced. The case was investigated by the FBI.

His associate, Kenneth Winton, 67, of Oroville, was charged separately by criminal information with conspiracy to commit wire fraud.

From about July 2015 through August 2020, Piercey carried out an investment fraud scheme that raised a total of approximately $35 million in investor funds, according to court documents.

Federal prosecutors said Piercey used Family Wealth Legacy and Zolla “to solicit funds from investors using a variety of false and misleading statements, including about trading algorithms, the success of the companies’ investment strategies, and the liquidity of investments.”

Piercey solicited investor money for an “Upvesting Fund” that allegedly was an algorithmic trading fund with a history of success, but he admitted privately to an associate that there was no Upvesting Fund, according to court documents. He first recruited Winton as an investor, then to assist with raising investor funds, and ultimately to take on management responsibilities at Zolla.

From 2018 to 2020, Winton allegedly conspired with Piercey and made various false and misleading statements to investors, including about the success of Zolla’s investment strategies, the reasons for delays in payment to investors, and the current location, value, and nature of Zolla investments.

Piercey and Winton allegedly used some investor money to make payments to other investors in a “Ponzi scheme.” In total, they paid back approximately $8.8 million to investors. They used other investor money for various business and personal expenses, including two residential properties and a houseboat. Few, if any, liquid assets remain to repay investors, according to the Justice Department.

Court documents allege Piercey also tampered with multiple witnesses by discouraging them from responding to grand jury subpoenas related to the investigation.