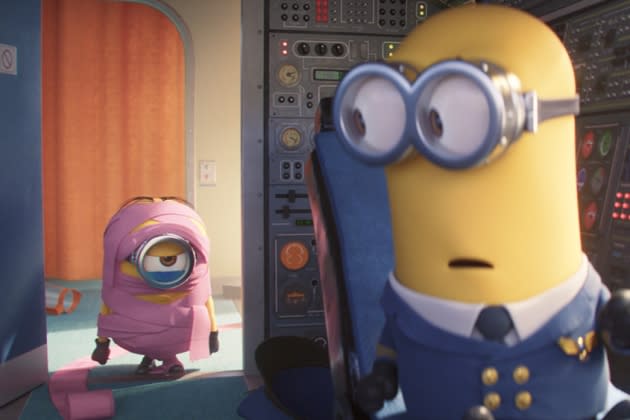 It’s official — the Minions are back.

Universal and Illumination’s “Minions: The Rise of Gru” is setting off fireworks at the Fourth of July box office, projecting a $129.2 million opening over the four-day holiday weekend from 4,400 locations. On a three-day scale, the “Despicable Me” prequel looks to gross $109.4 million — that number would mark the highest domestic opening for an animated film since 2019’s “Frozen 2,” representing a huge bounce back for family-friendly fare after lockdowns due to the COVID-19 pandemic.

The Illumination production took off to an explosive $10.75 million in Thursday previews, initially setting projections for the long holiday weekend in the range of $65 million to $75 million. “The Rise of Gru” is now nearly doubling those estimates.

Should the “Minions” sequel fulfill its current projections, the film will shatter the Fourth of July weekend box office record. Paramount’s “Transformers: Dark of the Moon” currently stands as the highest grossing earner for an Independence Day four-day frame — the 2011 blockbuster grossed $115.9 million over the period.

Additionally, “The Rise of Gru” has a chance to become Illumination’s top domestic opener ever. The film’s predecessor, 2015’s “Minions,” currently stands as the animation studio’s best, with a $115.7 million three-day opening. The sequel could break beyond that figure if it continues to grow over the weekend. In other words, the Minions may be bigger than ever.

“Minions: The Rise of Gru” serves as both a sequel to 2015’s “Minions” and a prequel to “Despicable Me.” The film follows a 12-year-old Gru (voiced by Steve Carell) as he grows up in awe of a team of supervillains. Hankering to join them, Gru asks his sentient, overall-sporting pill creatures to sit on the sidelines for the job interview. Of course, things don’t quite work out as Gru expects them to. The voice cast also includes Pierre Coffin, Alan Arkin, Taraji P. Henson, Jean-Claude Van Damme, Lucy Lawless, Dolph Lundgren and Danny Trejo.

With little competition for kid-friendly films on the immediate horizon, Universal hopes that “Minions: The Rise of Gru” enjoys a long run at the summer box office. Word-of-mouth should be strong, as audiences bestowed the film an “A” rating through research firm Cinema Score, indicating enthusiastic approval.

Critics have generally met “The Rise of Gru” amicably too, with the film scoring a 70% aggregate approval rating from top critics on Rotten Tomatoes. Variety chief film critic Peter Debruge quite enjoyed what he called a “delightfully silly sequel,” writing: “Six months into 2022, it’s the funniest film Hollywood has produced thus far. Audiences know what to expect, and Illumination delivers, offering another feel-good dose of bad behavior.”

In the now weekly segment of “Goodness gracious, ‘Top Gun: Maverick’ is only dropping how much?,’ the Tom Cruise sequel is projecting a measly 9% fall from its outing last weekend, drawing a $26.8 million three-day haul. The numbers shouldn’t be surprising after more than a month of box office dominance, especially considering the star-spangled sequel essentially advertises itself as the ultimate movie to go see on Fourth of July weekend, though they continue to impress.

“Maverick,” which was co-financed and co-produced by Skydance, should take silver at the Fourth of July weekend box office. The film will expand its domestic gross to $572 million through Monday, continuing to push the ceiling higher on its run as 2022’s highest grossing domestic release.

“Elvis” is headed for third place. The Warner Bros. released added $5.3 million to its domestic gross on Friday, dropping a moderate 58% from its opening day last weekend. The film is expected to push its total North American gross past $70 million through the holiday weekend.

With a production budget of $85 million, “Elvis” has a ways to go to land comfortably in the black. However, the film has still managed to put together an impressive first ten days for a release aimed squarely at adult audiences without ties to any franchise.

Universal’s “Jurassic World Dominion” is eyeing a fourth place finish, dropping a modest 39% from its outing last weekend. Though the film is billed as the finale to the “Jurassic” franchise, “Dominion” should expand its domestic haul to $336 million through Monday, indicating that there’s still plenty of gas in the tank for the dinosaur-centric property.

Fifth place should go to Universal as well, with the Blumhouse production “The Black Phone” set to earn $11.9 million over the three-day frame. That’s only a 50% drop-off from its opening last weekend, which is a comparatively strong hold for the horror genre. The Scott Derrickson-directed feature only carries an $18 million production. With the film set to expand its domestic haul to $50 million through Monday, Universal and Blumhouse should be glowing at the turnaround.

Beyond the top five, Disney’s “Lightyear” is facing the heat from “Minions: The Rise of Gru” drawing in family audiences. The Pixar production added $2 million to its domestic haul Friday, dropping 64% from the previous week. The “Toy Story” spinoff has been one of Pixar’s slowest films to push past a $100 million domestic gross and has yet to match the $120 million opening weekend figure of “Toy Story 4” in 2019.

In terms of previous Pixar productions, “Lightyear” is on track to land in the neighborhood of the studio’s lowest grossing domestic earners. The film has only surpassed the pandemic-impacted $61.5 million haul of 2020’s “Onward.” Now, it looks to grow beyond “The Good Dinosaur” ($123 million), “Cars 3” ($152 million), “A Bug’s Life” ($162 million) and, if the box office legs prove stronger than anticipated, “Cars 2” ($191 million) and the first “Toy Story” ($192 million).

“Mr. Malcolm’s List,” a regency era romantic drama, isn’t making much of an impression in its domestic debut. The film is projected to earn $1.03 million over the four-day holiday frame from 1,384 locations, marking a meager $741 per theater. Bleecker Street is handling North American distribution.