Bolsonaro tells Brazil not to deal with pandemic 'like f*gs'

Brazil’s president Jair Bolsonaro came under fire on Tuesday for telling people not to deal with Covid-19 like ‘a country of f*gs’, in his latest controversial outburst about the pandemic.

Bolsonaro used the offensive term for gay people while complaining that ‘all anyone talks about these days is the pandemic… we need to stop that’.

‘I regret the deaths. I really do. But we’re all going to die someday. There’s no use fleeing reality. We have to stop being a country of f*gs… we have to face up to it and fight. I hate this f****t stuff,’ he said in a speech at the presidential palace.

Bolsonaro, who has repeatedly downplayed the virus despite the 5.7million infections and 163,000 deaths which it has caused in Brazil, also caused a separate row by gloating over the suspension of Chinese vaccine trials in Brazil. 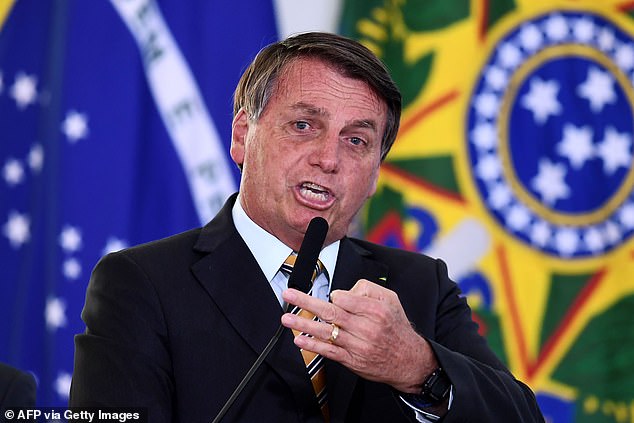 Critics of Bolsonaro fear that the decision was motivated by political hostility rather than science, but it is unclear when or if the tests will be allowed to continue.

Bolsonaro made the ‘f*g’ remarks during a meandering speech on Tuesday, supposedly about tourism, in which he also appeared to threaten Joe Biden.

Bolsonaro, a supporter of Donald Trump to whom he is often compared, is among the few world leaders who have not acknowledged Biden’s US election win.

Biden has irked Bolsonaro by urging his administration to protect the Amazon rainforest, and warned in a debate that it could face ‘economic consequences’.

‘Recently, a big-shot presidential candidate said if I didn’t put out the wildfires in the Amazon he would impose trade sanctions on Brazil,’ Bolsonaro said on Tuesday.

‘How do you deal with that kind of thing? Diplomacy alone doesn’t work…. You have to have gunpowder. You don’t have to use it. But they have to know you have it.’

His comments triggered an immediate outcry from critics.

‘Between ‘gunpowder’ and ‘f*gs,’ we have more than 160,000 dead in the country,’ tweeted the speaker of the lower house of Congress, Rodrigo Maia.

‘Our solidarity to all the friends and family of victims of Covid-19.’

Brazil’s death toll is the second-highest in the world after the United States, and its infection count is the third-highest after the US and India. 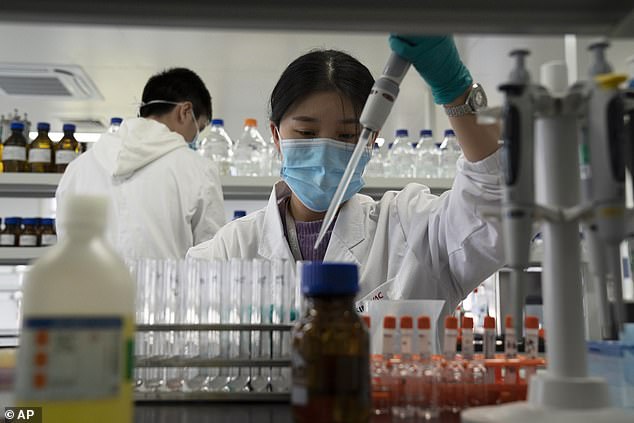 Bolsonaro caused a separate row by gloating about the suspension of trials for the Chinese-developed CoronaVac vaccine (pictured, the vaccine in development at a lab in Beijing)

Bolsonaro has previously condemned the ‘hysteria’ around Covid-19, compared the virus to a ‘little flu’ and claimed that Brazilians’ immune systems were so strong they could swim in raw sewage and ‘not catch a thing.’

Asked on one occasion about the high death toll, Bolsonaro said: ‘So what? I’m sorry, but what do you want me to do?’

The president has frequently mingled with crowds in defiance of social distancing rules and sometimes refused to wear a mask.

He has also seen two health ministers resign during the pandemic, and like Trump has touted the unproven anti-malaria drug hydroxychloroquine as a treatment.

In July, Bolsonaro himself tested positive for the disease, but unlike Trump or Boris Johnson he rode out the illness at home without needing hospital treatment.

The 65-year-old former army captain had previously predicted that the virus would be nothing more than a ‘little flu’ if he were infected with it.

That same month, Bolsonaro declared that ‘lockdown kills’ and added that curfew measures had ‘suffocated’ the country’s economy.

‘Without salaries and jobs, people die,’ he said referring to restrictions imposed against his will by some regional leaders in Brazil.