Belarus detains journalists ahead of anti-gov't protest in Minsk

Interior ministry says about 20 journalists driven to police station to check if they had valid accreditation. 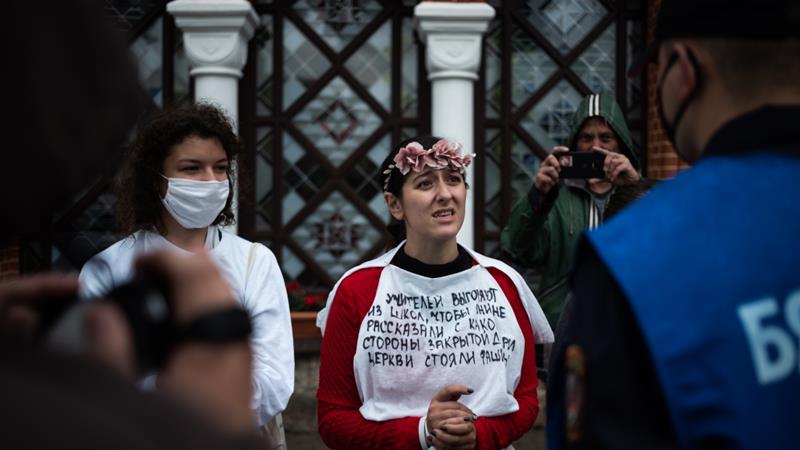 Belarusian police detained about 20 journalists planning to cover a protest in central Minsk on Thursday and confiscated their telephones and identity documents, Reuters news agency said.

The interior ministry later on Thursday said the journalists had been driven to a police station for officers to check they had valid accreditation allowing them to work as journalists.

It said all those with official accreditation would be released and denied the journalists had been detained.

Belarus is facing its biggest political crisis since the breakup of the Soviet Union, with tens of thousands of demonstrators rejecting President Alexander Lukashenko’s victory in an August 9 vote his opponents say was rigged.

The journalists planned to cover a demonstration in which hundreds of anti-government protesters marched along central Minsk street on Thursday evening.

Amid unprecedented protests in Belarus, NATO chief Jens Stoltenberg on Thursday called on Russia not to meddle in the crisis after President Vladimir Putin promised military support for embattled Lukashenko.

“Belarus is a sovereign and independent state. And nobody, including Russia, should interfere there,” Stoltenberg on Thursday told Germany’s bestselling Bild daily, in comments translated from German.

The Belarusian opposition’s Coordination Council also expressed their dismay with Putin’s comments, saying it was unacceptable for Russia to have set up armed forces of any kind for use in Belarus.

The opposition council said in a statement it “regretted” the force had been set up at Lukashenko’s request and said it “violated international law”.

Putin earlier on Thursday said Kremlin had set up a police force to support Lukashenko at his request, although it would not be deployed unless unrest there spun out of control.

“We have of course certain obligations towards Belarus, and the question Lukashenko raised was whether we would provide the necessary help,” Putin told state television.

“I told him Russia would fulfil all its obligations. Alexander Grigorivich [Lukashenko] asked me to create a reserve police force and I have done that. But we agreed this would not be used unless the situation got out of control.”

The remarks were the strongest signal yet that Russia is prepared to use force if needed in Belarus.

Russia sees Belarus as a key bulwark against Western expansion and an important conduit for Russian energy exports.

The two countries have a union agreement envisaging close political, economic and military ties, and Lukashenko has relied on cheap Russian energy and other subsidies to keep Belarus’s Soviet-style economy afloat.

In an apparent jab at the West, which has condemned Lukashenko’s crackdown on protesters and urged him to launch a dialogue with the opposition, Putin accused unidentified foreign forces of trying to win political advantages from the turmoil in Belarus.

“They want to influence those processes and reach certain decisions, which they think conform with their political interests,” Putin said.

The European Union has rejected the results of the presidential election that gave Lukashenko 80 percent of the vote.

Despite the close cooperation, Russia-Belarus relations have often been strained by disputes.

Lukashenko has frequently played overtures to the West and accused Moscow of hatching plans to incorporate Belarus.

Belarusian authorities released the men shortly after the vote in a bid to mend ties with the Kremlin amid rising Western criticism.