Bar accused of homophobia after banning 'public displays of affection'

A formerly LGBT-friendly bar has been accused of homophobia after banning public displays of affection from gay couples that will disrupt its ‘straight clientele’.

It specified that any attempts to ‘deliberately provoke’ the policy will be classed as anti-social behaviour ‘aimed directly to disrupt our straight clientele’.

The bar was slammed for being ‘homophobic’ and accused of not treating LGBT customers the same as other patrons.

Despite not being an official gay bar, locals say Guys and Dolls is well-known for being friendly to the LGBT community – with patrons sharing their anger at the bar’s Facebook posts.

Kara Varetto, 24, a former customer, claims to have experienced the PDA rule first-hand, when they were told to stop kissing girlfriend, Gina Kinrade, 23, on a visit in 2017.

However, defiant owner Richard Wernham defended the PDA policy that bans ‘heated’ kissing and cuddling, claiming it is a ‘blanket rule’ for all that applies to both straight and gay customers.

Responding to comments pointing out its history, the bar wrote on its Facebook page: ‘Sadly some don’t understand that with equality comes, well equality.

‘We can no longer be a publicly gay place, only a safe and accommodating place for all. This is now the future, we all need to move on as equals, as is now the law which we fully embrace.’ 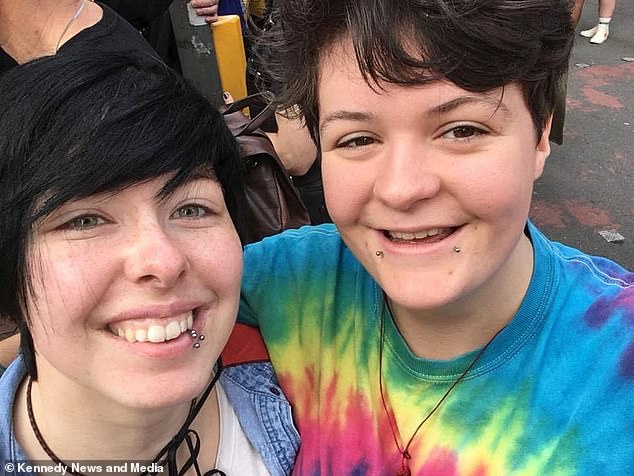 Kara Varetto (right), 24, a former customer, claims to have experienced the rule first-hand, when they were told to stop kissing girlfriend, Gina Kinrade, 23 (left), on a visit in 2017 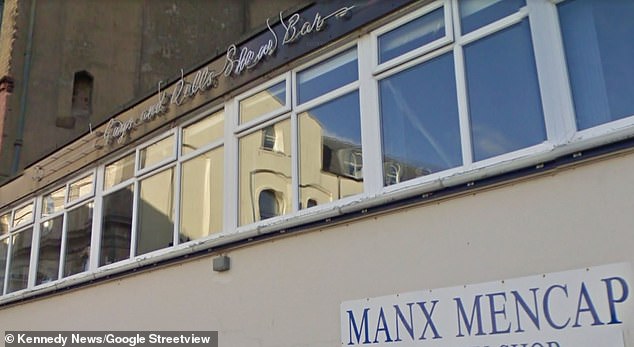 Guys and Dolls, in Douglas, Isle of Man, was accused of homophobia after banning public displays of affection from gay couples that will disrupt its ‘straight clientele’ 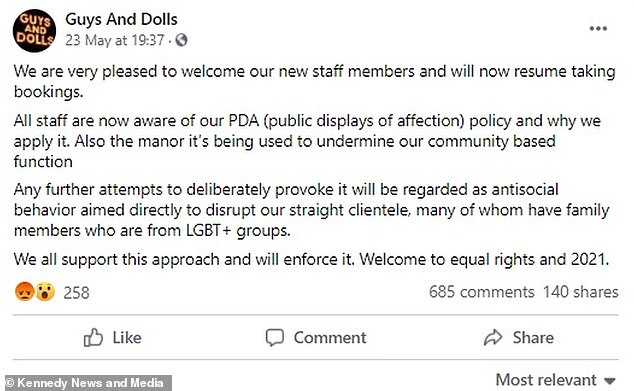 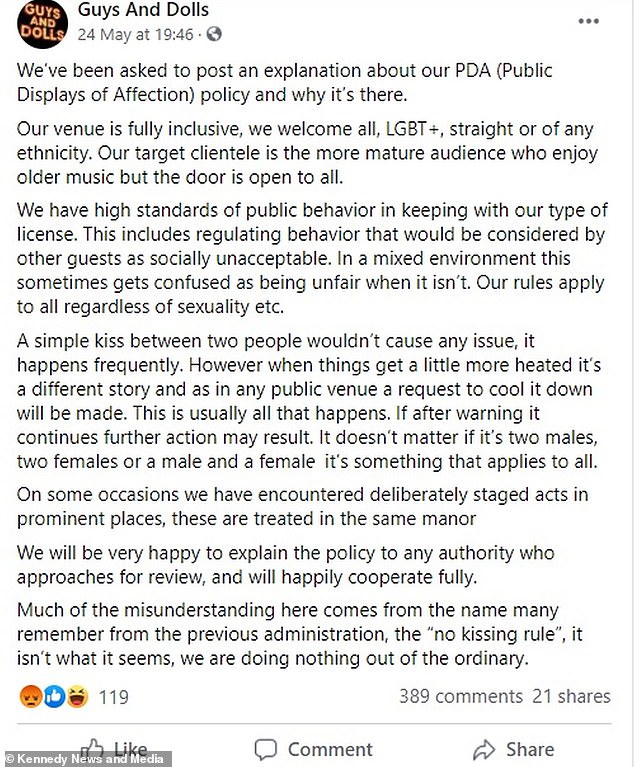 In a follow-up post the bar claimed they were ‘inclusive to all’ and clarified that any ‘socially unacceptable’ displays of affection – between anyone – would result in punters being kicked out.

The furore comes as the Isle of Man prepares to host its first Pride event this year.

The original Guys and Dolls Facebook post that triggered the outrage read: ‘We are very pleased to welcome our new staff members and will now resume taking bookings.

‘All staff are now aware of our PDA (public displays of affection) policy and why we apply it. Also the manor [sic] it’s being used to undermine our community based function.

‘Any further attempts to deliberately provoke it will be regarded as antisocial behavior aimed directly to disrupt our straight clientele, many of whom have family members who are from LGBT+ groups.

‘We all support this approach and will enforce it. Welcome to equal rights and 2021.’

After being flooded with hundreds of comments from angry social media users a second post was shared to the page.

It read: ‘We’ve been asked to post an explanation about our PDA (Public Displays of Affection) policy and why it’s there.

‘Our venue is fully inclusive, we welcome all, LGBT+, straight or of any ethnicity. Our target clientele is the more mature audience who enjoy older music but the door is open to all.

‘We have high standards of public behavior in keeping with our type of license.

‘This includes regulating behavior that would be considered by other guests as socially unacceptable.

‘In a mixed environment this sometimes gets confused as being unfair when it isn’t. Our rules apply to all regardless of sexuality etc.

‘A simple kiss between two people wouldn’t cause any issue, it happens frequently.

‘However when things get a little more heated it’s a different story and as in any public venue a request to cool it down will be made. This is usually all that happens. 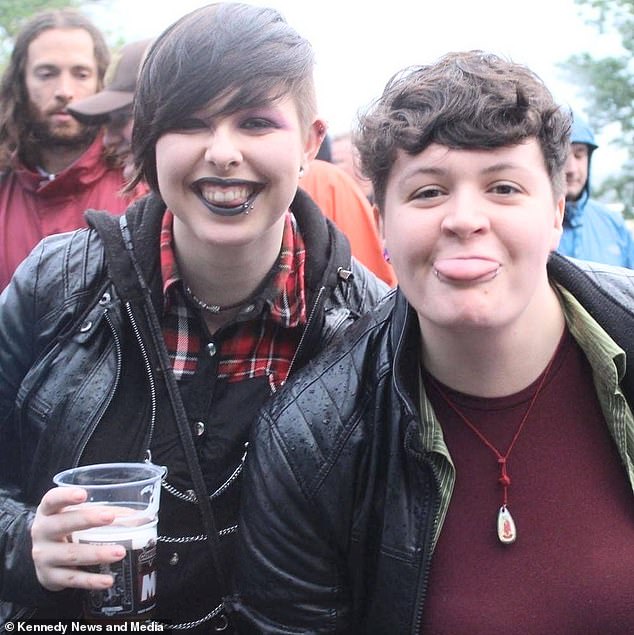 ‘If after warning it continues further action may result. It doesn’t matter if it’s two males, two females or a male and a female, it’s something that applies to all.

‘On some occasions we have encountered deliberately staged acts in prominent places, these are treated in the same manor [sic].

‘We will be very happy to explain the policy to any authority who approaches for review, and will happily cooperate fully.

‘Much of the misunderstanding here comes from the name many remember from the previous administration, the ‘no kissing rule’, it isn’t what it seems, we are doing nothing out of the ordinary.’

Explaining how they were forced to stop kissing their girlfriend after visiting the bar in 2017, Kara said: ‘It happened four years ago at a pride event me and my girlfriend had gone to. We were unaware of this PDA rule.

‘I was just about to go to the bar and I kissed my partner briefly. One of the staff members very snappily said ‘stop that’. We were both taken aback and we giggled, but then we realised she was being serious.

‘We went up to her to get an explanation, and she told us that we weren’t allowed to kiss on the premises, as it was their PDA rule.

‘I thought it was strange that they’d have their rule in place on a Pride night, isn’t that what Pride is about? She just scowled at us basically, and I remember us finishing our drinks and leaving quite quickly after that.

‘I would totally understand if she had said ‘I’m really sorry, but we have this PDA rule’, but the fact she started it with ‘stop that’ made me feel like I was being spoken to by a teacher.

‘When she said that, I remember looking around and seeing lots of couples kissing.

‘I have a lot of friends who are straight and as far as I’m aware, they’ve never been chucked out of there for kissing.

‘I think the recent Facebook posts were very badly worded, and the way they’ve gone about enforcing this role comes across as very homophobic.

‘I don’t know where these ideas about gay couples kissing to provoke straight people have come from, but it’s just mad.

‘There’s a lot of good that’s going on here, and it’s a shame that this has cast a really bad light on the Isle of Man.

‘It’s been known for being quite backwards, but actually a lot of progress has been happening, especially in the last five to ten years.

‘The island took a while to give same-sex couples their rights, but I’ve absolutely noticed a huge fast-pedalling. You can see some people from the older generation who are falling behind a little bit.

Mr Wernham hit back: ‘We’re an all-inclusive venue, I’ve been running it for ten years.

‘I’ve been accused of being homophobic, which is absolutely ridiculous, there’s not a homophobic bone in my body.

‘We have a policy which dates before I was involved, initially called a ‘no-kissing’ rule. I changed its name to make it more understandable.

‘It’s the same policy as you’d find in any hotel bar across the UK. Only difference is that it’s blanket – it applies to gay people, straight people, lesbians. It doesn’t matter.

‘We don’t throw people out for it, unless they’re repeat offenders and it’s a deliberate act.

‘This [Facebook comments] is a malicious attack and seems highly orchestrated.

‘We are an all-inclusive venue who welcomes all equally and not a gay bar as some infer.

‘I open it to the public for free on a Saturday night only, all of us have full time occupations during the week.

‘Our PDA policy has been in place for 20 years or so in one form or another, it’s certainly not new and is very well known but disliked by some.

‘It isn’t in any way discriminatory, it applies to all and is completely legal. It’s about keeping standards of behavior high and not about spoiling people’s fun.

‘Sadly people see this as somehow homophobic which it certainly isn’t, we welcome all LGBT people as equals.

‘It’s awkward to comment further for now while the situation is being monitored but many of the claims made are false or not fully truthful.

‘Our license is well respected by the authorities for maintaining high standards and causing no trouble, I’d like to keep it that way.’

A representative for LGBT charity Isle of Pride said: ‘Recent Facebook comments from a local bar have demonstrated that while we may have come a long way on the journey to equality, there is still more work to do.

‘The ability to hold hands and kiss your partner in public is not restricted in law nor to being a specific gender or sexual orientation.’