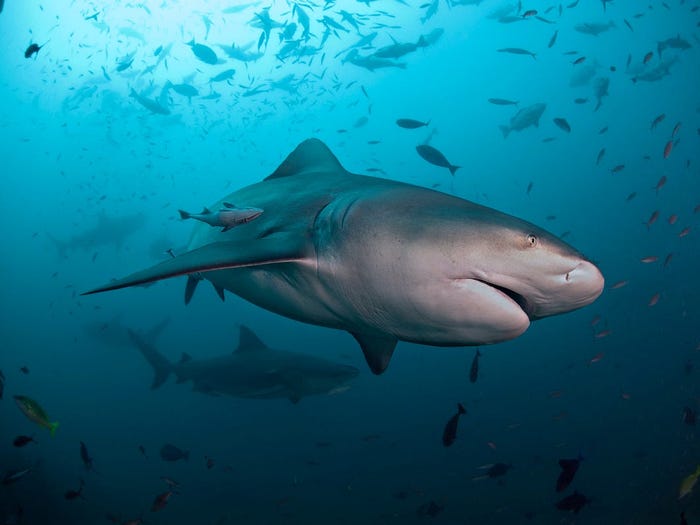 A pregnant woman jumped into the ocean to save her husband from a bull shark attack during a family vacation to the Florida Keys.

Margot Dukes-Eddy and her husband Andrew Charles Eddy, 30, had been on a private boat at Sombrero Reef with her family on Sunday when the incident took place, the Miami Herald reports.

Eddy had just entered the water to go snorkeling when the shark latched onto his shoulder.

Margot jumped in "without hesitation" after spotting the shark's dorsal fin and blood spilling into the water next to where her husband had gotten in.

She was able to pull him back onto the boat, where she luckily avoided injury herself, and Eddy was then brought back to shore and airlifted to Ryder Trauma Center in Miami.

Deputy Christopher Aguanno wrote in his report: "Dukes saw the shark's dorsal fin and then blood filling the water. Dukes, without hesitation, dove into the water and pulled Eddy to the safety of the boat," as per the Miami Herald.

Several other people were snorkeling in the water at the time, he added.

Eddy's injury was said to be "severe" in a Facebook post from the Monroe County Sheriff's Office, which added that witnesses in the area had reported seeing a bull shark earlier in the day measuring somewhere between 8 to 10 feet.

It added that Sheriff Rick Ramsay said: "This was a very rare medical crisis for the Florida Keys, but everyone came together — including those witnesses on the boat to 911 Communicators to all our emergency responders — in order to ensure this victim received life-saving care."

Bull sharks may be more dangerous to humans than any other shark. They reside in shallow waters, are aggressive, and can mistake humans for larger prey. Adults are up to 11 feet long and weigh 300 pounds.

It's not the first time someone has come to their partner's rescue during a shark attack in recent months.

Last month, an Australian man saved his wife from a great white shark attack by jumping off his surfboard and repeatedly punching it. The shark sunk its teeth into Chantelle Doyle, 35, on her right leg before her husband leaped on its back to save her.

The attack, which took place at Shelly Beach in Port Macquarie, southeastern Australia, was the third shark attack on New South Wales' northern coast in the space of two months.