The number of people on a Norwegian cruise ship who have tested positive for the coronavirus has now reached 53.

Following the outbreak on the MS Roald Amundsen, the ship’s owner halted all cruises on Monday and Norway closed its ports to cruise ships for two weeks.

The Norwegian Institute of Public Health said that during its two journeys last month, a total of 37 crew members and 16 passengers have tested positive. The passengers all registered as living in Norway. 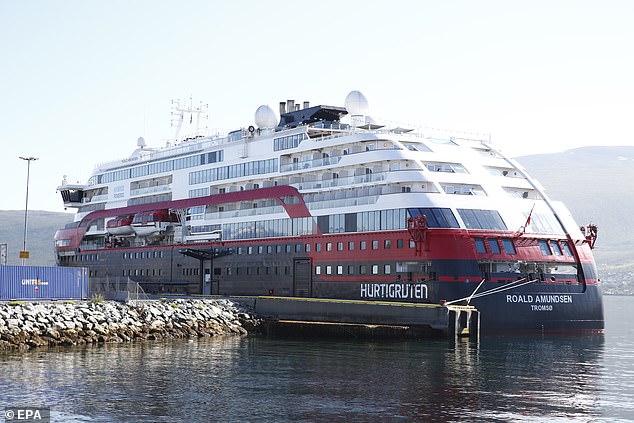 The Hurtigruten cruise ship MS Roald Amundsen moored in the Breivika harbour, in Tromso, northern Norway, on board which 53 people have tested positive for coronavirus

‘The preliminary results now show that there are a total of 53 people with confirmed infection on these two voyages; 37 among the crew and 16 passengers,’ the Norwegian Institute of Public Health said.

The cruise liner often acts like a local ferry, traveling from port to port along Norway’s west coast. Some passengers disembarked along the route and authorities fear they may have spread the virus to local communities.

In the Arctic harbor of Bodoe, the crew and passengers on the cruise ship Seadream 1 all tested negative for the virus. The tests were made ‘in an abundance of caution,’ according to Norway-based company that owns the ship, SeaDream Yacht Club.

The ship was put in quarantine after a person from Denmark tested positive on Tuesday upon returning home. The vessel arrived in Bodoe early Wednesday. 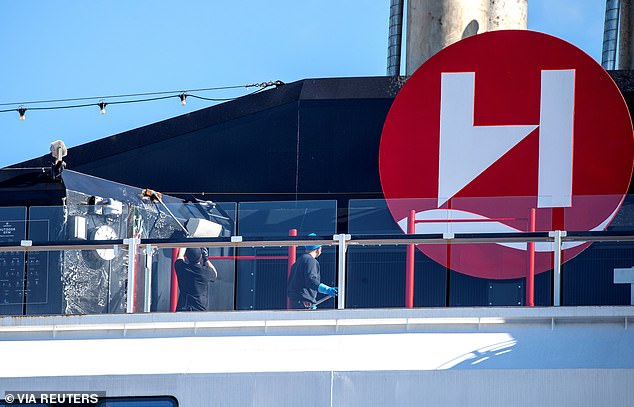 Workers re seen cleaning the MS Roald Amundsen, operated by Norway’s Hurtigruten line, after an outbreak of Covid-19 on board the ship

Norway will on Saturday reimpose a 10-day quarantine for all travellers from France, Switzerland and the Czech Republic, due to the rising number of coronavirus cases in those countries, its public health institute said on Thursday.

Norway will also reimpose quarantine for people travelling from Monaco and from certain regions in neighbouring Sweden, while lifting quarantine for other regions.

The Nordic country, which is not a member of the European Union but belongs to the passport-free Schengen travel zone, had some of the strictest travel restrictions in Europe in the early phase of the pandemic before gradually lifting them from June.

Other countries in Europe are considering what measures, if any, to impose to prevent a new wave of infections. 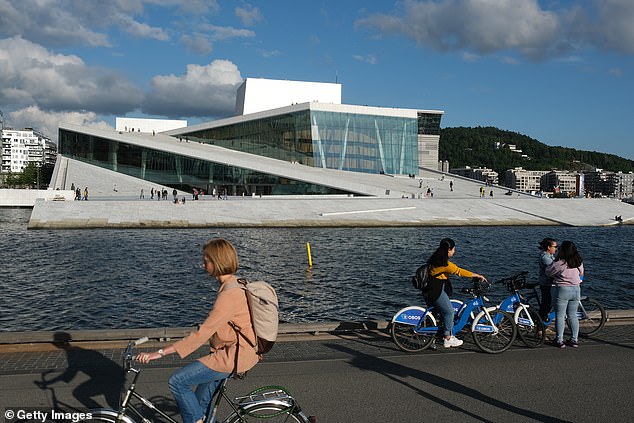 Norway will on Saturday reimpose a 10-day quarantine for all travellers from France, Switzerland and the Czech Republic. Above, people relax outside the Oslo Opera House amid the coronavirus pandemic

Germany announced on Thursday mandatory tests for travellers returning from high-risk regions after new coronavirus cases breached the 1,000-a-day threshold for the first time since May.

Norwegian authorities are also discussing whether to update guidelines on the wearing of face masks in crowded spaces.

Norway and other Nordic countries, unlike many other European countries, are for now not recommending people wear them in public spaces, but authorities have said they are reviewing their advice in the wake of rising cases in Europe.

The country of 5.4 million inhabitants has seen an uptick in the number of COVID-19 infections with 9,409 cases reported as of Thursday, up 12 cases from the day before. The total number of deaths was unchanged at 256.