Roman Protasevich, 26, was held after his flight from Athens was rerouted to Minsk on Sunday. Foreign Secretary Dominic Raab described the incident as a “shocking assault on aviation and international law”, representing a “danger to civilian flights everywhere”. He added: “To ensure the safety of air passengers, I’ve also worked with the Transport Secretary to issue a notice to all UK airlines to cease flights of Belarusian airspace and to suspend the operating permit on the Belarusian airline Belavia with immediate effect. As a precautionary measure, the UK Civil Aviation Authority will be instructed not to issue any further ad hoc permits to any other carriers flying between the UK and Belarus.” 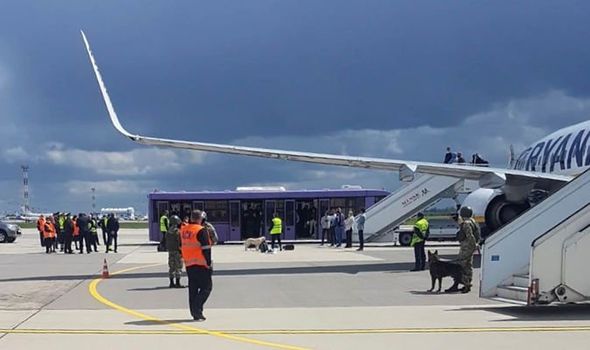 Mr Raab said further sanctions are being considered, including the suspension of energy pipelines in Belarus.

The country’s ambassador in London has also been summoned for talks.

European leaders and the US have also condemned Belarus President Alexander Lukashenko’s regime. The Belarus state media said that President Lukashenko personally ordered a fighter jet to intercept the aircraft, carrying more than 100 passengers, but claimed it was in relation to an alleged terror incident.

Ryanair boss Michael O’Leary said it was a “statesponsored hijacking” and claimed agents from Russia were also on board the flight.

He added: “It’s very frightening for the crew, for the passengers who were held under armed guard.”