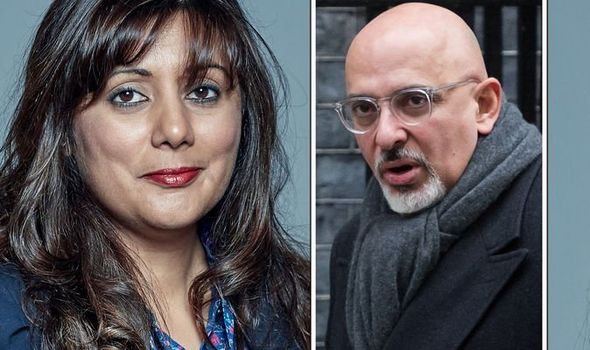 Nusrat Ghani, 49, worked in a post at the Department for Transport in 2018 but lost her ministerial position during a mini-reshuffle of Boris Johnson’s Government in February 2020. The Wealden MP claimed she was told by a whip that her “Muslimness was raised as an issue” at a Downing Street meeting.

Ms Ghani made the claim during an interview with the Sunday Times and also said during discussions about the reshuffle her status as a “Muslim woman… was making colleagues uncomfortable”.

She claimed: “At the post-reshuffle meeting with the whips I asked what the thinking was behind the decision to fire me and what the mood music was when my name was mentioned in No 10 concerning the reshuffle.

“I was told that at the reshuffle meeting in Downing Street ‘Muslimness’ was raised as an ‘issue’, that my ‘Muslim woman minister’ status was making colleagues uncomfortable and that there were concerns ‘that I wasn’t loyal to the party as I didn’t do enough to defend the party against Islamophobia allegations’.”

Within the Sunday Times, the Wealden MP is quoted as saying she “felt humiliated and powerless”.

She also claimed she had kept quiet after being warned that if she continued to raise the matter she would be “ostracised by colleagues” and her “career and reputation would be destroyed”.

On Saturday, the Chief Whip of the Conservative Party, Mark Spencer, said the MP was referring to him and said her claims were completely false.

He added that he considered her claims defamatory and denied ever using the words Ms Ghani had alleged.

Cabinet minister Nadhim Zahawi has said the allegation should be investigated.

In a tweet responding to the allegations, the Education Secretary said there was “no place for Islamophobia or any form of racism” in the Conservative Party.

He added the allegations had to be “investigated properly and racism routed out”.

Mr Zahawi also praised Ms Ghani and referred to her as a “brilliant parliamentarian”.

In 2015, Ms Ghani was the first Muslim woman to be elected a Tory MP.

She has been particularly outspoken on the topics of violent extremism, challenging the Taliban and ISIS, and on human rights abuses in China during her tenure.

Ms Ghani is also a committee member of the Covid Recovery Group, a group of Conservative MPs who opposed the December 2020 lockdown.

Ms Ghani also said since the incident she has considered whether she wanted to remain an MP, adding: “I will not pretend that this hasn’t shaken my faith in the party.”

She went on to add: “However, I will not let them win and force me out of politics.

“I have also been concerned at the consequences of this coming out for my security and that of my family, but I always knew there would be a time when I had to explain what happened to me.

“I also have an obligation to my party not to bury this incident.”

BBC political correspondent Damian Grammaticas claims that airing this dispute comes amid a time when tensions are rising in the Tory party and there are calls for Boris Johnson to resign.

Senior Government official Sue Gray is expected to reveal the results of her investigation into Covid rule-breaking this week, according to reports.

Downing Street is said to be nervous over the findings after Ms Gray reportedly found an email warning the PM’s private secretary, Martin Reynolds, against holding a drinks party at No10 in the first lockdown.