WASHINGTON — When senior Food and Drug Administration officials held their morning call on Tuesday, they received a sobering warning from the agency’s chief, Dr. Stephen M. Hahn, who had just gotten off the phone with the White House: Block out “all the craziness” afoot and stay focused on fighting the pandemic, he said.

There is plenty of craziness. President Trump is pushing to overturn the results of the election and his only public statements about the coronavirus in the last few days were to make clear his pique that good news about a vaccine had not come until after Election Day — even as the average number of new daily infections topped 116,000, average daily deaths neared 1,000, and Covid-19 hospitalizations hit a record high of 61,964 on Tuesday.

Vice President Mike Pence canceled a vacation at the last minute this week as the virus numbers grew worse, but the White House coronavirus task force that he leads has been all but publicly silent. Mark Meadows, the White House chief of staff who is infected with the virus, declared last month, “We are not going to control the pandemic,” and said the focus should instead be on the longer-term goals of developing vaccines and treatments.

Meantime, the Strategic National Stockpile, the nation’s emergency reserve, has only 115 million N95 masks, far short of the 300 million the administration had hoped to amass by winter, Rear Adm. John Polowczyk, who retired on Monday as the national supply chain commander, said in a recent interview, though he added that the government is continuing to expand its supplies of protective gear.

The pandemic caught the nation flat-footed in March, but epidemiologists have been warning for months of a fall and winter wave as people are driven indoors, schools resume in-person classes and Americans grow tired of months of precautions. Yet shortages of personal protective equipment are back, especially among rural hospitals, nursing homes and private medical practices that lack access to the supply networks that serve larger hospital chains.

Dr. Shikha Gupta, the executive director of Get Us PPE, a volunteer effort that matches available supplies to health care providers, said 70 percent of those requesting help from the organization last month reported being completely out of one type of critical gear. Masks, gloves and disinfecting wipes topped the list.

“Health care workers are exhausted and frustrated, and it’s really hard to believe that on Nov. 10, it feels very much like the middle of March all over again,” she said. “We’re hitting the highest numbers of caseload that we’ve ever seen, and we’re running into the same problems that we’ve been having since Day 1.”

Governors are once again competing with one another and big hospital chains for scarce gear. Nursing homes are grappling with staff shortages, which have left hospitals unable to discharge patients to their care. In Wisconsin, the situation is so severe that health officials are mulling a plan to train family members of nursing home residents to fill in at facilities that lack enough workers.

“We’re throwing every idea that we can conceivably think of to the state, but we really need bold action from the federal government,” said John Sauer, the president of LeadingAge Wisconsin, an association that represents nonprofit nursing homes and long-term care facilities. “We can’t muddle through this on our own.”

The United States is on somewhat better footing now than in the earliest days of the pandemic. States and hospitals have their own stockpiles, and Admiral Polowczyk said the federal government had met its goal of acquiring 153,000 ventilators. 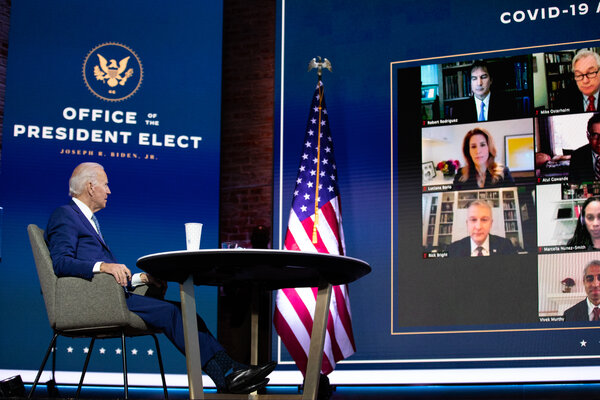 But as the country enters what may be the most intense stage of the pandemic yet, the Trump administration remains largely disengaged. President-elect Joseph R. Biden Jr. is trying to assume a leadership mantle, with the appointment of a coronavirus advisory board and a call for all Americans to wear masks, but until his inauguration on Jan. 20, he lacks the authority to mobilize a federal response.

“With 1,000 deaths per day, it’s like two jumbo jets dropping from the sky,” said Dr. Carlos del Rio, an infectious disease specialist at Emory University who is close to Dr. Deborah L. Birx, the White House coronavirus response coordinator. “If every day, two jumbo jets would drop from the sky and kill everybody, don’t you think that everybody would be in a panic? But somehow, we’re not doing that. Somehow, as a nation we’re not outraged.”

“We need a Churchill,” he added. “We need somebody to step into the vacuum and lead the nation.”

Instead, Mr. Trump is at war with his own health officials. He was furious after the drug maker Pfizer announced Monday that early clinical trial data suggested its coronavirus vaccine was more than 90 percent effective. In a conversation with Dr. Hahn, a senior administration official said, the president accused the company and the F.D.A. of conspiring to delay news that could have bolstered his chances of re-election.

Aides said the president believed that Pfizer could have announced the success of its clinical trial before Nov. 3 but deliberately chose to hold up the news, possibly not to taint the company’s vaccine as a last-minute effort to save Mr. Trump’s re-election bid. White House aides were particularly incensed that Mr. Biden publicly said his public health advisers knew of Pfizer’s results on Sunday, before aides said the news had reached the White House.

Beyond Mr. Trump’s Twitter feed, the federal bully pulpit — an essential component of an effective infectious disease response — has largely gone silent. Dr. Anthony S. Fauci, the government’s top infectious disease expert, said in an interview on Tuesday that the vaccine would be “a game changer” over time.

But a vaccine is not an immediate panacea, and until doses become widely available — likely in mid-2021 — the nation is in a “difficult situation,” he said, that calls for Americans to wear masks and social distance, and to avoid crowded settings, particularly indoors.

“My message to the American public is: Hang on, help is coming, a vaccine is on its way, we need to all pull together,” Dr. Fauci said.

Washington’s leadership void is raising anxiety in the states.

“We’re facing a dire situation as we head into the fall and winter,” said Casey Katims, the federal liaison for Gov. Jay Inslee of Washington State.

In Ohio, Gov. Mike DeWine, a Republican, canceled his customary Tuesday afternoon virus news conference and instead planned to deliver a statewide address early Wednesday evening as local officials reported a daily caseload of more than 6,500 — nearly 1,000 more than the record set on Saturday.

In North Dakota, Gov. Doug Burgum said this week that the state’s hospitals were full and that even health workers who test positive for the virus but do not display symptoms would be allowed to work in wards dedicated to coronavirus patients.

“Leadership does matter,” said Dr. Howard Markel, a professor of the history of medicine at the University of Michigan who helped shape federal social distancing policy during the George W. Bush administration. “What your leaders do, like flaunting the mask or having parties without masks, almost encourages people to do the same.”

In the absence of leadership, local officials feel as if they are struggling alone. New weekly cases among nursing home residents jumped fourfold from the end of May to late October, and deaths have more than doubled in 20 states, according to R. Tamara Konetzka and Rebecca J. Gorges, researchers at the University of Chicago who analyzed data from the C.D.C.

“The depressing message is that nothing much has changed since the spring,” Professor Konetzka said.

Even many large hospital chains, which say they have adequate supplies of medical gear, continue to operate in crisis mode. That often means requiring employees to repeatedly reuse respirator masks that are meant to be discarded after each use.

Deborah Burger, a president of National Nurses United, the largest organization of registered nurses, said the lack of clear guidance from the C.D.C. had allowed hospitals to create their own standards for reusing disposable protective gear, which she said put hospital workers and patients at increased risk of infection.

“We’re 11 months into the pandemic, and the administration is still not adequately addressing the safety of health care workers and the safety of our communities,” she said. “I’ve been a nurse for over 45 years, and I have never seen anything like this. It’s like we’re in ‘The Twilight Zone.’”

The White House has fixated on Operation Warp Speed, the administration’s crash vaccine and therapy development program, while its coronavirus task force has whittled down to rote weekly gatherings in the Situation Room. But far from celebrating the Pfizer news on Monday, the administration initiated a round of recriminations.

In a Twitter message on Monday, Mr. Trump said that Pfizer deliberately postponed announcing its good news, and that the F.D.A. had supported that delay.

In a meeting of the coronavirus task force on Monday afternoon, Mr. Azar confronted Dr. Hahn about the Pfizer announcement and said the F.D.A.’s coordination with Pfizer and its exhaustive vaccine guidelines had delayed the news of the breakthrough, according to senior administration officials who witnessed the exchange.

He questioned Dr. Hahn’s timeline for an emergency authorization of Pfizer’s vaccine.

The president’s allies suspected that Pfizer could have obtained results from its trial earlier, but chose not to. Pfizer had in fact initially planned to request seeing the results from an independent safety monitoring board once 32 of its clinical trial participants who had received either the vaccine or a placebo had come down with Covid-19. That would have been the company’s first barometer of its effectiveness.

But weeks ago, Pfizer officials said, F.D.A. regulators had advised that they would be unlikely to issue an emergency use authorization for Pfizer’s vaccine based on just 32 cases in a trial with nearly 44,000 people.

Pfizer decided to wait for more cases. By last weekend, 94 subjects had tested positive for Covid-19, a sample seemingly more than sufficient to satisfy the F.D.A. The company said an early analysis showed the vaccine was more than 90 percent effective.

Pfizer has said it expects to apply for emergency use authorization by late November, and experts expect the F.D.A. to decide as early as mid-December. But Pfizer has said it has manufactured only a few million doses, and experts are hoping the government can step in to help speed up manufacturing. A second vaccine maker, Moderna, could soon seek F.D.A.’s review of its clinical trial results.

On Monday, the F.D.A. granted emergency authorization to Eli Lilly for an antibody treatment similar to a therapy given to Mr. Trump shortly after he contracted the coronavirus. The company has a limited number of doses and the treatment is only authorized for newly infected patients who have not been hospitalized.

Some in the agency took Dr. Hahn’s Tuesday warning to his senior staff members about “craziness” afoot as a sign that the president might fire him. Others said the commissioner was merely acknowledging the obvious: The postelection period will be rocky.