Trump expected to use strong US labour market and rebound in stocks to pitch for bipartisan support on signature issues. 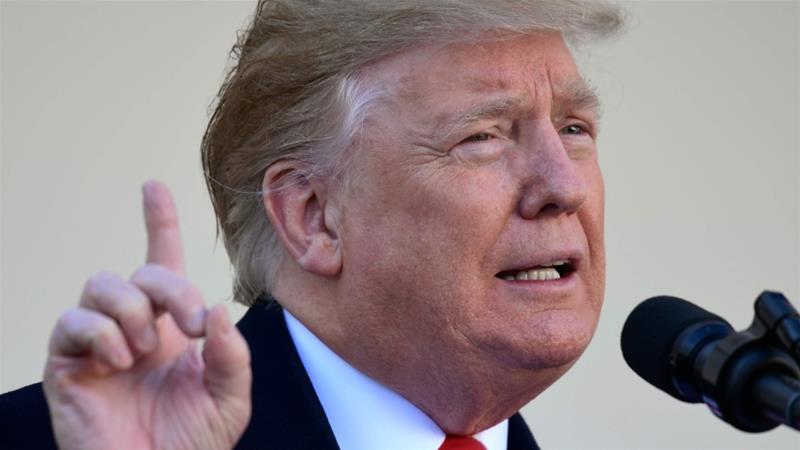 Good news on the economic front is always welcome. For US President Donald Trump, it arrived just in the nick of time.

A week ago and a half ago, some hardline conservatives were lambasting the president for agreeing to reopen the government without winning a single concession from congressional Democrats on funding for a border wall and border security.

One conservative pundit even called Trump a “wimp”.

Adding injury to the insult, the nonpartisan Congressional Budget Office reported at the start of last week that the partial government shutdown – the longest in US history – took a $11bn bite out of the economy, $3bn of which is unlikely to be recovered.

But before the week was out, the fallout over the shutdown had been eclipsed by economic headlines that played in Trump’s favour.

On Wednesday, Federal Reserve Chairman Jerome Powell signalled that the US central bank might hold interest rates steady for some time – a reversal from the Fed’s position in December and something Trump has long agitated for.

On Thursday, the Dow Jones Industrial Average and the S&P 500 closed out the month with their strongest January gains in 30 years, a sharp turnaround from the end of 2018 when markets were roiled by concerns over rising interest rates, US-China trade tensions and slowing global growth.

And on Friday, the US Labor Department reported that the economy brushed off the shutdown to create a blockbuster 304,000 jobs in January. A key gauge of US manufacturing also picked up last month.

Presidents often use their annual State of the Union address to take credit for signs of economic strength and Tuesday evening’s will likely prove no exception.

“It will be all unicorns and rainbows and to be fair, the economy is doing pretty well,” Veronique de Rugy, senior researcher at the conservative think-tank the Mercatus Center told Al Jazeera.

Trump is widely expected to tout his stewardship of the economy – specifically tax cuts and regulatory rollbacks passed on his watch – as drivers of the economy’s continued health. He’s also likely to harness that platform to appeal for cooperation from congressional Democrats on policies aimed at boosting infrastructure spending and reining in the cost of prescription drugs.

“If he’s going to look for anything that’s bipartisan, infrastructure and high drug prices are going to be on the list of things he’s going to want to talk about,” said de Rugy.

But many of the economic risk factors that prompted Fed Chairman Powell to signal patience on further interest rate increases remain, such as trade tensions and slowing global growth.

Recent data confirms economic growth is slowing in the eurozone and Canada while manufacturing in China has contracted for two consecutive months.

Meanwhile, the March 1 deadline is closing in fast for the United States and China to either resolve their trade differences or see Washington slap further tariff increases on some $200bn of Chinese goods.

Though Trump is likely to use his bully pulpit on Tuesday to take credit for all that’s good in the economy, critics point out that many Americans still live on a financial knife-edge. A survey published last year by the Federal Reserve, for example, found four in 10 US adults were unable to afford an emergency $400 expense.

“In his State of the Union address, President Trump will tout carefully chosen data about the economy in order to make a case for his policies,” Lily Roberts and Andy Green of the liberal-leaning think-tank Center for American Progress wrote in a blog post on Monday. “Yet the statistics that the president uses to brag about the economy do not capture the full picture. Moreover, they hide where – and which – Americans continue to struggle.”