In leaked European Council conclusions, capitals will say there is a “concern that progress on the key issues of interest to the Union is still not sufficient for an agreement to be reached”. It comes after days of last-ditch wrangling over a post-Brexit trade deal by Lord Frost and Michel Barnier ahead of the crunch summit on Thursday. The gathering has been touted by Boris Johnson as the final possible moment to establish whether a deal is doable or not.

In a draft version of an EU leadership statement, they say: “The European Council reaffirmed the Union’s determination to have as close as possible a partnership with the United Kingdom on the basis of the negotiating directives of February 29, 2020.

“Against this background, the European Council invited the Union’s chief negotiator to intensify negotiations with the aim of ensuring that an agreement can be applied from January 1, 2021.” 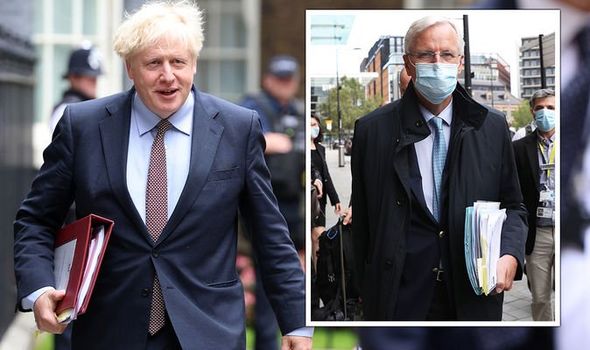 The memo adds: “The European Council calls on member states, Union institutions and all stakeholders to step up their work on preparedness and readiness at all levels and for all outcomes, including that of no agreement.”

The Prime Minister yesterday told his Cabinet Britons show have “no fear” of a future without a Brexit trade deal.

But he said a deal is still possible as the negotiations reach a crucial stage.

Mr Johnson signalled he would be content to walk away and adopt an arrangement similar to Australia’s no-deal relationship with the EU if the bloc sticks to its hardline demands for unchanged fishing quotas and continued regulatory meddling.

Reporting on the Cabinet meeting, the Prime Minister’s spokesman said: “The PM said Lord Frost is currently in Brussels seeking to find a way through, and he believed there is still a deal to be done.

“The PM reiterated that, while we want a deal on the right terms, if we can’t get there we are ready and willing to move forward with an Australian-style outcome, which holds no fear.”

And British negotiators have blamed Mr Barnier’s for the recent lack of progress in the talks.

A UK Government source said: “The EU has been using the old playbook in which they thought running down the clock would work against the UK.

“They have assumed the UK would be more willing to compromise the longer the process ran, but in fact all these tactics have achieved is to get us to the middle of October with lots of wasted work.

“This is all the more frustrating because it is clear that we have come a long way since the beginning of the year. We have approached the negotiations constructively and reasonably but time is now extraordinarily short. We need the EU to urgently up the pace and inject some creativity.”

European industry leaders were also pushing for the bloc to accelerate its efforts to ensure businesses have time to prepare for January 1, when the UK leaves the single market and customs union.

A spokesman for Ceemet, a European employers’ association, said: “Manufacturing heavyweights call on all parties involved to break the current impasse, avoid a no-deal exit, and ensure our industrial sector has the necessary time to adapt.”