The Queen could be called upon to stop a no-deal Brexit under plans by a former cabinet minister.

Sir Ed Davey, who is standing to be the new Liberal Democrat leader, revealed he would urge other opposition parties to support a “humble address to Her Majesty” should the UK near departing the EU without a divorce agreement.

This would require the prime minister to revoke the Article 50 notification of the UK’s intent to leave the EU.

A humble address is a parliamentary motion that acts as a direct message from the House of Commons to the Queen, calling on the government to comply with a request. 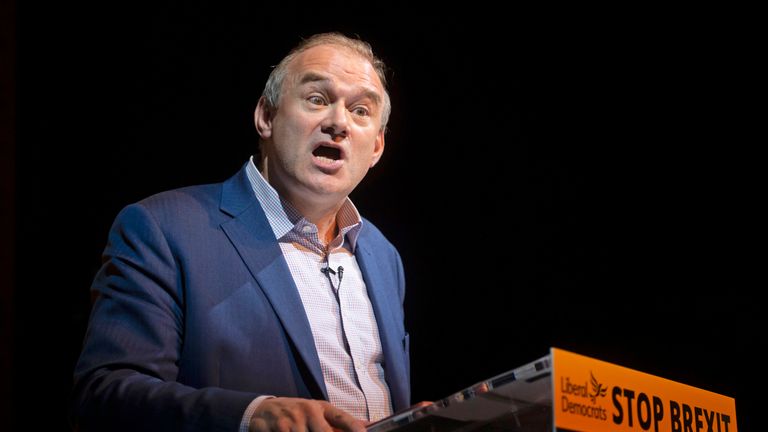 Such a humble address, considered to be binding, was used by Labour in November to force the government to release its full legal advice on the Brexit deal.

A year earlier, Labour had also used the mechanism to secure the publication of the government’s assessment of the impact of Brexit on the UK economy.

Speaking at his leadership campaign launch on Thursday, Sir Ed said he would propose a “cross-party humble address to Her Majesty, requiring the prime minister to revoke Article 50 if we got to the cliff edge”.

He called on Labour leader Jeremy Corbyn to “join me in that address”.

Sir Ed also said, under his leadership, the Lib Dems would “continue to lead the fight to stop Brexit”, as he claimed: “Nothing is more urgent in British politics today”.

The Lib Dems will announce their successor to departing leader Sir Vince Cable on 23 July.

The party have recently been boosted by a strong showing at this month’s local elections and European Parliament elections, where they came second ahead of both Labour and the Conservatives.

Sir Ed, who served in the coalition government as energy and climate change secretary, is likely to face competition for the Lib Dem leadership from current deputy leader Jo Swinson.

Lib Dem education spokesperson Layla Moran, who had also been considered among the frontrunners for the leadership, announced earlier this month she would not be entering the contest.

Norway says its economy may contract 4% this year