Julián Castro, a former housing secretary under President Barack Obama, was the first candidate to release an immigration plan. It’s one of the centerpieces of what he refers to as his “People First” platform.

Mr. Castro’s plan seeks to downgrade border crossing from a criminal to a civil offense, charts a path to citizenship for undocumented immigrants and calls for a 21st-century “Marshall Plan” for Central America.

His plan also seeks to undo much of the anti-immigration agenda advanced by the Trump administration. He would stop construction of the border wall, end the “Remain in Mexico” asylum policy and rescind the ban on refugees from certain countries entering the United States.

More broadly, his plan seeks to restructure the post-9/11 immigration-enforcement system in a comprehensive way.

How he uses it

As the former mayor of San Antonio and the only Latino candidate in the race, Mr. Castro makes it clear that he has both lived and dealt with the effects of immigration. He casts himself as the candidate best equipped to grapple with the complicated issue.

Mr. Castro frames his approach to immigration as driven by compassion, a clear and purposeful distinction between his politics and those of President Trump.

The United States doesn’t have the best reputation when it comes to economic intervention in Latin America.

Lawmakers have tried unsuccessfully to pass immigration reform for decades. If Congress is divided in 2020, broad compromise on a sweeping plan seems unlikely. 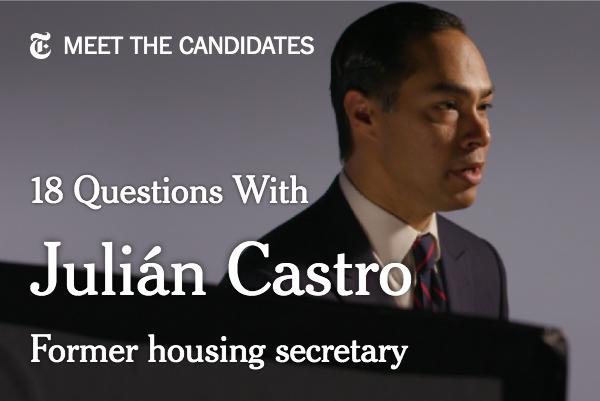