Home » Politics » Inside the Republican Strategy to Discredit the Florida Recount

Inside the Republican Strategy to Discredit the Florida Recount

TALLAHASSEE, Fla. — The concerted effort by Republicans in Washington and Florida to discredit the state’s recount as illegitimate and potentially rife with fraud reflects a cold political calculation: Treat the recount as the next phase of a campaign to secure the party’s majority and agenda in the Senate.

That imperative — described by Republican lawyers, strategists and advisers involved in the effort — reflects the G.O.P.’s determination to tighten its hold on power in the narrowly divided Senate. The outcome of the Florida race will decide whether the party controls as many as 53 seats and has a freer hand to confirm Republican-backed judges with the vote of the man at the center of the recount, Gov. Rick Scott, who is trying to oust a three-term Democrat, Bill Nelson.

With the Democrats capturing a Republican-held Senate seat in Arizona on Monday night, the recount fight in Florida becomes even more consequential.

Beyond the Senate majority, there is also the matter of morale. Any reversal of an election that Republicans believe they already won in a state as symbolically important as Florida — the country’s most competitive political battleground — would be a blow to a party that had a net loss of at least 32 House seats and six governorships. Everyone from donors to rank-and-file lawmakers is determined to keep Democrats from notching another victory.

Mr. Scott and his allies have tried to portray the Senate election as a fait accompli — he is currently ahead by about 13,000 votes — and the recount as a futile attempt to prolong the inevitable. Indeed, between 2000 and 2016, there were 4,687 statewide general elections and just 26 statewide recounts. Only three — or 0.06 percent of all statewide elections — reversed the initial result, according to an analysis by the nonpartisan group FairVote.

“This has been decisive,” Representative Brian Mast, a Florida Republican who represents parts of Palm Beach County, said on Monday. “I hope this can wrap up quickly.”

But the Republicans’ posture on the recount — especially the party’s claims of fraud and cover-up and President Trump’s latest assertion on Monday of forgery, all presented without evidence — has been deeply divisive and even drew a stern rebuke Monday from the chief state judge in Broward County, Fla., Jack Tuter. He urged lawyers involved in the battle over the recount to “ramp down the rhetoric” and take any accusations of electoral fraud to the police.

The Republicans’ strategy in Florida reflects their experience in the 2000 presidential recount in the state. Party strategists and lawyers say they prevailed largely because they approached it as they did the race itself, with legal, political and public relations components that allowed them to outmaneuver the Democrats, who were less strategic and consistent with their lawsuit targets and public remarks about the recount.

See How Close the Results Are in Arizona, Georgia and Florida

The races for Senate and governor may head to a recount or a runoff.

This time around, though, Democrats are holding little back. The party’s candidate for governor, Andrew Gillum, retracted his concession once the recount in his race began, even though he will have to close a vote deficit that is about three times as large as Mr. Nelson’s.

The effort that Mr. Scott and Republican allies are waging today is strikingly similar to that multifront war in 2000 led by the George W. Bush campaign and an army of party consultants. Lawyers are filing complaints in Tallahassee; surrogates for the Republican candidate are holding news conference calls with journalists and sitting for interviews on cable, blaming the Democrats for tarnishing the integrity of the electoral process; and party officials are encouraging demonstrators to gather at sites where the recounts are taking place.

There is one new variable, however: Mr. Trump.

The president, who has long fanned unfounded claims of voter fraud, is especially concerned with the Florida outcome, according to people in touch with him about the recount. And he equates his political success with that of Ron DeSantis, the Republican nominee for governor whose campaign was taken over by Trump aides, as well as with that of Mr. Scott, whose victory he believes he ensured by campaigning across the state and pulling him over the finish line. Mr. Trump sees the recounts, one person close to him said, as akin to a personal attack.

Mr. Trump has been more combative and unrestrained in slinging claims of fraud and unfairness than Mr. Scott or Mr. DeSantis. The recount story hits many of the president’s sore spots, including his frequent insistence that his political opponents cheat against him and his unproved belief that American elections are tainted with illegal voting, especially by undocumented immigrants.

But with such aggressive, unyielding attacks on Democrats, Mr. Trump and his Republicans risk treading into territory that is a minefield of tension over race. Their repeated allegations of subterfuge and fraudulent ballots are a blunt appeal to a political base motivated by the notion that elections are often stolen by Democrats. And in this case, some of the central players are African-Americans, including Mr. Gillum and the Broward County supervisor of elections, Brenda C. Snipes, whom Republicans like Mr. Scott have called out by name for enabling “rampant fraud,” as the governor put it last week.

In the face of the Republican cries of ballot fraud and political mischief, Judge Tuter in Broward County refused a request by Mr. Scott to order the county police to impound voting machines and ballots when they are not in use. The judge was also critical of comments made by Mr. Scott’s lawyers on television and social media perpetuating the unsubstantiated rumors of fraud.

“We need to be careful what we say,” Judge Tuter said. “These words mean things these days, as everybody in the room knows.”

Donna Brazile, who managed Al Gore’s presidential campaign in 2000 and is one of the most prominent African-American women in the Democratic Party, decried what she described as obvious racial undertones in the Republican attacks on the recount process.

“Democracy is often noisy, but it shouldn’t lead to politicians using dog-whistle politics to further divide people, as well as undermine confidence in our electoral process,” she said. 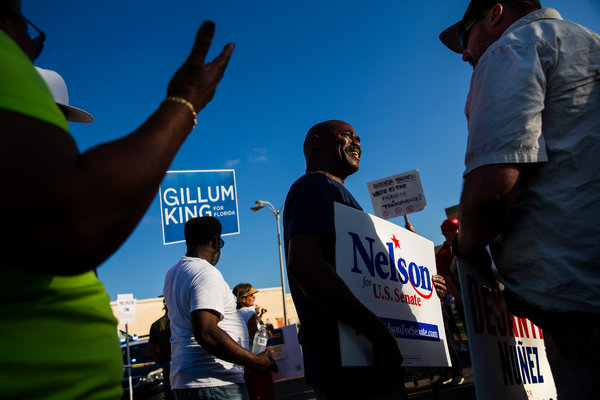 And some Republicans warned that incendiary language, when used by either party during electoral disputes, was sometimes troubling.

“Screaming fraud or unfairness is probably not a constructive first step,” said Marc Racicot, who was the Republican governor of Montana when he spoke regularly on Mr. Bush’s behalf during the recount in 2000. “That doesn’t mean you shouldn’t be vigilant, and that you shouldn’t look for opportunities for there to be something that has gone awry. But I don’t think I would start there.”

In recent days, unverified and sometimes wild claims of sabotage and deception have been circulating on Twitter and elsewhere on social media, spread with the help of far-right activists who have large internet followings and a history of embellishing and exaggerating claims of Democratic-led conspiracies.

One that gained traction on Monday suggested that the Broward County Sheriff’s Office had staged a bomb threat at the Fort Lauderdale-Hollywood International Airport on Sunday to cover up the discovery of a box of provisional ballots that were left in a rental car. It appears to have originated with Laura Loomer, a former associate of James O’Keefe, the activist famous for using hidden cameras to embarrass prominent liberal targets. Rush Limbaugh informed his readers of the story on his radio show on Monday afternoon.

Roger Stone, a friend of the president’s who shares and encourages some of Mr. Trump’s own baseless claims, has also become an outspoken voice in the recount process.

“I have never seen anything as brazen, as outrageous, as one-sided as the process that’s going on in Broward County,” Mr. Stone, a Floridian and veteran of the 2000 recount, said in a video posted to InfoWars, the site founded by Alex Jones, a promoter of various “false flag” theories.

On the ground, both Republicans and Democrats are deeply involved in the recount effort, but the G.O.P. organizing muscle from Washington and elsewhere is particularly notable.

Republican officials said more than 100 staff members from the Republican National Committee are in Florida, and thousands of trained volunteers. The party, along with Mr. Scott’s campaign, has also undertaken a new fund-raising effort to cover the mounting costs of lawyers, paid personnel and the mountain of logistics that accompany a recount with so many people involved. The party committee sent an email to its supporters late Monday that had the subject line “FW: STOLEN?” and included an image of the president’s tweet saying the Democrats were committing fraud.

White House officials privately said that while Mr. Trump and the party continued to hammer the message of voter fraud, they anticipated that the vote tallies would not change drastically over the course of the recount, and that Mr. Scott would be certified as the winner. Other Republicans involved in the effort have expressed similar confidence in private, pointing to Mr. Scott’s margin of roughly 13,000 votes over Mr. Nelson as likely too large to change decisively in a recount.

Mr. Bush’s lead over Mr. Gore after the polls closed on election night in 2000 was 1,784. After a recount that proceeded in fits and starts and took more than five weeks before being settled at the Supreme Court, Mr. Bush won by 537 votes.