Home » Politics » In Conservative Districts, Democrats Have to Answer for Party’s Left Wing

In Conservative Districts, Democrats Have to Answer for Party’s Left Wing

NEPHI, Utah — In the suburbs of Salt Lake City, Representative Ben McAdams, a freshman, was grilled by constituents about the “socialism” and “anti-Semitism” that they saw coming out of the new Democratic House.

“How long do you intend to ride that train with those people?” one Utahan asked.

In Michigan, Representative Haley Stevens was asked about her ability to counter what one voter deemed the bigotry of some of her freshman colleagues — a concern fueled partly by remarks from her counterpart in nearby Detroit, Rashida Tlaib — and “the negative attitude they bring to Democrats.”

And on a rainy Saturday in Spotsylvania County, Va., one woman stood up in a town hall to remind Representative Abigail Spanberger that while she was the first Democrat to hold that seat in nearly 50 years, the majority of the rural enclave had voted Republican.

“Since the Democrats are now the party of death and taxes,” the woman said, as Democratic supporters scoffed and grumbled, “just how do you propose to effectively represent the taxpayers of Spotsylvania?”

It was Democrats like Mr. McAdams, Ms. Stevens and Ms. Spanberger who secured the party’s House majority, political moderates who won districts often long represented by Republicans. Of the 67 Democrats in Congress’s freshman class, roughly a third prevailed in districts where President Trump won in 2016.

That serves as another indication that Democrats will have to confront the intraparty tussle between liberals and moderates to decide what they stand for, whom they appeal to and where their electoral future lies.

Last week, home for the first district workweek of their term, moderate Democrats got to see firsthand how the raised voices of a small but vocal number of lawmakers such as Representatives Tlaib, Ilhan Omar of Minnesota and Alexandria Ocasio-Cortez of New York are reverberating in far more marginal districts. Some, like Representative Andy Kim of New Jersey, were asked to account for the “uptick of negative rhetoric” coming from the freshman class.

“My job is to focus in on you. I don’t know how other members of Congress are making their decisions about what to say,” Mr. Kim told constituents in the coastal township of Berkeley, “but I’ll certainly stand up and disagree whenever there is something out there I disagree with.”

Just two months into the new Congress, Republicans have begun an all-out assault painting Democrats as extremists — even bigots — and trying to tar moderates with their more liberal freshman counterparts’ beliefs. Their talking points appear to be resonating with some voters the Democrats will need next year if they are to keep their majority — and the voters determined to flip the districts back.

“It’s a challenge, but it’s what I signed up for,” Ms. Spanberger said in an interview after the town hall. She made a point of thanking her more critical questioners, including Dale Swanson, a founder of the local conservative women’s coalition, for their presence and their questions.

“If you’re only walking into comfortable spaces and comfortable rooms,” she added, “you’re probably not doing your job.”

But Ms. Spanberger said she has had conversations with colleagues in more solid blue districts about the impact of both hard-line liberal policy and the tone of opposition, which have prompted her to emphasize in town halls, sometimes unprompted, that she is “absolutely not a socialist.”

“When people say things in snarky ways or disrespectful ways or flippant ways, that creates an issue in districts like ours,” she said. “It’s real easy to be kind of snarky in the majority.”

At a pair of town halls last week in the deeply Republican suburbs of Salt Lake City, Mr. McAdams, an affable and mild-mannered former Salt Lake County mayor, fielded pointed questions about whether he supports the Green New Deal and socialism. More broadly, constituents worried how their moderate congressman might fare in the same caucus as the liberal bomb throwers. Richard Hansen, a Republican county commissioner and one of the two dozen constituents who attended the town hall in Nephi, a mountain town of 6,000, shared a wish with the Utah Democrat: “I hope they don’t corrupt you.” 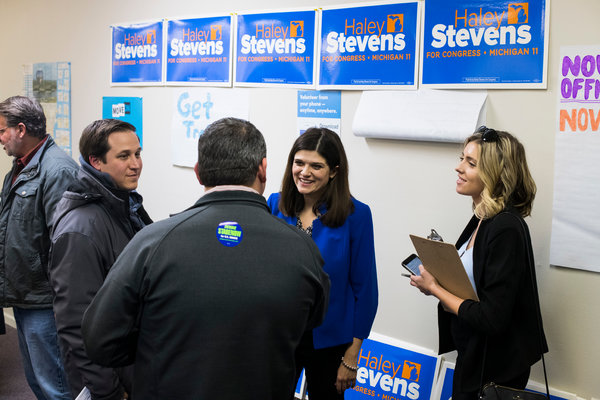 Mr. McAdams, who ousted Mia Love, the only black Republican woman in Congress who won her last election by nearly 13 points, appeared to relish the chance to wax defiant against his party, which he acknowledged had both “good and bad.”

“If I’m solid and unequivocating that I’m going to vote for my district, nobody really puts much pressure on me,” Mr. McAdams assured his constituents.

Democratic leaders have played down Republican efforts to divide the party, and accused Republicans of trying to divert attention from a popular legislative agenda that includes shoring up health care coverage and expanding background checks for gun purchases. They also accuse Republicans of hypocrisy in their accusations of anti-Semitism in the Democratic ranks, set off by Twitter comments by Ms. Omar, who implied that American support for Israel was fueled by money from a pro-Israel lobbying group.

“A newcomer member of Congress has apologized for her remarks,” Speaker Nancy Pelosi said after condemning Ms. Omar’s comments. She then raised the embrace of white supremacy by a veteran Republican representative: “It took them what, 13 years to notice Steve King?”

Still, in a brief interview, Representative David Cicilline of Rhode Island, chairman of the Democrats’ communications arm, acknowledged that “we are a large caucus, and there is a tendency to take legislation or statements by one member and attribute it to the entire caucus.”

“Democrats need to continue to make it clear we’re fighting for the people of the country, get the government working for them again,” he said. “On those core Democratic issues, we’re really united.”

Many of the newly elected progressive freshmen probably “aren’t thinking that whatever they say might do harm to their class, and that’s not going to change,” said Rodell Mollineau, a Democratic strategist and former aide to Senator Harry Reid of Nevada, the former majority leader. “The more progressive messaging is what sells right now. That’s what everyone is talking about, so it will be harder for moderates to break through. But that’s why it’s important to repeat their view of the world to their constituents.”

Back home, Mr. McAdams, Ms. Stevens and Ms. Spanberger tried to do just that, seeking out the more conservative corners to temper concerns and reassure supporters that they are focusing on popular policy priorities like broadband internet access in rural Virginia and environmental concerns in Michigan.

“It didn’t come as a shock at all,” Ms. Stevens said in an interview after a town hall in Milford, Mich., a General Motors town, referring to the questioner who asked about anti-Semitic remarks. Both she and Mr. Kim took the opportunity to underscore not only their own support for Israel, but also the continuing discussions about the need for peace in the Middle East.

But pivoting to other issues may prove more effective than defending embattled colleagues. Ms. Stevens’s vow to put pressure on Betsy DeVos, the education secretary, generated some of the biggest applause of the night, as did her promise to advocate cleaning up the Great Lakes.

“You got to read the room,” she said.

More liberal supporters of the newcomers said that while they aspire to have someone openly pushing for universal health care, free postsecondary education and other more aggressive policies, a moderate approach is what will maintain Democratic representation in their districts.

“Those are things I could put aside,” said Damon Burkeen, 17, a high school senior who drove an hour on icy Michigan roads to hear Ms. Stevens speak. “She fits our district,” which, aside from an odd two-month blip in a lame-duck session in 2012, has been represented by Republicans for 52 years.

Bill Rucker, a retired chemistry and biology teacher from Milford, said that as a fan of Ms. Ocasio-Cortez and Ms. Tlaib, he “wouldn’t mind if Haley was more that way.”

In Utah, Mr. McAdams’s self-proclaimed independent streak may have won over his constituents. Asked about his support for the newly elected representative, Mr. Hansen, the Republican who wished aloud that the party would not corrupt him, did not have to think twice.

And in a Virginia auditorium, Ms. Spanberger’s willingness to listen to her critics did not appear to win her additional votes — but she did earn some measured respect from Ms. Swanson, the conservative coalition founder, who said she went to the town hall believing that her new representative was “a very liberal and socialist Democrat.”

“Her respectfulness changed how I think of her personally, maybe not the party,” Ms. Swanson said.

“We will see,” she added as she left. “Time will tell. People can tell you anything.”