In a Divided Washington, Biden Could Still Exert Economic Power

WASHINGTON — President-elect Joseph R. Biden Jr. will take office in January with a weak economy weighed down by the resurgence of the coronavirus, millions of Americans still unemployed and businesses struggling and shuttering as winter bears down.

Addressing that economic challenge and following through on his campaign’s tax and spending promises could be complicated if Republicans maintain control of the Senate.

But as President Trump has demonstrated time and again, Mr. Biden has the power to pull some levers unilaterally, without congressional approval, and could influence the federal government’s economic policymaking machinery through an array of executive actions, regulations and personnel changes.

“There’s a tremendous amount that can be done without Congress,” said Felicia Wong, who serves as an adviser on the Biden transition board but who was speaking in her capacity as head of the Roosevelt Institute, a progressive think tank.

From finding ways to stimulate the economy to changing trade rules to tinkering with corporate taxation, here are some of the ways a Biden presidency could unilaterally influence economic policy. 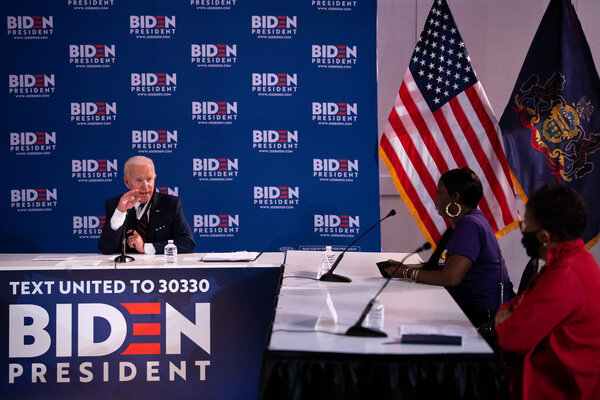 In the run-up to to the election, Mr. Trump saw the limits of the White House’s ability to jump-start the economy without Congress. He repurposed some federal funds to temporarily extend expanded unemployment insurance and allowed companies to defer collection of workers’ payroll taxes but found his hands largely tied beyond those measures. Economists and political advisers say Mr. Biden could seek other creative approaches if a Republican Senate blocks the kind of big spending package that Democrats have been pushing.

That includes providing student debt relief, which Ms. Wong said would work as a sort of stimulus by removing the burden of those payments. Mr. Biden could direct the Education secretary to forgive student loans up to a certain amount — Ms. Wong would favor as much as $50,000 to $75,000 for low- and moderate-income households. That move, she said, would strongly benefit workers from minority racial and ethnic groups.

The administration could also use executive authority to raise the minimum wage for federal contractors to $15 an hour, she said, providing a pay boost for many thousands of workers.

Mr. Biden will be able to exert some additional oversight over the $2.2 trillion stimulus package that passed in March. For instance, small businesses that took Paycheck Protection Program loans were required to keep workers on payrolls, and he could instruct his Treasury Department to more rigorously scrutinize the loans to ensure that the money was actually going to pay salaries and overhead costs.

Mr. Biden could also take a page from Mr. Trump and seek to repurpose unspent funds from that stimulus legislation, including hundreds of billions of dollars that were earmarked for the Paycheck Protection Program but never allocated before a congressional deadline ended the program. He could also lean on the Treasury to make lending facilities established by the Federal Reserve more generous and attractive to users, if they haven’t expired by the time he enters office.

Mr. Biden proposed trillions of dollars of tax increases on high earners and corporations in his campaign. Much of that agenda would require cooperation from Congress, but in a few areas, a Biden administration could act on its own to raise taxes — largely by changing regulations governing how Mr. Trump’s signature 2017 tax law is carried out.

Several of those regulations apply to income earned abroad by multinational corporations that operate in the United States. A Biden Treasury Department could move to reverse a series of decisions that Mr. Trump’s team made after the 2017 law was passed that effectively reduced the liability of multinationals under a pair of new taxes created by the law, known as the Base Erosion and Anti-Abuse Tax and the Global Intangible Low-Taxed Income.

Mr. Biden campaigned on a promise to raise U.S. tax liability on multinationals’ global income, which he could attempt to do via regulation by changing how the liability is calculated. His Treasury Department could also attempt to roll back a so-called high-tax exemption, which allowed some companies to lower their tax bills in the United States.

A Biden Treasury could also change the regulations covering Opportunity Zones, another creation of the 2017 law that is intended to entice investment in high-poverty areas by providing a tax break. Such changes could make it more difficult for investors to qualify for the tax benefits from the zones, and Treasury could impose more stringent reporting requirements on projects that qualify for the breaks.

As Mr. Trump has shown, the executive branch has a great deal of latitude when it comes to trade policy.

Mr. Biden will face several trade decisions in the short term, including whether to continue with Mr. Trump’s ban on TikTok and WeChat, the popular social media apps, and whether to retain America’s tariffs on Chinese goods and foreign metals.

Mr. Biden would not need congressional approval to deal with these and other outstanding trade issues — including how to resolve a spat with the European Union over subsidies given to Boeing and Airbus, how to resolve global negotiations over digital services taxes and whether to follow through on Mr. Trump’s plans to place new tariffs on Vietnam.

“The administration would want to keep Congress in the loop, but they have a lot of discretion to shift away from Trump’s policies,” said Simon Lester, a trade policy expert at the Cato Institute.

Mr. Biden will also have broad scope to stake out his position on America’s economic relations with China, including whether to continue limiting U.S. exports of sensitive technology like artificial intelligence and robotics. And the next president will also have to decide whether to pursue additional sanctions for human rights violations in the Chinese region of Xinjiang and whether to continue trying to block Chinese investment in the United States.

Congressional approval would be needed if Mr. Biden wanted to pass any free trade deals. But his advisers have said that they are unlikely to pursue any new agreements in the short term, instead focusing on domestic priorities.

Some of Mr. Biden’s other priorities on trade transcend party lines and could gain support among congressional Republicans — like strengthening Buy American rules to devote more federal dollars to American products, or investing in domestic technologies like semiconductors to ensure that China does not gain a competitive edge.

Some of the biggest Trump-era changes to bank regulation have been done through the regulatory agencies, rather than through Congress. Examples include a weakening of the Volcker Rule, which keeps banks from betting for their own profit, and a reworking of the Community Reinvestment Act, which requires banks to invest in poor communities.

A new crew of regulatory officials will have leeway to either undo those tweaks or to impose new ones — which will probably cut toward stronger oversight. Much like the slow drip of deregulation under the Trump administration, any changes coming out of the Fed and its fellow regulatory agencies are likely to be small and steady.

“It is going to be a tough slog for the Democrats on the legislative front,” said Ian Katz, a director and financial policy analyst at Capital Alpha Partners. “The action is really with the regulators.”

But changes may not come that quickly, even if Mr. Biden taps more pro-regulatory officials for the various agencies. One of the most powerful regulatory positions — the Fed’s vice chair for supervision — is held by Randal K. Quarles, a Trump appointee whose term is not up until October 2021.

One area to keep an eye on is climate finance: The independent Fed has been slow to embrace climate stress tests, or to publicly examine how its own policies might take into account climate concerns, against a political backdrop in which climate-related measures seemed overtly political. That could change in the next four years.

A Biden administration could exert huge influence over consumer protections, including those involving debt collection, payday lending and foreclosure abuse.

The Supreme Court ruled in June that the White House has the power to fire the director of the Consumer Financial Protection Bureau without cause, rejecting a federal law that sought to place limits on presidential oversight of independent agencies. That means Mr. Biden will be free to replace Kathleen Kraninger, the bureau’s current director, with someone who will more rigorously scrutinize businesses and ramp up enforcement.

Mr. Katz pointed to payday lending regulation and a debt collection rule at the Consumer Financial Protection Bureau as things that could be on the table quickly.

Richard Cordray, the bureau’s former director, said in a white paper earlier this year that the it should be taking action to help people avoid foreclosure and eviction during the pandemic and be carefully monitoring the practices of debt collectors.

“The C.F.P.B. should make sure companies are complying with all emergency protections on the books, and maximizing assistance to consumers to prevent garnishments, foreclosures and repossessions,” said Linda Jun, senior policy counsel at Americans for Financial Reform.