How Trump’s Brand of Grievance Politics Roiled a Pennsylvania Campaign

Mr. Scavo, a perennial candidate running for the Pennsylvania Legislature on a platform of ending property taxes, was trounced by a Democratic newcomer, Bridget Malloy Kosierowski, the first woman to represent the Scranton-area district in decades. Initially, Mr. Scavo and about 30 supporters sounded conciliatory at their election night party, praising Ms. Kosierowski for a hard-fought campaign.

But soon, after they downed the last pitcher of light beer, the discussion took a darker turn. Many of Mr. Scavo’s supporters were upset that he had drawn significant negative attention for his series of bigoted Facebook posts over the past four years, including ones that painted Muslims as “infidels” and others that promoted conspiracy theories like “Pizzagate,” the false story that Democrats ran a child sex trafficking operation out of a Washington pizza parlor.

[Make sense of the people, issues and ideas shaping American politics with our newsletter.]

“Democrats are rats!” yelled Mr. Scavo’s wife, Caren, a local hair stylist who had started crying. She and others contended that he should have doubled down rather than apologize for the posts, as he did in the closing days of the race.

“I’m furious,” said Laureen Cummings, an Old Forge resident who is also a county commissioner. “Our poor president is getting hammered and the same thing happened to Frank.”

Another man interjected: “This is our tea party!” Big applause followed.

Far from the power centers of Washington, the early 2020 primary states or the money-rich coastal cities that fund many national campaigns, a shift in the political winds is growing stronger.

The Republican Party and its candidates, particularly in state and local campaigns, are increasingly being reshaped in President Trump’s image, adopting his laundry list of political opponents and his willingness to go to great lengths to spite them.

Here, among Republicans in the Southeastern Pennsylvania region that has suffered with the gutting of the steel industry and the ravages of the opioid crisis, Mr. Trump’s language is endlessly repeated. He is not ensnared in several investigations of possible wrongdoing, but the victim of a “witch hunt.” The discovery of Mr. Scavo’s anti-Muslim Facebook posts was the work of the “fake news media.” The federal bureaucracy is the scheming “deep state.”

But the most common reflection of Mr. Trump’s brand of grievance politics — and the reason Mr. Scavo’s loss was treated as an existential threat in that Old Forge banquet hall — was the pervasive belief that the country is being undermined by undeserving outsiders and the Democrats who represent them. 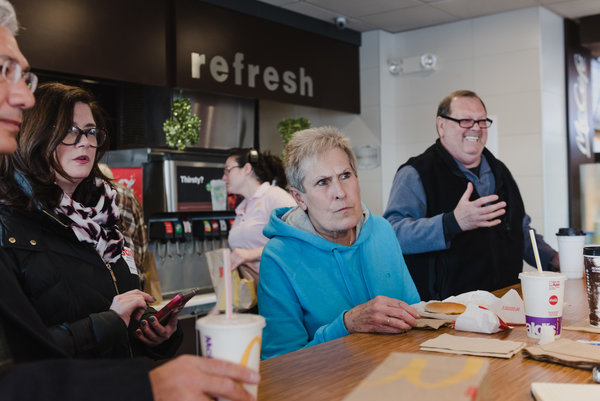 In conversations with Mr. Scavo and his all-white supporters, this was not a race-blind anxiety, but a conscious fear around what they see as the replacement of traditional, white American culture. The message was constantly amplified by ominous reporting and commentary from conservative, pro-Trump media outlets.

Thomas Bremer, a 67-year-old Vietnam War veteran and notary public who lives in nearby Olyphant, said America’s current course was akin to “a shaking roller coaster where no one knows what’s going to happen.”

“I’m scared for our children because of what’s coming with socialism,” Mr. Bremer said. “We’re a big country, but we’re being swallowed by people coming in.”

In recent weeks, prominent supporters of Mr. Trump, such as the Fox News personalities Jeanine Pirro and Tucker Carlson, were widely criticized for comments that questioned the patriotism of Muslims, demeaned black Americans, and warned that continued immigration could permanently disrupt America’s social order.

But to many in Lackawanna County, which has long trended Democratic but only narrowly went for Hillary Clinton in 2016, such feelings are integral to the worldview of local Republicans. In Old Forge, the region’s most conservative bastion best known for the unique rectangular pizza slices it developed to serve to nearby miners, the sentiment is widely popular.

The community’s mayor, Robert Legg, is currently embroiled in scandal after he posted on Facebook that the New York governor, Andrew M. Cuomo; the House speaker, Nancy Pelosi; and the Senate minority leader, Chuck Schumer, are treasonous and “should be shot.”

Frank Scavo Jr., the candidate’s father, said: “I’m a son of immigrants from Poland, from Wales, from Italy, from Australia, but back then, there was assimilation happening. That’s the way it’s supposed to be.”

Over a bowl of stuffed pepper soup, he cited a statistic that is notorious among the group: that nonwhite Americans were expected to outnumber whites in the coming decades. (The Census Bureau says by around 2045.) The older Mr. Scavo said America was a product of “Western civilization” and that the changes could threaten that legacy.

Bob Bolus, a 76-year-old local businessman in the trucking industry who owns semitrailers covered with pro-Trump and anti-Hillary Clinton paraphernalia, said Mr. Trump was a champion for white interests. Mr. Bolus voted for Barack Obama in 2008, but said he became enraged when Mr. Obama weighed in on issues of racial bias among law enforcement.

Mr. Obama “was prejudiced against white people,” Mr. Bolus said. “Trump has put the reins on the horse.”

Like others, he mentioned a 2009 incident in which Mr. Obama took issue with the police conduct in the arrest of the Harvard professor Henry Louis Gates, who is black. Mr. Bolus said it was a turning point in his personal politics.

The statements reflect the continuing push-and-pull among national Republicans, who have wrestled with how to deal with such overt appeals to white identity, particularly in the era of Mr. Trump.

The Republican National Committee and its affiliates have long insisted that they remain a big tent, open to people of all races and backgrounds. However, some former Republican leaders, pollsters and former candidates say Mr. Trump has brought formerly fringe sentiments of explicit nativism and racism to the fore — and the result is a party that is growing more racially monolithic in an increasingly diverse age.

During last year’s midterm elections, Republicans fielded a nearly all-white slate of candidates for governor. In the House, 90 percent of the Republican caucus is now white men, while about two-thirds of the Democratic caucus is not.

But locally, Mr. Scavo’s supporters — many of whom vocally supported Mr. Trump’s re-election — are unsure such a dichotomy is a problem. Mr. Scavo said his fatal election mistake was taking the advice of outside Republican groups and not going with his gut, which would have focused less on eliminating taxes and promoting smaller government and instead prioritized more Trumpian issues such as the wall on the southern border and MS-13 gang violence.

Across the country, other Republican state officials have gone further, including an Arizona state representative, David Stringer, who said this year that “there aren’t enough white kids to go around” in the state’s public schools.

Daniel Squadron, the former New York state senator who leads Future Now, a national organization to help elect Democrats to state legislatures, said he cautioned people against thinking the wave of overt white identity politics is simply an offshoot of Mr. Trump.

Mr. Squadron pointed out that, in the Pennsylvania race, Mr. Scavo’s controversial social media posts began before Mr. Trump’s candidacy. Other candidates in this mold, such as the Alabama Senate candidate Roy Moore, won support of local Republicans even though Mr. Trump had endorsed Mr. Moore’s opponent.

“It’s not about Trump,” Mr. Squadron said. “It’s about a mind-set, a conspiracy theory, an ethnonationalism that Trump reflects.”

“We should stop thinking of these races as ‘Trump-ized’ because they’re about ‘Pizzagate’ and racial and ethnic division and fear-mongering,” he said. “That’s just how races are run on the Republican side these days.”

Mr. Scavo and his supporters largely agree. Mr. Scavo called himself “pro-wall, not pro-Trump,” and Mr. Bolus said he worried the Republican establishment fails to understand how fiercely Mr. Trump’s supporters are committed to their cultural ideals.

Lynne Kokinda, 62, who volunteered daily for Mr. Scavo until Election Day, said she felt the country is at a tipping point. Gregory Griffin, a 64-year-old retired corrections officer, blamed Mr. Obama’s presidency, along with the news media, for “stirring up racial strife.”

He took particular issue with the Black Lives Matter movement against police brutality.

“It should be ‘police shoots citizen who resisted arrest or had a gun,’ but it’s usually portrayed as ‘white police officer shoots black male’ and that’s stirring the pot,” Mr. Griffin said. “That’s causing the black people to feel like black people are getting assassinated.”

He cited two Democrats who are an increasing focus of Mr. Trump’s base — Representatives Alexandria Ocasio-Cortez of New York and Ilhan Omar of Minnesota. Carol Huddy, 71, said that preserving “our culture” was the era’s defining issue — regardless if Mr. Trump is in office.

“We may be far away from the border, but they’re here and they’re coming here,” Ms. Huddy said, initially refusing to define “they.”

And then Ms. Huddy leaned in.

“I’ll give you a hint,” she said, whispering, “They have names like Vasquez and Hernandez.”