Home » Politics » General Election 2019: What is the result in my area? – Enter postcode to find out HERE

General Election 2019: What is the result in my area? – Enter postcode to find out HERE

Prime Minister Boris Johnson’s Conservative party have secured a majority in a landslide election win. Several seats were taken back from the so-called Labour Red Wall, but who won in your area?

The Conservatives won Thursday’s election taking 364 seats or 43.6 percent of the vote.

The party needed 326 seats to have a majority, and so Mr Johnson’s party are now in charge of the country once more.

It was a devastating night for Labour, who lost several seats in previous red strongholds to the Tories.

Mr Corbyn said: “This is obviously a very disappointing night for the Labour Party with the result that we’ve got”..

But who won in your area? Just pop your postcode in below to find out.

In a victory speech in central London Mr Johnson said: “With this election I think we’ve put an end to all those miserable threats of a second referendum.”

“You may only have lent us your vote and you may not think of yourself as a natural Tory.

“And as I think I said 11 years ago to the people of London when I was elected in what was thought of as a Labour city, your hand may have quivered over the ballot paper as before you put your cross in the Conservative box and you may intend to return to Labour next time round. 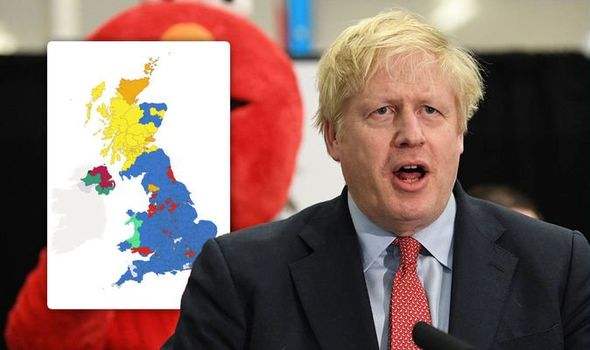 Elsewhere, it was also a disappointing night for Liberal Democrat leader Jo Swinson.

Speaking after the results she said: “Let me say now, for millions of people in our country these results will bring dread and dismay and people are looking for hope”.