The online survey by Express.co.uk found a huge 96 percent of readers will go to the polling station on May 23. Despite voting to leave the European Union almost three years ago, the British public show no sign of losing interest in Brexit, Brexiteers or Remainers. The Express.co.uk poll between 1.41pm on April 25 to 2.30pm on April 26 asked 7,660 people ‘Will you be voting in the upcoming EU elections?’

Britain is almost certain to take part in the process to elect their MEP to Brussels after the European Union granted the UK an extension to Article 50 to October 31.

Meanwhile it is thought Theresa May is considering bringing her withdrawal agreement to the House of Commons for fourth time before the elections take place. 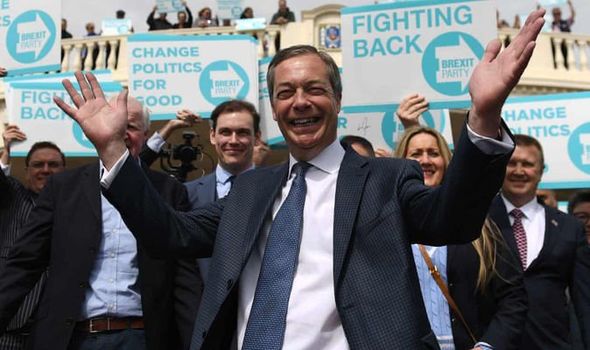 ITV political editor Robert Peston claimed Mrs May would put her deal to another vote without the controversial Irish backstop.

Mr Peston said: “I am told the PM is giving serious consideration to introducing the Withdrawal Agreement Bill to the Commons but with the Northern Ireland backstop stripped out – in the hope it shows, like the Brady amendment, that her Brexit would be approved without it.”

Pressure has been ramped up on the Prime Minister to deliver the will of 17.4 million people, after Nigel Farage made a shock comeback into frontline politics. 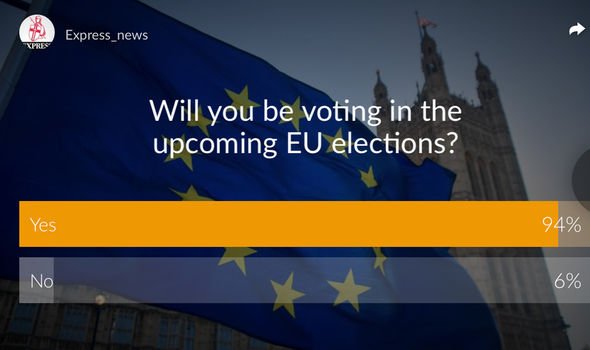 Mr Farage has fronted the new Brexit Party which is ahead in many leading opinion polls and risk handing the conservatives a thumping loss in the EU elections.

Mr Farage was in Westminster on Tuesday and stated his intentions to go after Labour voters, he also insisted the party was already “doing very well” with tory voters.

He said: “There are five million people that voted for Jeremy Corbyn and voted for Brexit as well, and that’s going to be our task.

“I think we will go on squeezing the Conservatives and squeezing Ukip down to virtually nothing.

“We’re going to go after that Labour vote in a very big way.”

The elections will be held between May 23 and 26 where a total of 751 MEPs will be chosen to represent the EU’s members states.

However, if Britain leaves the bloc before the elections start they will not need to take part – and the seats will be reduced to 705.