The rogue capitals refused to sign up to new rules that would tie European budget handouts to good behaviour. Budapest and Warsaw’s move leaves the EU’s €1.8 trillion financial package in serious with member states left to find a fresh agreement before the end of the year. A senior European diplomat described it as a “crisis” for the bloc at such a late stage in the process.

The insider said: “This will delay the implementation of all of this and will make it impossible to pay out money as early as possible.

“I think we’re aware of the huge economic and social crisis, which will now be aggravated now by the second wave of coronavirus – time is really of the essence.”

The Polish and Hungarian ambassadors blocked the so-called rule of law mechanism during a critical vote on the policy during a private meeting in Brussels. 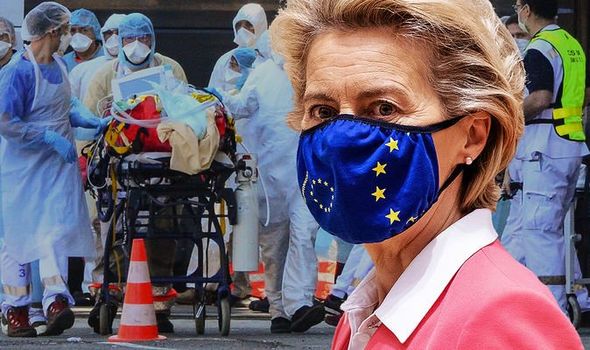 EU states want to force eurosceptic governments to sign up to the bloc’s values and democratic principles before they can receive funds from their €750 billion coronavirus bailout, for regions and economies blighted by the pandemic.

The mechanism was largely seen as a crackdown on Budapest and Warsaw, which are often at loggerheads with the European Commission over alleged breaches of the bloc’s rules.

The recovery fund was linked to the next seven-year budget package, which must be agreed unanimously before it can enter into force in 2021.