Home » Politics » Coronavirus Could Have United the Country. It Pushed It Further Apart.

Coronavirus Could Have United the Country. It Pushed It Further Apart.

PHOENIX — Soon after he woke up on Friday morning, Cruz Zepeda, a 54-year-old Trump supporter, received a text from a lifelong friend eager to share a sentiment he found on Twitter: “Looks like RBG successfully argued her first hearing with the Lord.”

Still in a bit of shock, Mr. Zepeda felt his anger rise. The friends once shared similar political beliefs, but disagreed more often than not over the past 15 years.

“This is not funny,” he shot back. “This is real time, real life and really happening.”

The pandemic could have been a great unifier — a widespread and life-altering tragedy that inspired a notion of shared national purpose, as at other moments of crisis in the country’s past. And perhaps in another moment, in another place, a president falling ill would have seen citizens keeping vigil regardless of partisan affiliation. But the coronavirus, which has sickened more than seven million Americans, including the president, the first lady and a growing number of people in his inner circle, has deepened divisions rather than united the country.

Now, a month before Election Day and with the president in the hospital, interviews with voters in some of the most contested battleground states make clear that the divisions that the president himself has stoked in the country are being reflected back at him, with his supporters defiantly insisting he will hold rallies again before Nov. 3 and Democrats, if not wishing him a turn for the worse, certainly not shedding any tears.

A day before the president disclosed his illness, Mr. Zepeda stopped by a South Phoenix campaign office in a strip mall, wearing a blue “Keep America Great” mask, to pick up another Trump-Pence lawn sign. He said several had already been stolen from his yard. In his eyes, Mr. Trump’s revelation on Twitter that he had the virus was a powerful admission to be admired.

“He doesn’t have to tell anybody,” he said.

In the same neighborhood, at a different strip mall, Sandy Kaintz, 73, saw a completely different version of events unfolding. As she walked into the Biden campaign office as a first-time volunteer, wearing a tie-dyed mask a friend had made for her, she lamented that the president hadn’t taken the same precaution, regularly wearing a face covering. Asked if she thought his illness might unite the country, she quickly replied, “I hope not.”

“Because he hasn’t done anything to unite us at all,” Ms. Kaintz added.

Ms. Kaintz said she could not recall any other moment in her lifetime when she felt so deeply distrustful of the country’s leader. She reached for a historical analogy, but could not find one that matched the kind of despair and division she now sees. “I really can’t think of a thing,” she said.

Acknowledging her age, which puts her, like the two presidential candidates, at higher risk from the coronavirus, Ms. Kaintz said she knew she probably shouldn’t be out and about, in a campaign office, prepping to hand out yard signs. “I just feel that I have to participate somehow,” she said.

There are few places in the country where difference in partisan perspectives is so obvious as it is in Phoenix, one of the nation’s biggest cities within a battleground state that has had some of the highest infection rates in the country. The alternate realities can be seen in the basic approach to the campaign field offices: The Trump operation has held in-person events for weeks, with temperature screenings but no mask requirements. The Biden team opened two local offices last week, requiring supporters to wait six feet apart outside, under stifling triple-digit heat, before quickly picking up yard signs. 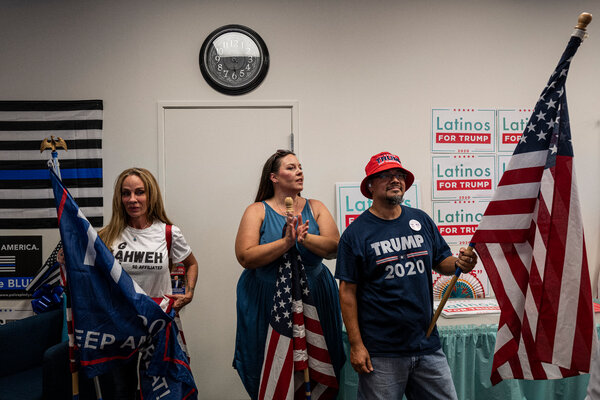 Concern over the virus in Phoenix lined up as neatly along partisan lines. After Tuesday’s debate but before the president disclosed his illness, people coming to the Trump campaign office described the pandemic as a nuisance, exaggeration or an outright hoax. Many said they thought masks should be optional, and anything else was a violation of their rights. A few people mentioned homemade herbal remedies, and said they were skeptical of a vaccine. Few said they knew anyone who had fallen ill or died from the virus.

At the Biden field office in South Phoenix, a woman waiting to pick up signs began to cry as she described the ever-climbing death toll. Nobody she knew had contracted the virus, she said. But that, she said, was besides the point — empathy should not be reserved for friends and family members.

In other battleground states around the country, the voters each campaign is working hardest to win over churned with a chaotic mix of thoughts and feelings on Friday, including concern for the country if Mr. Trump’s health worsens, private (and not so private) gloating, and resignation that what might have been a unifying national moment, most likely will not be.

Mostly, responses were filtered through the partisan lenses that have divided Americans on seemingly every issue during the Trump years, both consequential and trivial.

Supporters of the president were resolved to keep working on his behalf, and speculated that he would be back holding rallies soon enough.

Many Biden supporters expressed varying degrees of satisfaction that Mr. Trump was experiencing a karmic shock after half a year of playing down the pandemic, which has claimed more than 205,000 Americans.

In Philadelphia, Eric Johnson, a roofer who supports Mr. Biden, hoped the illness might lead to change in the president’s attitude. “It will open his eyes now,’’ he said.

Joyce Brodsky, a retired art teacher in Kewadin, Mich., noting how Mr. Biden and his wife, Jill, extended sympathy to the Trumps, said she was unable to feel so selfless.

While some Biden supporters spoke of the president’s illness as payback — for holding rallies, mocking Mr. Biden for wearing masks, generally refusing to wear a mask himself — Cliff Canaan, in Philadelphia, had only one comeuppance in mind: being able to vote Mr. Trump out on Nov. 3.

“I think it’s very important that the people have their say in rejecting what he stands for,’’ said Mr. Canaan, 31, a software manager for a bank. “I don’t want him to resign or be out of office in any other way than by the ballot box.”

Many Biden supporters expressed the hope that Mr. Trump and his ardent base would stop turning health experts’ guidance into cause for partisan warfare. But that seemed unlikely.

On Friday, even as the positive tests of the president, first lady and others around them were announced, Republican lawmakers in Wisconsin joined a lawsuit to block a mask mandate issued by the Democratic governor. The virus is surging in the state, with 17,000 new cases in the past week.

Mr. Trump’s supporters, for their part, were eager to wish him well, and move forward.

Mira Katerinos, 59, a registered nurse in Waukesha, Wis., said she was a strong supporter of the president — and that, to her, he appeared strong physically and mentally. “Trump will probably do more campaigning with Covid than Biden with no Covid — he hardly seems to be campaigning at all,” she said, repeating a common Trump campaign criticism of his opponent’s schedule. She said she saw no problem with Mr. Trump resuming rallies after recovering, which she expected him to do.

In Clinton Township, Mich., Jared Maynard, also thought life would continue as usual. He said he would continue to knock on doors, trying to convince voters in the key county of Macomb that the president deserves re-election.

“For me, I’m already taking precautions, so I’ll wear my mask and try to social distance,” said Mr. Maynard, 40. “The president will put his health first and the campaign will move on.”

Politically, few voters expected Mr. Trump’s personal encounter with the coronavirus would shake his supporters’ faith in him.

Jeff Litscher of Stetsonville, Wis., said he thought — he “was naïve enough to think” — that some people might take down their Trump signs after the revelations, in Bob Woodward’s latest book, that the president privately admitted the risk of the virus while playing it down in public.

“But if anything, they have multiplied,’’ said Mr. Litscher, the host of a radio show in Wisconsin’s Northwoods who plans to vote for Mr. Biden.

Just as the Trump signs multiplied around the country, many people spoke of divisions multiplying, too.

Mr. Zepeda, the Trump supporter in Phoenix, sees this up close.

The pandemic has taken a toll on him: He has been laid off from his job, and he believes he might have had the virus when he was seriously ill in February. He is awaiting an antibody test.

He does not blame President Trump for any of this, and views him as a relentlessly strong leader.

He is aware, though, of how much harder the Trump era has made it to really talk to people. He proudly describes himself as “Mexican with a gay daughter, with a Black grandchild” but worries that, despite the different worlds he has footholds in, 2020 is a tipping point that will prevent discussion of differing political views because the divides are so entrenched.

When he thinks about people he disagrees with, liberal friends who object to his support for the president, he can’t imagine having real conversation.

“There’s no listening, there’s no nothing,” he said.

Reporting was contributed by Kathleen Gray in Michigan, Jon Hurdle in Pennsylvania, Kay Nolan and Tom Kertscher in Wisconsin, and Hank Stephenson in Arizona.